Watching the Olympics, or Not 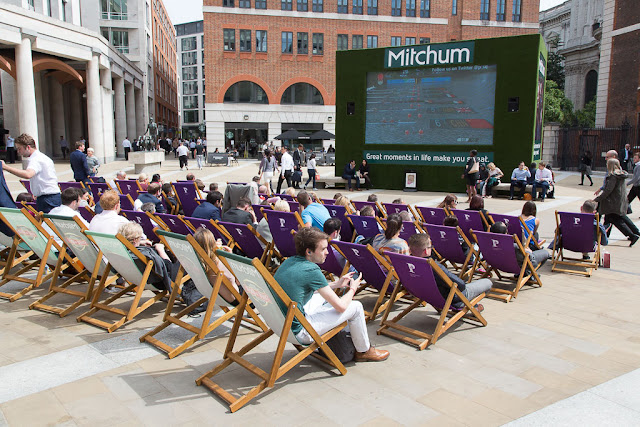 The other day, when I was coming home from the Tate Modern, I came across this scene in Paternoster Square, near St. Paul's -- crowds of people watching the Olympics on a huge monitor. Have you watched them at all this year? I haven't, but that's not unusual for me -- I've never been a big follower of the Olympics. I just get the highlights by reading the news.

I did see the interviews with the Irish rowing brothers that have been making the rounds. People are getting such a kick out of those two, their relaxed attitudes, their accents and vocabulary ("a bit of craic"). I must admit I only catch about every fifth word.

Apparently the games are going more smoothly than many people expected, despite the green water in the swimming pools. Preparing for the Olympics is always such chaos, throwing governments and citizens into a huge stew of frantic activity and public spending. It's kind of insane. And then the facilities are often left to deteriorate when the games are over. It seems like a ridiculous waste of money and energy for short-term enjoyment. But then what do I know?

Dave bought some dried pig's ears for Olga and she hasn't expressed the slightest bit of interest in them. So last night I put out the garden cam and set a pig's ear on the garden bench, thinking I'd attract the fox for some nocturnal photos. Nothing! The ear was still lying on the bench this morning. What's wrong with these pig ears?

Yesterday I took Olga to Fortune Green and the cemetery, but otherwise I spent the day reading and relaxing. I also Skyped with my mom in Florida. Our last weekend of summer vacation!
Posted by Steve Reed at 6:42 AM

As for the pigs' ears, why not follow an "Oreile de Cochon" recipe? Delicious with mushrooms, seasoning and spinach. Dave will love it.

No Olympics this time. A few weeks back, I edited a couple of manuscripts from a researcher reviewing the testing procedures of the World Anti Doping Agency which was at around the time the Russian whistleblower was banned and well, no thanks.
But I would be a sucker for the emotional scenes if I did watch.

The two lads from Skibbereen are great gas. Skibbereen is one of my favourite towns in Ireland, well worth a trip.
This one is even better: https://youtu.be/s10n_zKtBM8

Since the pig ears are generally for our domesticated dogs to chew on, rather than something they actually get sustenance from, I can understand why the fox has no time for that. But Olga?
I haven't watched any of the Olympics and I feel guilty. Then again, I feel guilty about everything.

I haven't watched one bit of the Olympics. Just not interested. as for the pig ear, maybe Olga doesn't like the way it smells.

The ears probably came from CHINA, like the deadly chicken jerky for dogs and the bull pizzles. If it was a local roasted pug ear my guess is that she would devour it if you did not make a sandwich out of it first.

I looooove the Olympics, but then, I am Jamaican born and raised, and track and field is a huge tradition there. I have also been a dedicated fan of gymnastics ever since watching Nadia Comaneci perform her perfect 10s at the 1976 Montreal Games. I watched it from an apartment in London, as it turns out. Our family was in London during that period, I don't quite recall why we were there. All I remember is sitting on the floor and watching Nadia, with an acid taste in my mouth, literally, not figuratively, because my mother had painted my fingernails with some bitter tasting liquid to try and get me to stop biting them.

So am I watching? Yes. And I've got my family hooked, too. And everyone who comes through our door inevitably joins in. Every day. Last night we were captivated by bowl cycling. Synchronized swimming. Definitely diving (loved Greg Lougainis in his day!). Very thankful that they fixed that green pool though. That was weird.

I'm generally like you as far as Olympic watching, but this year I admit to enjoying the swimming and now the track and field. Last night, I practically cried when the South African runner won, and of course, there's Usain Bolt. Irresistible.

Not a fan of any kind of competitive sports so the Olympics don't really interest me. That being said, if I happen to come across them on a screen I am hooked by some - gymnastics comes to mind (and skating and skiing at the winter games). But I never feel the urge to search them out. And the curling at the winter games drives me INSANE with all the yelling of "hurry, hurry hard" - gah! (my husband likes it and usually watches at full volume, which I don't understand as they never say anything sensible :))

I don't watch the Olympics. They are disgustingly corrupt and elitist. the whole concept is about money.

Interesting that someone set up that giant screen for the public to watch. Personally, the only things I've seen are the highlights on the news or bits and pieces on the TV screens at a restaurant when I'm having dinner with friends. I did happen to catch a few minutes of some gymnastics while at a restaurant and was totally impressed with some of the amazingly graceful landings I saw. That takes some powerful legs!

I've not seen much, but love how your city and others in Europe offer public viewing!

YP: I'm not sure I would be physically capable of staying up until 2:30 a.m. anymore. I admire your tenacity!

Sabine: Yeah, I saw that one too! Those guys crack me up. The doping thing is such a disappointment.

Ms Moon: I guess that's true -- the pig's ears aren't really for eating so much as chewing. But still!

Ellen: There's definitely something about it that doesn't appeal to her. We may have spoiled her with pork chop bones.

Linda Sue: It's possible! No pig ear sandwiches for me, though. :)

37P: I have a feeling if I turned on the TV -- or came to your house -- I'd get sucked in! It's just not something I think to turn on myself.

Elizabeth: As you can imagine, Usain is a national hero here!

Jenny-O: That's exactly how I feel about the Olympics. If I came across them I'd watch, but I'm not going to make an effort. I remember watching curling at the last winter games because the guys on the Scottish team were so adorable!

Red: And yes, that's the flip side of the Olympic coin. It is a huge, huge racket. The doping scandals have proved that.

Sharon: Gymnastics is one of the more watchable events, I'd wager. Apparently Mitchum sponsored that screen. Yay for deodorant!

E: Yeah, the public viewing opportunity is kind of cool. I didn't sit down, though. :)