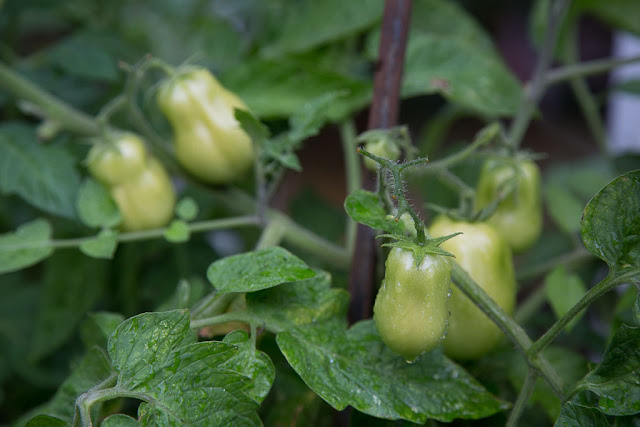 These are our tomatoes. We have one bush -- which I'm told by a British friend I must call a "tomAHto plAHnt," and not a "tomAYto bush" in my American way. It's growing in a big pot on the patio. We were optimistic about this bush because it set several clusters of fruit and seems vibrant, and, well, bushy. We've had no signs of blight or yellowing or anything like that.

But we're a bit concerned because the fruit isn't ripening. Day after day, week after week, it's still hard and green. We water it like crazy, but overall the summer temperatures have been fairly cool, and that seems to have slowed our tomAHto development. Supposedly we're going to have a warm week and I hope that pushes them over the edge. 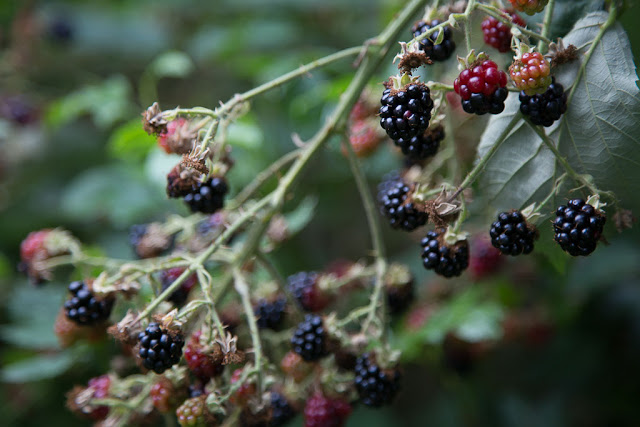 And these are our blackberries, or were when I took this picture on Aug. 24 -- they don't look this good anymore. They're fading, coming to the end of their season. Most of these black ones I ate, though I left some for birds.

I met an old friend, Greg, for lunch yesterday near Baker Street. I haven't seen him for at least ten years. We worked together about 20 years ago at a newspaper in Florida, and it was good to see him and catch up on his life in Oregon, where he lives now. He says Portland is a strange town -- the TV show "Portlandia" come to life. People with unusual facial hair riding unicycles to work -- that kind of thing. You can buy "scented toast" at restaurants. Esoteric! I had fancy mac n' cheese for lunch, which seemed a bit hipsterish, in the spirit of the conversation.

I'm rethinking my decision not to continue my French classes. I still have time to sign up, and I think I may do so. The thing is, once you've invested time and money in learning a language, you don't want to lose it -- so you're on the hook for more lessons. I promise I won't complain if I re-enroll! (Well, not too much.)
Posted by Steve Reed at 6:36 AM