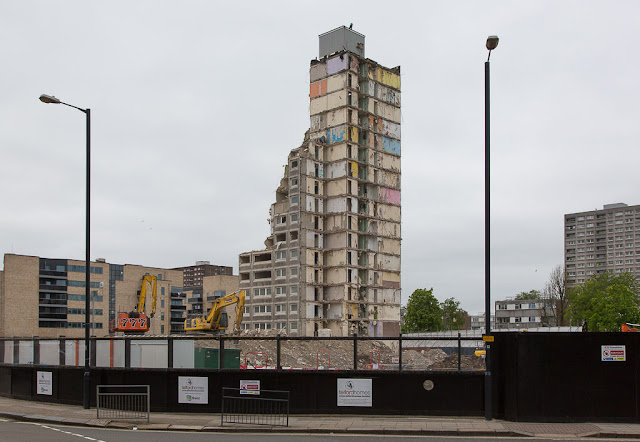 Dave and I took the bus yesterday afternoon through South Kilburn and saw that more of the old council estate there has been demolished. When I photographed the area last fall many of the buildings were already empty. Now they're coming down.

Here's a shot from last September from almost the same perspective, just for comparison's sake. 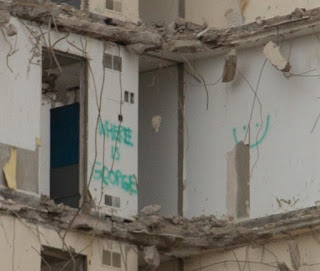 And here's a super-close up of the shot above, showing some of the graffiti on the inside of the demolished tower. I wonder if the demolition workers painted it? And yes, where is George? Hopefully not in that building.

This is part of a much larger regeneration scheme for the South Kilburn neighborhood. Brent Council has a web site with the details, but it looks like they're replacing the old high-rises with a mix of new low-rise housing, some affordable and some for private sale.

Anyway, Dave and I just happened to pass through on the way to lunch with our old neighbors Chris and Linda in Notting Hill. We met with them in our old 'hood and went to a strange and incredibly noisy little restaurant, part clothing boutique and part cafe, where I had French toast. We also had a chat with our old neighbor Joan, and saw Charlie, who still stands guard on her balcony at the ripe old age of 15.

Then Dave went home and I went back to Selfridge's on Oxford Street, where I exchanged the pants (trousers, to the Brits) I bought Saturday for a more comfortable pair. Still black, but cut straight-leg rather than slim. I think I'll be much more inclined to wear them!

Then I climbed back on the bus and came home. 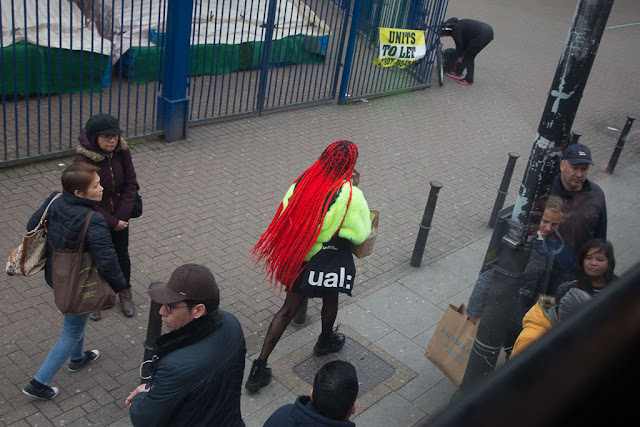 This woman sat behind me on the bus. She talked into a pink sparkly phone the whole time, and kept repeating, "May, I told you. It's the best when you're drunk. I told you, May."

I wondered whether she was trying to remedy May's drunkenness, or enhance it. But then she got off the bus, so I'll never know. 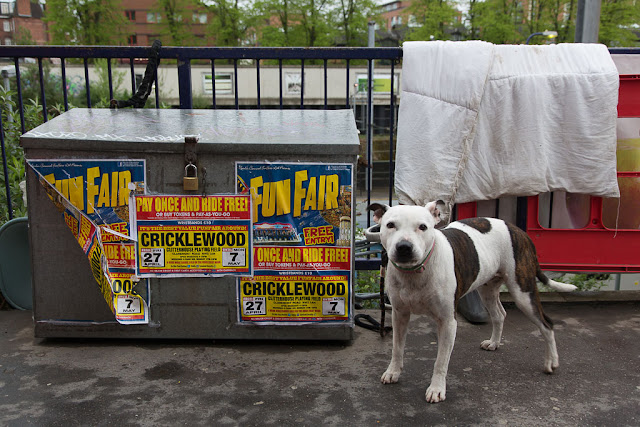 Despite all this activity, Olga was not neglected. She got a good long walk in the morning. We paused for a photo beside some colorful posters (and someone's old duvet, apparently?) near the Thameslink station. 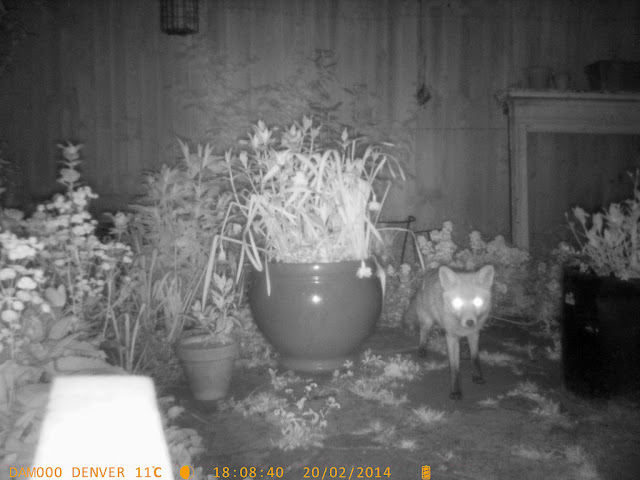 And here's a new shot from our garden cam -- a nocturnal visitor! (The date and time stamps are completely wrong. I've just never gotten around to setting them correctly.) I haven't seen a fox out there in a while, so I'm glad to have evidence that they're still coming around. I wish they'd eat the slugs!
Posted by Steve Reed at 6:32 AM