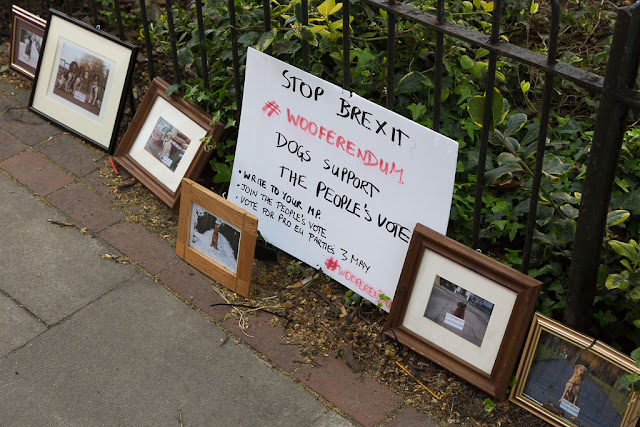 English local elections are scheduled for Thursday, and in the run-up to the vote these signs and photos have been appearing around West Hampstead.

They show dogs urging support for a "wooferendum" to stop Brexit.

There's nothing like pet-friendly humor to advance a political goal. As much as I'd like to put the brakes on Brexit, at first this seemed like too little too late. Isn't that decision already water under the bridge, or kibble down the gullet? If so many dogs are indeed Remainers, I wish they'd had their "wooferendum" back in the disastrous spring of 2016, along with the rest of Britain.

But specifically, the dogs want us to write our members of parliament and elect pro-E.U. candidates, as well as support "The People's Vote," a group pushing for a final public vote on the negotiated Brexit deal. (In effect, a second referendum.) I guess that's why they're stepping forward now. Better late than never, Fido.

(There are bound to be Leaver dogs, aren't there? English sheepdogs? Welsh terriers? I'd say Staffordshire terriers, but I'm pretty sure Olga is neutral on the Brexit question.) 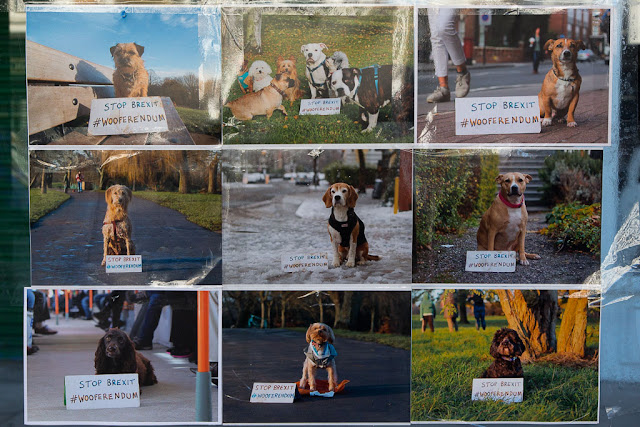 There was an article about "wooferendum" in the newspaper, but puzzlingly, it didn't quote any human beings -- just a terrier named Lily. It's been a while since I've worked in journalism, but I'm pretty sure my editors would have pulled the plug on a story whose only named source was a dog.

The Pied Piper of Hamelin led the town's children to a great cave on the edge of the town. They had no idea what was about to happen. Effectively that is what the Brexiteers like Johnson and Fox and Gove did to to the British electorate - aided of course by cunning Russian interventions in social media. I can see the cave opening just ahead and it's very dark in there.

What a weird world we live in.

Funny post. I was under the impression there might be another Brexit vote, given the shenanigans of cambridge analytica during the first one. where did i get that idea?

all the people who didn't vote because they thought it wouldn't pass, I guess.

Very cute photos of those political dogs. If they can be interviewed for a newspaper article, shouldn't they be able to vote?

Dogs are so smart. Listen to the doggies, I say.

Yes, it's just sad how journalistic standards have declined. But Robin is right. Dogs are smart. And too damn cute.

People need a outlet for high feelings, and this is one way to do it and have a laugh at the same time - what a good idea :)

This is Monty Python-like. The world is nuts.

Ha - love this! But I feel like that if dogs could vote their platform would be More Kibble & Walksies for Everyone!