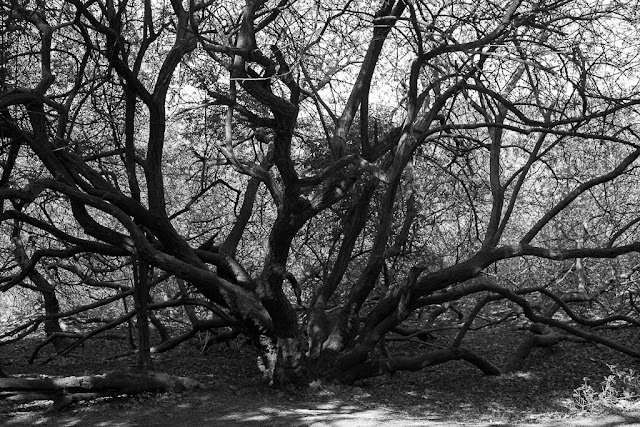 I got an e-mail from Match.com yesterday warning me that my profile was about to be deleted. Since I haven't logged on to Match in at least a decade, and I'm sure I deleted my profile (or at least removed it from public view) long, long ago, I suppose that's fine. Or has it been public all this time and no one has tried to date me?! There's a sobering thought.

We had great news on the apartment yesterday -- the landlord is renewing our lease. Whew! I can't tell you how relieved that makes me. I had visions of putting all this work into the flat only to be kicked out. And the rent's staying the same.

I had a gin & tonic in the garden last night to celebrate. Dave, who is abstaining from alcohol these days because of his Crohn's, sat with me and absorbed it vicariously. 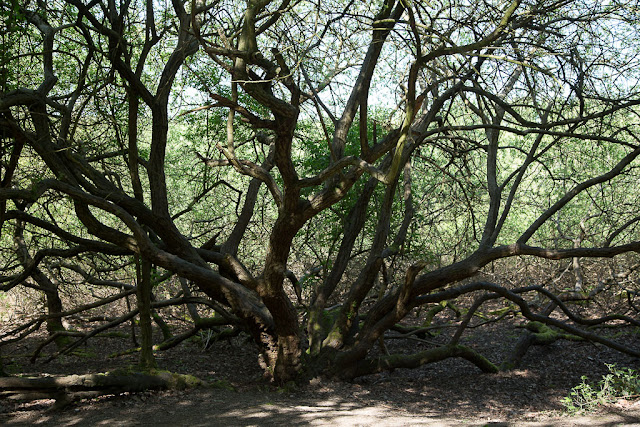 I took this photo on Sunday in Trent Country Park. My initial impulse was to make it black and white, because that seems to emphasize the shape of the bush more -- but on second thought I think it works in color, too.

Dave and I have started watching a fascinating Netflix show called "Dirty Money," on the recommendation of some coworkers. It's basically a series of hour-long documentaries about people and corporations whose ill-gotten gains have landed them in trouble. If I'm not mistaken, one of the episodes is about Trump. We're only two episodes in, but we like it a lot!
Posted by Steve Reed at 6:50 AM

I forgot to comment on your crow and hawk photo on a previous post!
The hawk is in fact a buzzard !
I know such a pedant

Moo! Moo! It's those cow workers again!
I am pleased to hear that your lease has been renewed and that your exorbitant rent is not about to become more exorbitant. The landlord is lucky to have tidy, reliable tenants.

Your landlord knows how lucky she is to have such responsible tenants and I bet the cute dog doesn't hurt.

I would love to know how to imbibe a G&T by osmosis -- it would save me a lot of calories. But the few times that I have tried have been terribly annoying, like being a wallflower at the party. In my opinion, synthetic alcohol can't hit the market soon enough.

We here on the north shore of Long Island (New York) have not yet had a seasonable evening to make sitting out in the back yard feasible, but here's hoping that we might reach critical warmth this weekend, and if the weather patterns permit we can line up the Adirondack chairs with the flight path of jets to JFK airport and catch the livery of all the planes coming in from all around the world. (It's like train spotting, but in the privacy of one's own garden and with drinks.) We especially like seeing the 5:38 from LAX. Love the flying kangaroo.

What a beautiful tree!
And congratulations on your renewed lease. If you and Dave aren't the perfect tenants, I don't know who would be. I'll check out that series.

I like both photos. I'm glad your lease got renewed - that's excellent news! I'm also in Camp Hawk :)

On the buzzard/hawk issue -- according to Wikipedia, the word "buzzard" is used as a common name for a whole bunch of birds, including hawks! So I'm not sure what the difference is, to be honest. I always thought of buzzards as more like vultures -- but maybe not, or maybe the usage is different in the UK. That bird is definitely what I would call a hawk. (And apparently the rough-legged hawk is also called the rough-legged buzzard -- so if that's what it is, maybe we're all correct!)

You sometimes wonder what's floating around these days about your personal details.

Congrats on your lease renewal. You and Dave really are the best tenants. You take such good care of everything. Beautiful tree there.

I like the color shot the best but, I always tend toward color over black and white. Congrats on the lease renewal. That Netflix series sounds interesting.

Congratulations on your lease renewal and especially with the same amount. That's always a plus.

Black and White has more drama. It is worthy of poetry! Jealous of your G&T in the garden, I can not drink anything but water and broth these days, until bone grows...drat!

I guess I like the color photo more because it provides more depth and interest. However, they are both good. I bet Match contacted you (and other deleted account owners) saying they would delete it as a marking tool to make you sign up again.

Yes, that photo certainly works in color, but the black and white renders that tree deeply mysterious! And I'm happy to hear the news about your landlord renewing your lease. He knows good tenants.

No doubt that IS a great relief, knowing you are secure in your flat for another term. Like other readers are saying, you and Dave would be ideal tenants so it would be crazy to boot you out! (But sometimes there's no accounting for landlord decisions.)

Nice shot of that tree! I like black and white photos but think I prefer the colour version of this one.