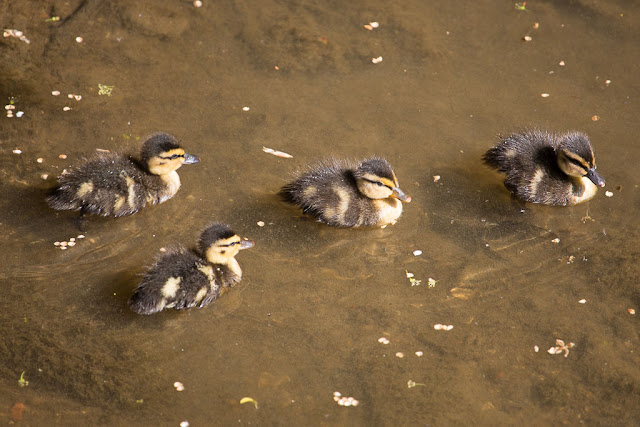 I walked two more segments of the LOOP yesterday, a total of about 9 miles. Getting to the start of the trail at Enfield Lock, where I left off last time, was a nightmare -- I wound up using two tube trains, an overground train and I'd planned to take a bus as well, but the next one wasn't scheduled to arrive for half an hour. So I wound up re-walking part of the LOOP along Turkey Brook that I'd completed last time.

The benefit, though, was that I got to see these little ducklings. 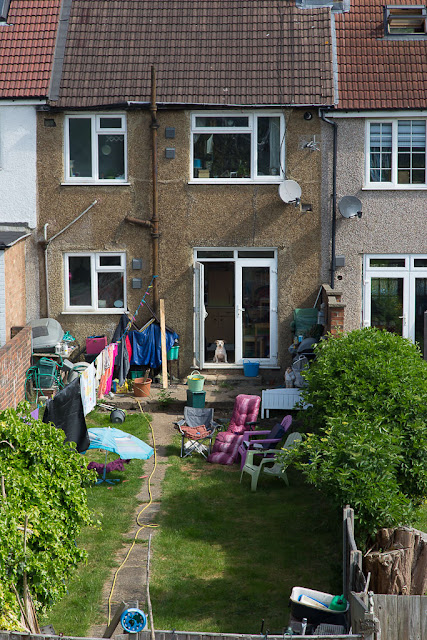 Once past Enfield Lock station, I walked past houses, over canals and across the River Lea. Can you see the dog in the doorway in the photo above? He/she cracked me up. That's just what Olga does sometimes -- sit in the sun, right at the back door, and watch the world go by. 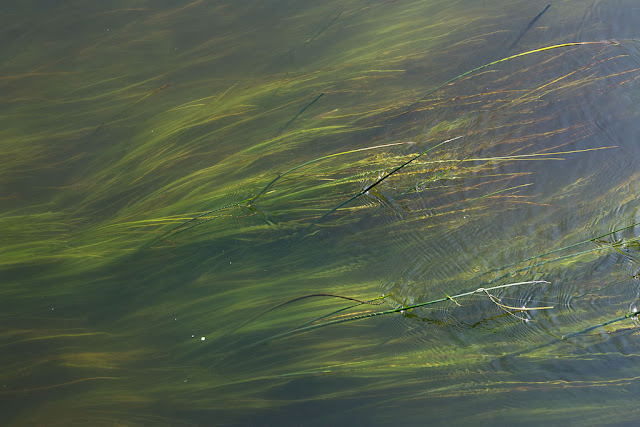 The reeds in the River Lea rippled peacefully with the flow of the current. I walked along the river... 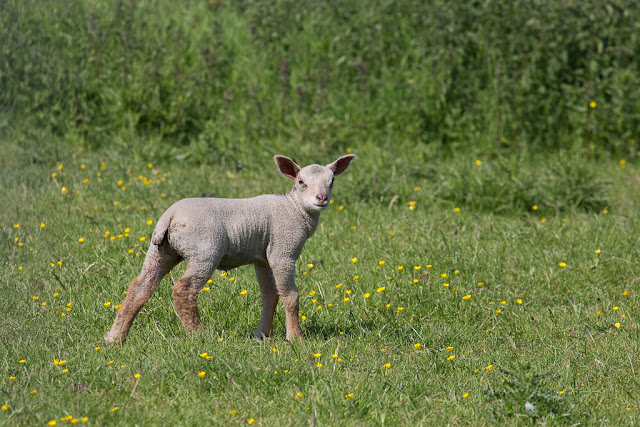 ...and past a field with some grazing sheep and lambs. This lamb was very wary of me.

From there, the path led through a marshy wildlife area loaded with blooming comfrey and cow parsley, and up a steep hill which gave me a view over North London. 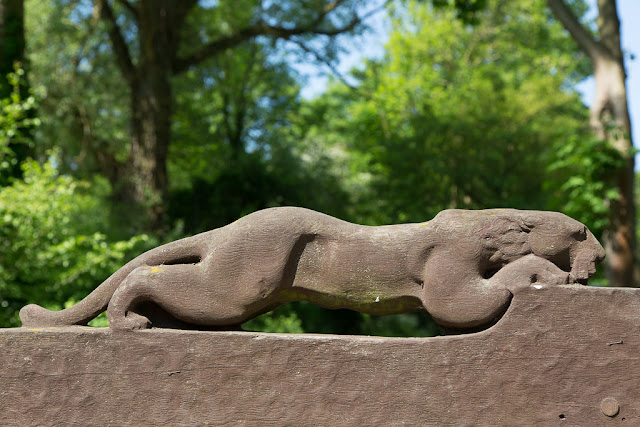 Eventually I wound up at a scouting camp called Gilwell Park. This is a detail from the "Leopard Gates," carved in 1927 by a former Boy Scout named Don Potter.

I got a bit turned around in this area, because there was no waymarker and the guide was vague on where to go. I had to ask someone at the camp, and eventually I came out onto a hilltop with a wide-open view of the city. 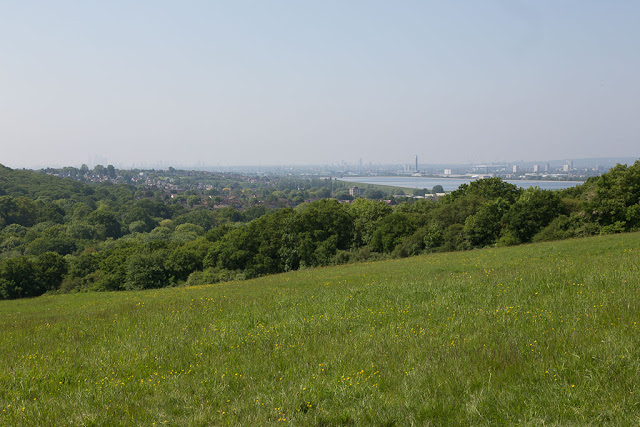 It's a bit hazy, but you can barely see the skyline on the distant horizon at lower left. At the right is one of the reservoirs in the Lea Valley that collects London's water supply. 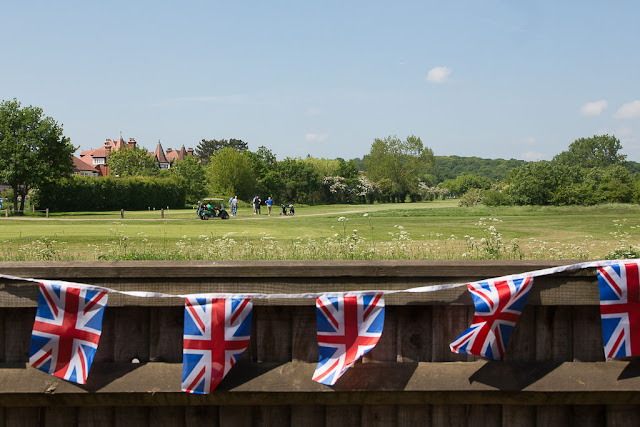 I wandered through some woods and then alongside a golf course in Chingford. My guide said: "All golfers on this course are forced by an ancient law to wear bright red whilst playing golf so that everyone else can see and avoid them. They still must do that!"

Although I saw a couple of people in red, many others were in other colors. Sure enough, apparently since the guide was written, the "ancient" red-clothing rule has been abolished. Sad!

I ate lunch (a vegetarian full English breakfast) at table outside a little cafe in the golf course clubhouse, watching golfers over a fence laden with Union Jack bunting. 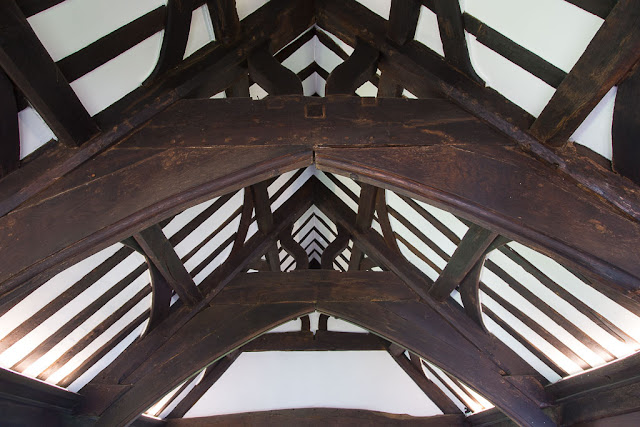 From there, the trail led me to Queen Elizabeth's Hunting Lodge, a timbered building from 1543. It's free to go inside, and it was interesting to see the timbered ceiling and walk the slightly sloping floors. Apparently it used to be a sort of open-air viewing stand from which royalty could watch the hunt on the nearby Chingford Plain, but windows were later installed and the building is now fully enclosed. 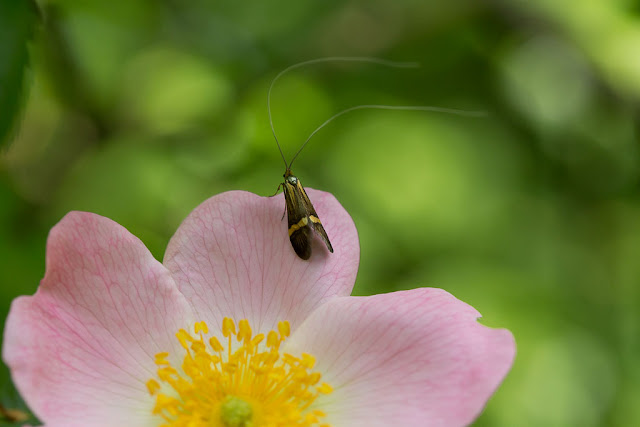 I then got thoroughly confused about where I was supposed to go, because the trail didn't seem to be where the guide said it was -- and I saw another walker who seemed to be wandering aimlessly, too, so it wasn't only me. But I found a parallel trail and eventually wound up in the right place. Near the Linder's Field Local Nature Reserve, I saw this longhorn moth with its dramatic antennae fluttering in the breeze.

From there, the path led me through the Roding Recreation Area and along the Roding River. And there, on the riverbank, I saw an EXORCISM! 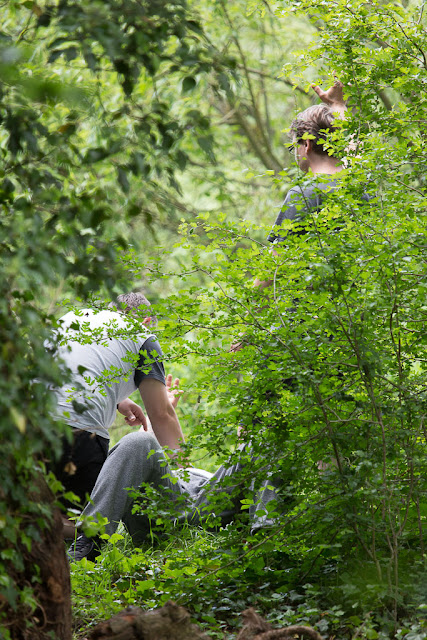 I am not kidding you. I heard some yelling and growling from a fair distance away, and I thought it was a man trying to control his dog. But no -- the growling and barking and roaring was coming from that man lying on the ground, as the others stood over him repeating, "Leave him! In the name of Jesus Christ, leave him! He does not belong to you! He belongs to Jesus!"

The man on the ground thrashed around and I was, frankly, a bit terrified. It did not seem like a seizure or anything like that. I took a couple of discreet pictures and beat it out of there. And then, after walking about ten minutes, I realized I'd dropped my glasses case -- so I had to retrace my steps, and of course it was right back where I'd taken the pictures. And the exorcism was still going on!

How long does it take to get a demon to leave someone?

Anyway, it was surely one of the strangest sights I've ever come across on any of my walks.

From there I made my way into the community of Chigwell and caught a tube train back into town. I think I can finish the LOOP with just two more days of walking!
Posted by Steve Reed at 6:40 AM