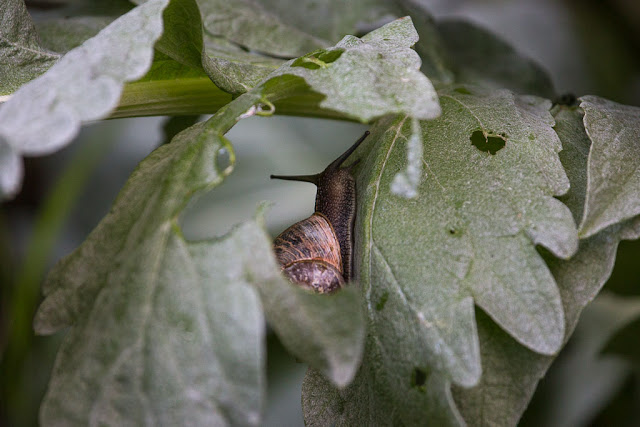 I just spent about 20 minutes, at 6 a.m., trying to get the ideal picture of a garden snail. It's surprisingly hard. You go out into the garden with your coffee on a chilly spring morning to have a look around, and you see a snail in just the right position. You have to put down the coffee, run and get the camera, attach the zoom lens, run back outside, figure out why the picture won't shoot (it's because you're standing about two inches too close to the snail for the zoom lens to focus) and then, by that time, the damn snail has moved.

Even A SNAIL is too fast for me.

Oh well. As you can see, he was having breakfast on our cardoon. I left him there. The cardoon is big enough and vigorous enough to handle it.

Last night I had to stop by Homebase again (I swear I am keeping that place in business) to buy a plastic box to lock up the dog food. The night before, I heard that nibbling sound on the dog food bag once again. The mouse was back! We still haven't seen him and he hasn't wandered into the kitchen trap. I would much rather simply discourage him by making food hard to come by than kill him outright, but if he gets into the kitchen, death awaits.

We watched "The Crown" again with Dave's parents, who spent yesterday exploring our neighborhood. There's a restaurant nearby that Dave's nieces enjoyed when they visited last year, so his parents tried it out too. They're flying back to Florida today.

I still haven't planted those seedlings.
Posted by Steve Reed at 6:25 AM

Why not pluck a snail from your garden and put it on a plate with perhaps a lettuce leaf? Then you will be able to photograph him or her or it with great ease. Afterwards you can fry him/her/it up with some mushrooms and then present Dave with a surprise tasty snack.

It’s a really good picture but snails have got to go. I’m sure they are good for something but I can’t come up with anything now.

Well, that may not fit your image of the ideal photo of a garden snail but it's still a really nice picture.
I've had mice chew through tupperware. They can be determined. I've got something now in the chicken coop that's slowly eating its way through the lid of a black garbage can.
Critters can be persistent.

I hope Mr. Mouse doesn't chew through the plastic...Sweet photo.

I've always thought that the Burgundians who invented escargot must have been starving their brains out when they decided to snack on a snail. But I also read that Burgundians used to dress their hair with rancid butter so I guess they figured, We've got a smelly dairy product on our heads so, sure, let's have a go at those slugs.

Put some peanut butter in the mouse trap and you will get a visitor.

The snail story made me laugh. Who knows how many times I've done something similar. Wildlife is never very cooperative.

I never thought to photograph a snail, but now I want to try. The thing about mice is that there's hardly ever just one. Good luck with trying to deter them. They are quite persistent.

"Even a snail is too fast for me" - thank you for a good hearty laugh :) I think it's a pretty decent photo, all things considered!

ESCARGOT! (Yes, I know I shouted.)

Sounds like the parental units are having a restful time.
And you probably don't need me to tell you that mice can (I think) saw through plastic. But as you said, at least you're slowing them down. So happy to have moved and left our herd of basement mice there. I hope.