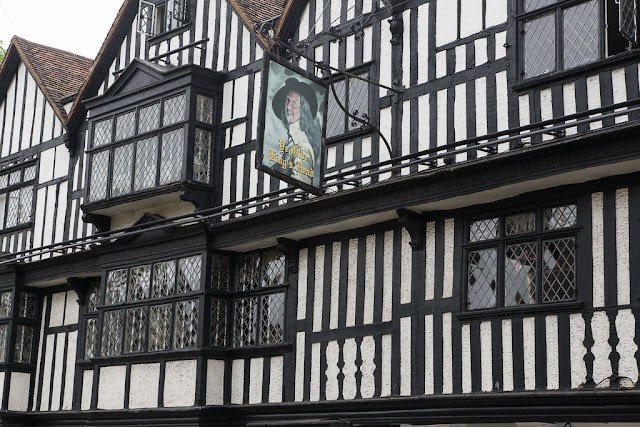 I did another ten miles of the LOOP yesterday -- the segments from Chigwell to Harold Wood, via the village of Havering-atte-Bower. This is all east of London, on its border with Essex.

It was a good day for walking, generally clear but with enough mist or cloud cover to not be blistering hot. In Chigwell I passed this impressive old pub known as Ye Olde King's Head. Apparently it's a legendary place, known as "the most famous pub in Essex" (according to my LOOP map) and a haunt of bandit Dick Turpin in the 1700s. Charles Dickens even included it in one of his lesser-known novels, "Barnaby Rudge," which I checked out from the library and meant to read last summer, but never did. Maybe now, having seen this pub, I'll try it again. 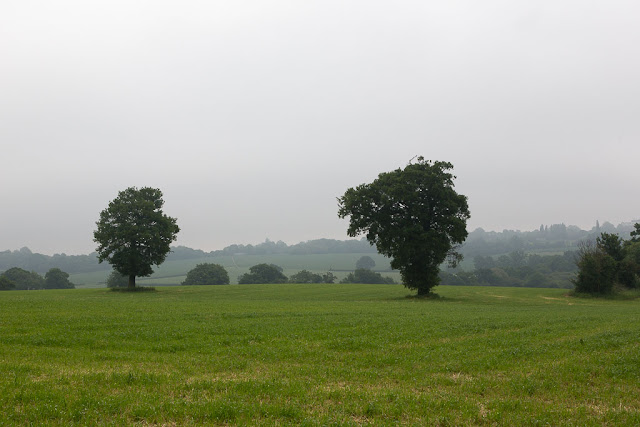 This is typical of the landscape I walked through -- lots of hills and rolling farmland. You can see how misty it was in the morning. 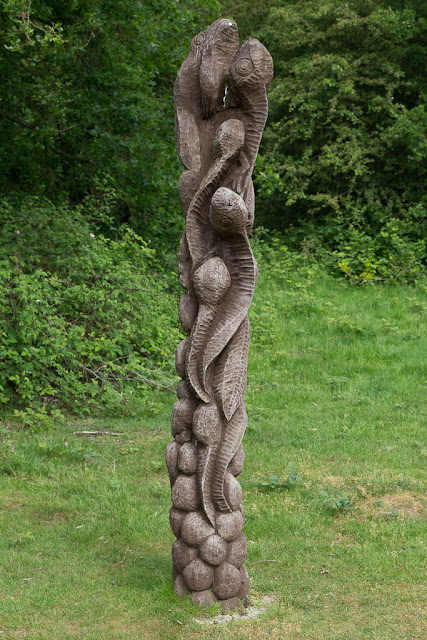 In Hainault Forest Country Park, I came across a circle of carved totems featuring different animal forms like lizards, owls and other birds. I particularly liked this one, covered with tadpoles. I have no idea what the circle is for -- there were three seats in the middle. Human sacrifice? Do they do that in Hainault? 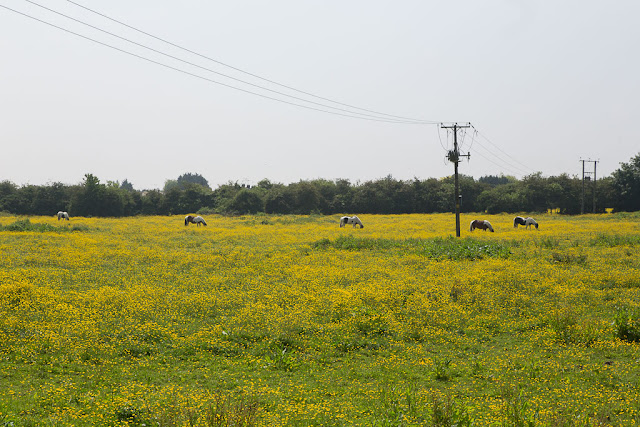 I got extremely lost trying to cross the Hainault Forest Golf Course. The directions were unclear ("cross the fairway and walk just left of a tiny grove of trees") and golf courses are so well-manicured that any trace of path is obliterated by mowing and signposts are not to be found, at least in areas of play. The maps app on my phone was useless, showing me as a dot in the middle of a featureless green expanse. I bet I wandered around out there for half an hour, grumbling, before I figured out where I was supposed to be.

After I got back on the path I passed horses grazing in a pasture full of buttercups... 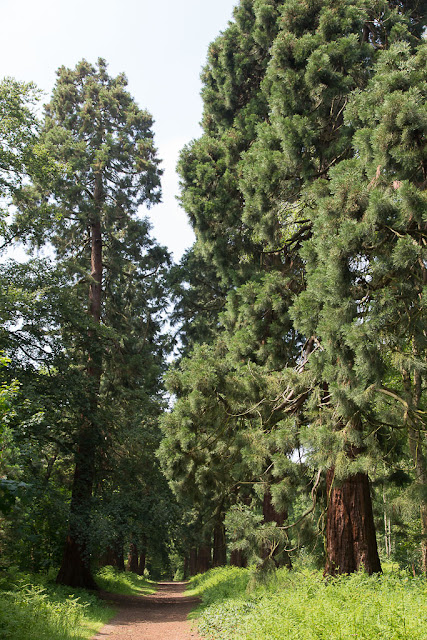 ...and eventually entered Havering Country Park, where there are giant sequoias planted in the 1800s. They're small compared to the ones in California, but then, they're just babies. 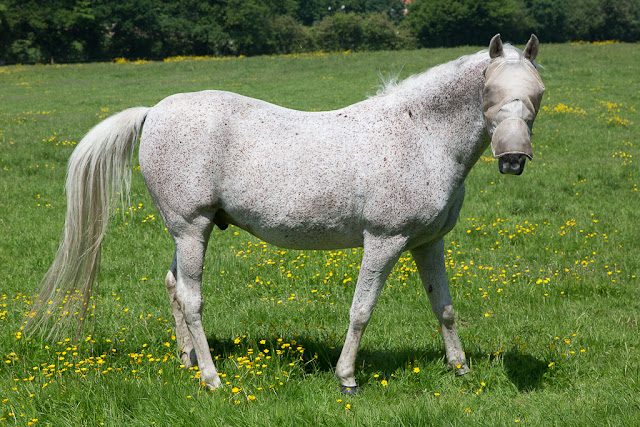 In the quaint village of Havering-atte-Bower I stopped for lunch at a tidy pub, but sadly, it had no food, and there was no other restaurant or shop in the immediate vicinity. So my lunch was a Stella Artois and a bag of Walker's vinegar & onion crisps.

I could have stopped here, after six-plus miles, but the directions for getting back to London from Havering-atte-Bower seemed complicated, with buses and a train that, yesterday, was out of service (replaced by more buses). So I kept walking.

I passed a field of horses with these strange masks over their faces. I guess it's a form of blinders, maybe to keep them from getting nervous? It gave them a sort of sinister look. 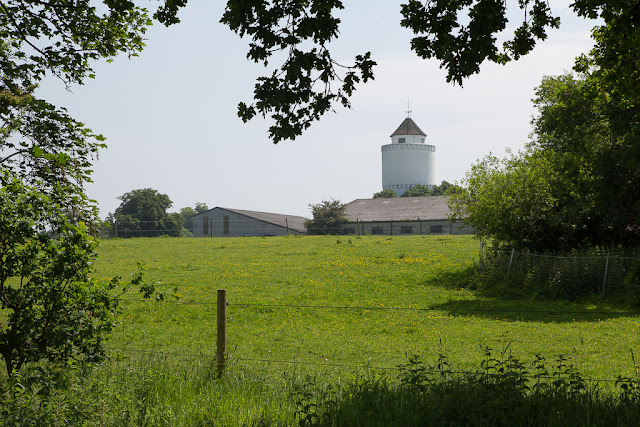 This is the "Round House," once the home of Joseph Hardwick Pemberton, a well-known cross-breeder of roses. I think Dave and I saw a segment about him on the BBC's "Gardener's World" TV show last year.

I passed the rusty iron entrance gates of Pyrgo, a former home of the Tudors that no longer exists, and along the edge of a woodland where I saw... 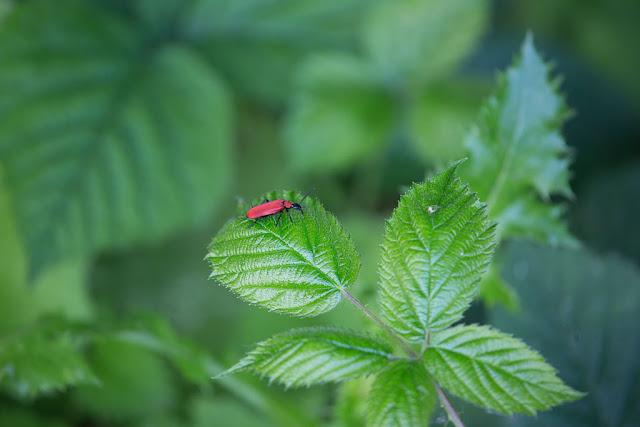 ...these bright red beetles buzzing through the air. They're called cardinal beetles, apparently.

The path took me across more farmland and along some small brooks (more like deep, wooded ditches) into the suburban area known as Harold Hill. Those waterways feed into the River Ingrebourne, which you may remember I saw at the beginning of this walk last August. 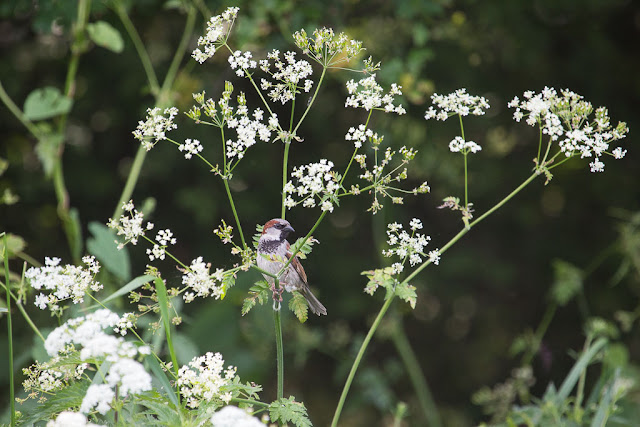 These little sparrows seemed to be hunting insects on the flowers of the cow parsley along the waterways.

Finally, I got to the Harold Wood train station, only to find that trains were out of service there too. Curses! (And I'm virtually sure I checked that on the TFL trip planner web site the night before, but never mind.) So I wound up on a bus after all, winding through Romford and Chadwell Heath on my way to a tube station. It took me about two hours to get home.

The good news is, I'm almost finished with the LOOP. I have only a short four-mile segment to go, which I hope to polish off this coming weekend!
Posted by Steve Reed at 6:58 AM

WOW all over the place! Such beauty and BY FOOT, you are a mighty walker! This is a Stellar post a Stella artois post with a bag of crisps. Sometimes I worry about you walking such great distances alone in what seems like un-populated less traveled areas. but then I remember that you are young and fit and male and have a smart phone. I will not worry anymore. LOVE this post, perhaps the horse mask is to keep flies from biting.

"A dot in the middle of a featureless green expanse"... sounds like a line from an existentialist story by Jean-Paul Sartre or Samuel Beckett. Perhaps that is all that any of us are - dots moving across the landscape.

I am already looking forward to the last four miles of The Loop.

Well. That was certainly a day's event. It bothers me that sometimes the directions are so vague and misleading. What are you supposed to do if you get well and truly lost?
And that horse IS creepy and so is that tadpole-carved stone. Is that circle a portal of some sort?
Ah well. You've seen a lot of cool things on these walks and soon you will well and truly be able to say that you have done it!

I think it is so cool that all those old walking paths are still available and that you manage to find them when the directions are vague.

What a challenge! I,m sure most people would just give up.

That was quite a journey you took. I have to admit I even get a bit anxious just reading about getting lost in an expanse of green and no discernible path. Oy. That misty sky looks so much like our month of May here. Never lifting to reveal the blue of it all. Looking forward to those last four miles. I think I may look for a map of the whole trail to take a look at where you've been. It's been grand!

So what will your next challenge be after you've finished the loop? Will you tackle the Thames path? Your walks always remind me of the Bill Bryson books "Notes from a Small Island" and "The Road to Little Dribbling". I love the Ye Olde Kings Head and I had no idea there were Sequoia trees in England. "Cardinal Beetles" is a perfect name for those red insects. Sorry it was such a chore to get back home but, look on the bright side; at least you didn't run into another exorcism.

The masks on the horses are fly shields. Flies love to sit on the horses' eyes and bedevil them. The horse can see through the mask, and is spared the misery.
You live in a beautiful place.

I find it amazing that there is so much open space so near to London. Nice walk and photos.

Splendid in every way, Steve! And the buttercups, amazing.

Out of the big smoke..what fun

That tadpole totem is neat. You've covered a lot of ground doing the Loop. It makes for a good story for the future!