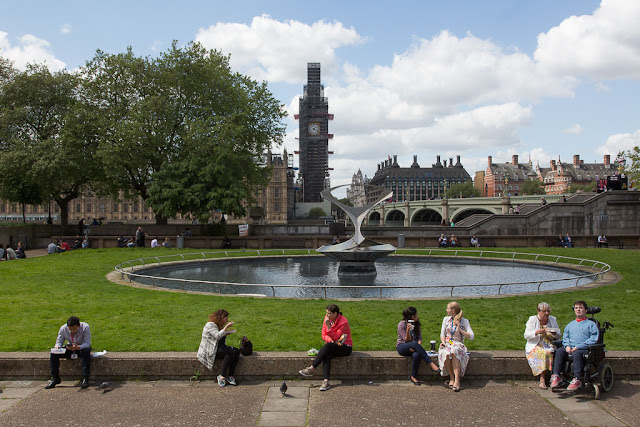 I had an errand to run at Westminster Abbey yesterday, so I took a slightly long lunch break and caught the tube down to Westminster. While I was there, I crossed the bridge (rather hurriedly) to have a picnic in the park across the river. In the photo above, you can see parliament in the background, with the Queen Elizabeth Tower holding Big Ben covered in scaffolding. (The building is undergoing an extensive renovation.) Westminster Bridge is on the right.

Here's a closeup of the tower: 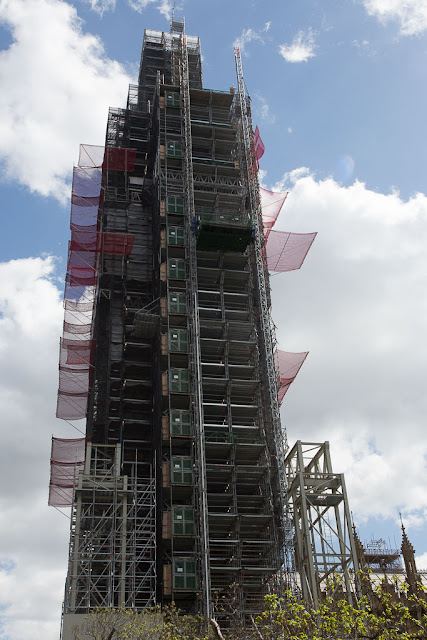 Not quite the photogenic structure everyone expects!

I had to go to the Abbey to exchange a souvenir cross that Dave's mom bought. She collects crosses but she didn't have a chance to visit the Abbey on her short stay last week, so we ordered it online and had it mailed to our house. When it got here, though, it was broken -- and not just slightly broken, but really broken, like the postman jumped up and down on the envelope. The Abbey exchanged it without question, and now Dave can take it to his mom in June, when he goes to the states for a conference. (He plans to visit his family too.) 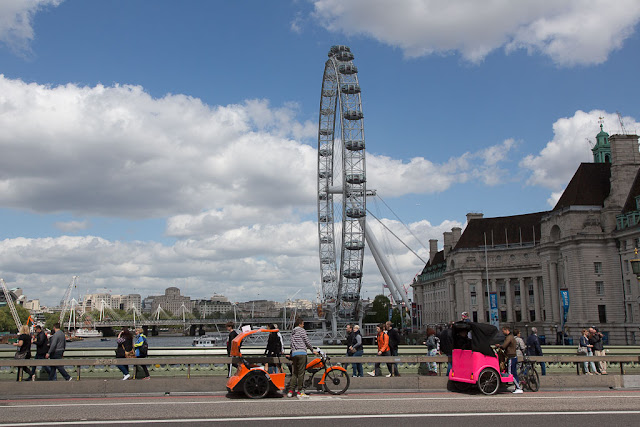 As you can see, there are now railings between the sidewalks and the roadway along Westminster Bridge. These were installed after a terrorist attacker plowed his vehicle into pedestrians on the bridge in March 2017. To be honest, it seems like a good idea to have some kind of barrier between drivers and pedestrians anyway, doesn't it?

It was nice to get out and about on a workday, rather than sitting in the school cafeteria!
Posted by Steve Reed at 6:41 AM

I saw that modern sculpture in the pond as I walked over Westminster Bridge and took several pictures of it - zooming in like a hawk...or maybe a buzzard...pigeon?

You had me at "I had an errand to run at Westminster Abbey". I have errands that I have to run today and not one of them takes me to a thousand year old cultural monument. Where did I go wrong?

Is that a ferris wheel? What am I looking at?
Dang, Steve. You really do live in London. After all these years of knowing that, it still boggles my mind.

Wow, your "out and about" journey took in some fantastic sights. I love seeing Parliament and Westminster Abbey. Now this is the kind of lunch break we all should have. Wonderful!

I love these photos! I was thinking that on one of my earliest trips to London, the famous Big Ben and tower were also covered in scaffolding. I remember being disappointed that I wouldn't get a good photo. Obviously, since then I've gotten many shots. I wonder what happened to that cross you ordered to get it that broken.

A nice change of pace, though your job at the school does sound rather collegial.

I had an errand to run today too! I got to go to the Post Office & the UPS store here in lovely the lovely Piedmont area of North Carolina. I think the oldest thing I saw was myself reflected in the glass. Ha!

Big Ben in scaffolding must be a disappointment to tourists, but it's like road work here in the summer - it has to be done sometime!

It's nice to get out of the routine sometimes. Makes the day fly by.

I'm with Vivian (above). That casual comment about running an errand to Westminster Abbey got to me too!

you were lucky , going to Westminster on a sunny day - not being swept up and over in the traffic that usually crowds that area. Great shots! Tower in bondage for what- about four years? Same as the Hunterian surgeon's museum- guess I will be back in four years, if all goes well...