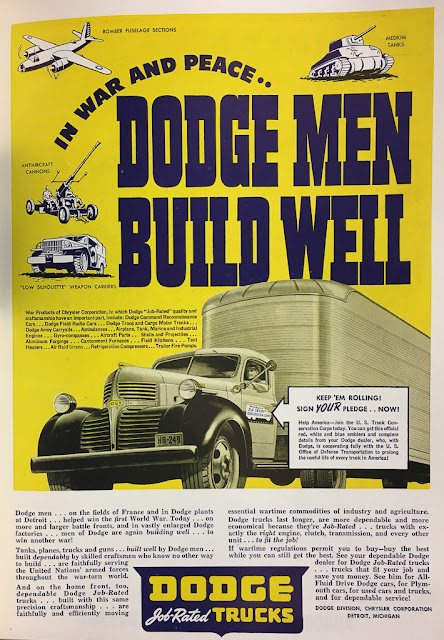 Remember how I mentioned those old Newsweek magazines we have in the school library? The ones we considered donating to an archive but instead decided to keep?

Well, I recently put them on a cart and rolled them into the main library so students could use them in a social studies project. I browsed through them to check out some of the old advertisements. Here's an assortment from October, 1942.

There are a lot of ads for wartime industrial production and materials, like these ball bearings. (I liked the dog.)

Vimm's Vitamins look like they'd pep you up! I wonder if they contained speed? What on earth is "Vitamin P-P"?

Blackie and Whitey are still "carrying on," selling Scotch which (according to the ad) had been distilled in Scotland before the war and exported  "in reasonable quantities." Whatever that means. 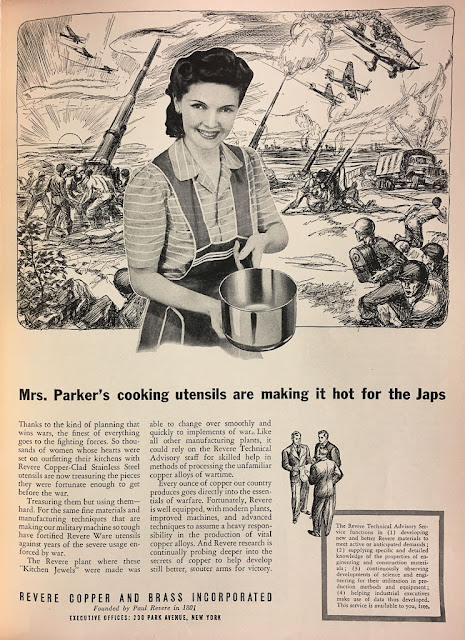 Meanwhile, Mrs. Parker is fighting "the Japs" with her Revere-Ware pots. Apparently by using them through the war effort, she's allowing Revere to convert its copper and steel production toward wartime purposes.

Here's an ad for good old Jacksonville, Florida, where my brother and mom now live. Apparently commerce authorities in Jacksonville thought it could manage three times as much war industry as it had, so they were advertising its availability to alleviate manufacturing bottlenecks. 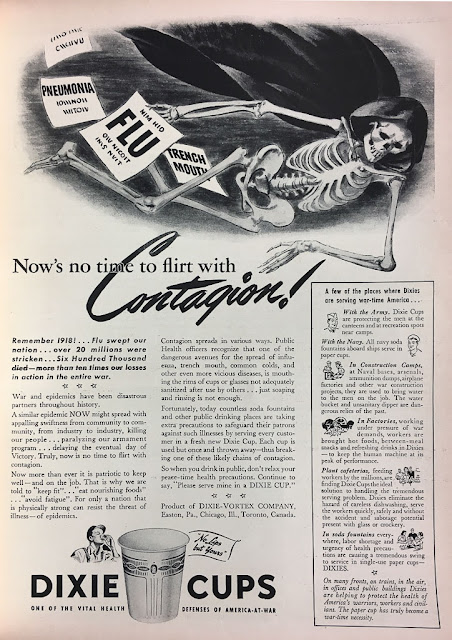 And finally, a somber advertisement for Dixie Cups, touting their sanitary advantages in battling wartime disease. This was less than three decades after the disastrous Spanish Flu epidemic of 1917. Scary!
Posted by Steve Reed at 6:33 AM

Those are so cool!

Vitamin p-p (according to Google) is what we now call niacine. It stood for pellegra-preventative (pellegra is a disease caused by lack of niacin)(Hello Captain Obvious). Also known now as Vitamin B3.

Oops, the first niacin above shouldn't have an e on the end.

Do you notice a difference in the ads then and now? Theformer appeal to a sense of personal responsibility...

These ads just depress the hell out of me. I'm not sure why. The war? Yeah. I guess. Selling products with patriotism.
Ugh. Just..."Making it hot for the Japs."
I'm now looking at my vintage Revere Ware with new eyes.

It's touching that advertisers back then assumed that people had nothing better to do than wade through a mound of text. Maybe attention spans were longer back then, maybe life was so much duller that reading several hundred words of dreck was entertainment, maybe people were naive and thought that they were getting educated about disease and vitamins and the war effort.

I like the dogs, too, but war's up with the pups on a life raft?

It is so interesting to see ads from the year my husband Roger was born. There are so many words, they really expected people to read back then. I love that. Interestingly in the flu pandemic of 1918, Roger's grandmother lost two sisters. They lived in one of the more remote places of far northern California at that time, Yreka, but the flu made it all the way there.

Vivian made a great observation about all the text in these ads. They wouldn't work in our short attention span society these days. I have vague memories of seeing ads similar to these when I was a kid. I don't remember any in particular, it's just the graphics that look familiar. Is it just me or do those vitamins seem pretty high priced for the time period?

I see the comment above about Vitamin P-P, so I know it's legit. But, my first thought was...well, that is the speed. haha

These are fun to look at, and a bit alarming with the wording and visuals. Times have certainly changed.

I think some day, if not already, these old adverts will become collectible and highly sought after. Of course, I'm currently reading "A Gentle Madness" by Nicholas Basbanes, about the people who have collected books and other written materials over the centuries.