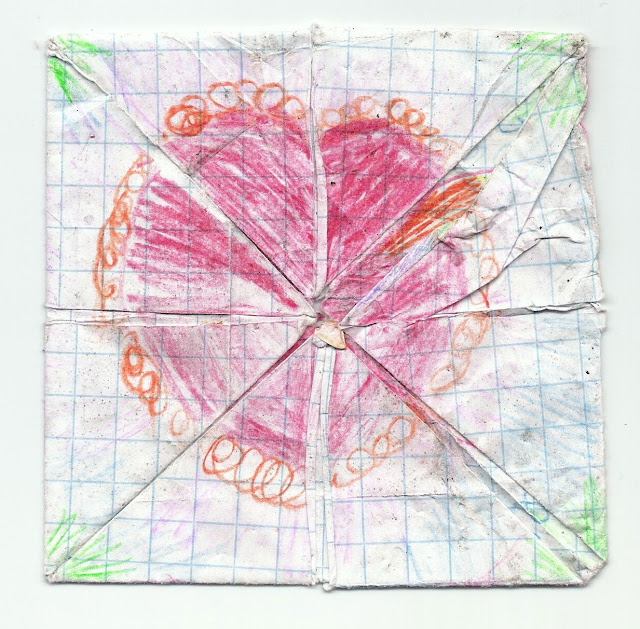 Remember, from school, how kids would fold a sheet of paper into a multi-sided device, with facets bearing numbers and words like yes, no and maybe? Then they'd stick their fingers into it and you'd ask a question and they'd shuffle their fingers back and forth a specified number of times until an answer was revealed?

Do you have any idea what I'm talking about?

I don't even know what to call it. Wikipedia refers to it rather blandly as a "paper fortune teller," though there are apparently some other more colorful nicknames. I seem to remember a version where you could label it with people's names and use it to choose your next girlfriend or boyfriend, but I may be making that up.

Anyway, I hadn't thought of these things for years -- I never see kids playing with them now. Then, the other day, I found this one on the sidewalk. It's a little different from your standard paper fortune teller -- not labeled with numbers or words, but rather with intricate designs. I'm not even sure the folding is the same, but it's close.

It opens up into this: 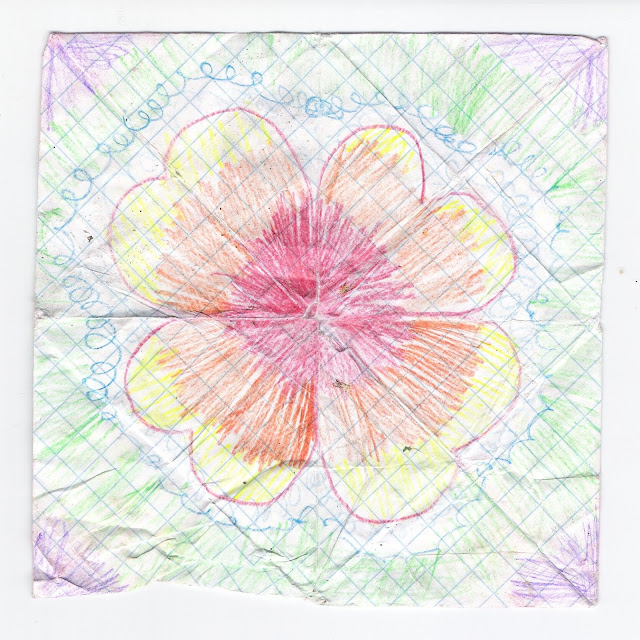 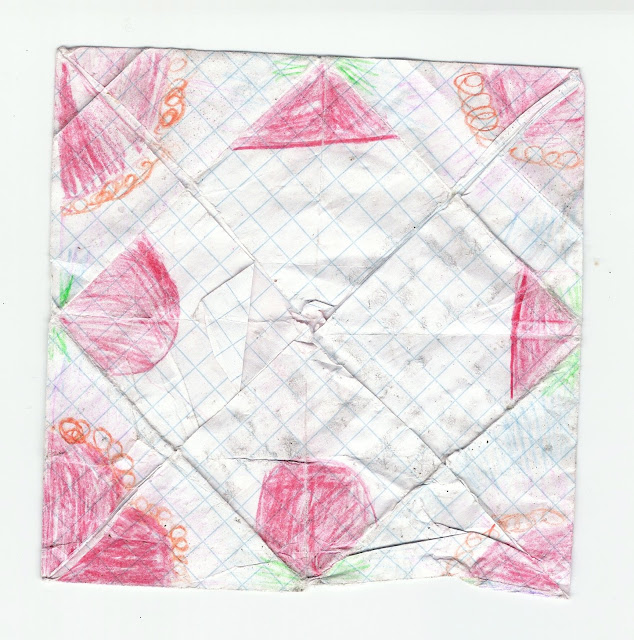 I don't really get the point of covering it with drawings, but I couldn't just throw it away, since someone had obviously put so much work into it. So here it is, immortalized in blogland, and hopefully it has brought you some childhood memories, as it did for me.

Just when things seemed to be quiet on the rodent front, we caught a sixth mouse last night. Am I supposed to leave these traps out in perpetuity? Hmmm...
Posted by Steve Reed at 6:32 AM

I hadn't thought about those paper things for years. Thanks for this nice reminder. Kids have smartphones now - they don't need that old innocent stuff of bygone years. Do boys still play marbles in playgrounds? Do little girls skip to skipping rhymes?

It's hard to tell for sure, but this looks an awful lot like an origami box. If you blow air into the hole in the center of the second photo iteration, it will expand the box. It's the only origami I ever learned :) (Might want to use a straw if you try this)

Those other paper things you referred to are called cootie catchers or fortune tellers and are also origami.

Jenny -- it's definitely not a box. I should have shown a 3-D version -- these are all scans from my computer so the folds have been flattened. But I can put my fingers into it (although it's small for my hands!) just like I used to with the fortune tellers.

jenny_o must be from the eastern United States -- we called them cootie catchers in Pennsylvania when I was a kid in elementary school. That was in the mid-1960s, and by then boys had definitely stopped playing with marbles and girls were crazy for what we called Chinese jump ropes, which don't look like regular jump ropes at all.

We called them cootie catchers in Sebastian, Florida, too. You would go through a series of picking numbers to find your true love's name. I could still make one, I bet. I'm rather charmed that you found this one.

I do remember these papers from my childhood and I am 73. How interesting that you found one now in the technology age.
On another subject I am catching up with your posts this morning and was reading the one about your latest LOOP walk (all very interesting) when i saw the Lion sculpture by Don Potter. Mr. Potter was my husband's sculpture teacher at the Bryanston School in Blandford in the late 50's, early 60's. He was a lovely man who worked for many decades and lived until he was 102. Thank you so much for sharing this photo. I will show it to my husband when he comes home from work.

Sorry, the sculpture was the leopard gate. A beautiful cat.

i have them but leave the traps outside...so they get caught out there...NOT IN MY HOUSE!! they carry so many germs...yuck!

I used to make those fold-up fortune-telling things all the time. I'm pretty sure I've seen my grandkids make them too. They don't watch TV or have smartphones. But they do love to make things by hand.

That must be a childhood activity that I didn't experience. I have no memory of it at all. I'm not sure what to tell you about the mouse. The word of imminent danger has not gotten out yet.

I definitely remember those from my childhood in the 80's.

I warned you that your love of all creatures great and small would result in this invasion of your manse.

I remember those things, but I was an introverted antisocial child & never participated. Ha! I should make one now to use to decide who empties the dishwasher or folds the towels.

I remember making these and it was a lot of fun. It wasn't about telling the future but making an attractive design.

I used to make those, too.

I hadn't thought of those Fortune Teller Origami for years, they were silly fun as a Child, I think we'd put the names of who might be your future Love interest and a number to indicate how many kids you'd have... I think there might have been a 3rd fortune but I don't recall what it was. I always felt badly having to put mouse traps down, but you just have to, they can be so destructive and here in Arizona they can carry a deadly virus.