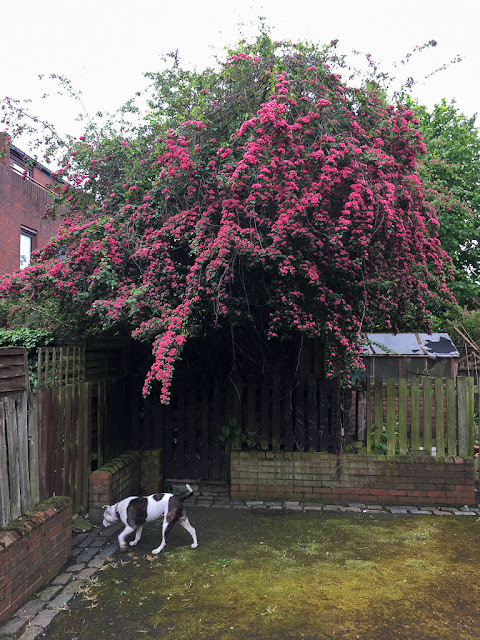 We had a lively day yesterday. Olga's leg seems better, for one thing, and we took a walk in the morning that didn't seem to bother her. We admired the blooming trees like the hawthorn above and the California lilac below. (Well, OK, I admired the trees while Olga tried unsuccessfully to get to a soccer ball behind that gate on the left...) On Monday we're going to resume her daily dog-walker outings and we'll see how it goes.

Then Dave and I had to go to Camden Town to visit our property manager's office and show our passports and documentation. Apparently this is required every time we renew our lease. (We made the same trip last year.) We can't send scans and we both have to go so they can see our faces and be certain the documents are ours. Brother!

So that took a chunk out of the morning, but at least it's done. We had lunch while we were in Camden and then we came home and went shopping to prepare for.... 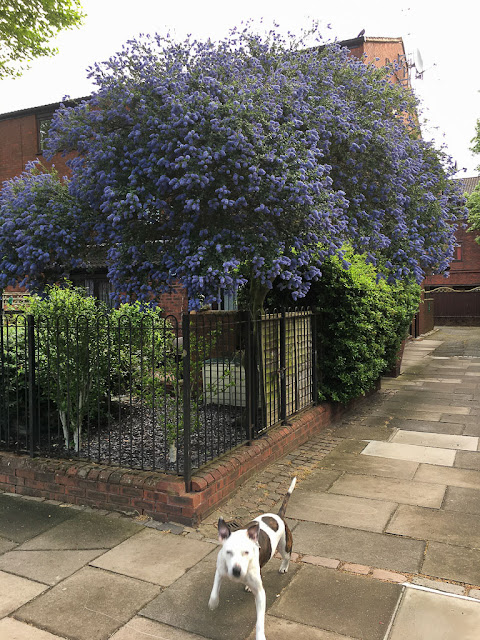 Yes, it's that time of year again, when the countries of Europe (and a few others) gather to compete against each other by singing bouncy pop music. We had some friends over and Dave made chili, and we watched the show from Lisbon. It was a bizarre year. Not only did a man storm the stage and grab the UK singer's microphone -- which happened so smoothly that I didn't even notice, but then, I'd had a martini -- but the contest was all over the place in terms of favorites. There were lots of decent performances and no obvious stinkers. I voted for Norway and Sweden, but with little conviction, and Israel was the eventual winner. Cyprus was expected to do well and indeed, they came second, but I felt like the performance was too much about their hair. (I couldn't have voted for the UK even if I wanted to -- Eurovision rules prevent viewers from voting for their own country.)

I got a wonderful present in the mail yesterday from blogger Linda Sue -- a piece of '50s barkcloth that will make a terrific tablecloth. (Linda Sue and I went to a midcentury furnishings show last fall, so she knows that's my style!) She also included a bag of Tom of Finland coffee, which gave me a good laugh. Who knew there was such a thing?! (Basically a bag of coffee with some of Tom's tamer artwork on the outside.)

I lost another pot of flower seedlings to the squirrels. They rooted through a hanging basket of cosmos and there isn't a single survivor. Sigh.
Posted by Steve Reed at 7:39 AM

Until I read this post I had admired your intellectual integrity and good taste Steve. Now I find you are into Eurovision - weighing up the dubious merits of a bunch of forgettable pop ditties. How your star has fallen!

It's nice to see Olga out and about sniffing her environment once again. Great news.

Your lovely dog is back to her old self, that's great! You get the best gifts, too.

I rather liked the lumpy girl from Australia ....

Okay. I think I knew what Eurovision is and then forgot and have been wondering because even here we catch wind of it.
I'm so glad to hear about Olga. Maybe she won't need surgery after all.

I love these two trees you've photographed and it's good to see Olga up and about.

Having to show passports for a home lease is mind boggling. I wonder if that happens here!

Good to see Olga out and about. Yay for her recuperation. I saw some headline about Eurovision and a guy grabbing a microphone. I hadn't heard of it before. Now, of course I'm going to have to google around to figure out what this is all about.

Aw, none of the videos will work over here. Although I'm sure I could find some that do if I wanted to try. Love that second picture of Olga!

Eurovision , always loved it hated it groaned about it and delighted in it, This year no exception! Loved the winner and her crazy song! So good to see Olga moving around! Wonder how she hurt her leg? Glad the parcel arrived -in good time too!

So glad that Olga's leg is on the mend. And your pictures, as always, are fantastic!

Thrilled Olga is back to herself. London sure is blooming right now! Eurovision, eh?