Every Store Has a Story 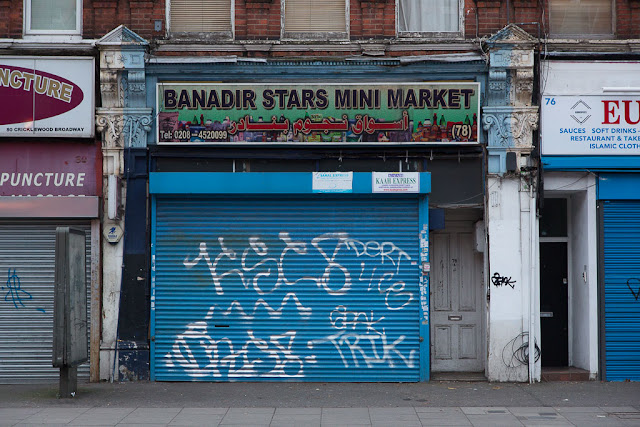 You will have noticed from this blog that I often photograph shopfronts. I've always found them really intriguing, whether the shops are open or closed, vacant or occupied. It's not just a London thing. I used to shoot them in the states, too.

I like the graphics on the signs, and the way shops embody the characteristics of the surrounding neighborhoods. They don't have to be fancy -- in fact it's better if they're not. The shops I like most don't try to be fashionable showpieces.

Having said that, I often think about some of the shops and businesses I used to patronize as a kid. I wish I'd had the presence of mind to photograph them.

There was the local market in Land O' Lakes, my hometown, run by an older married couple named Wells. (An independent small-town grocery is a rarity, if not an impossibility, in the United States these days.) I remember what the store looked like, with its old-fashioned checkout counter, and I remember when it closed -- around the time we got our first large local supermarket in the mid-'70s.

I wish I'd photographed other hometown businesses too, like Chuck's barber shop, or the adjacent beauty salon, or the drug store where we bought my grandmother a butterfly pin for her birthday.

There was the Sunny Market down the street from my grandmother's house in Hyattsville, Md. We called it simply the "corner store." When we visited Grandmother (and she was always Grandmother to us, never Grandma or Granny or Meemaw), my brother and I used to go there with our pocket change and stock up on sugary sodas and candy bars. I remember buying a head of lettuce there once and Grandmother wasn't thrilled with the quality -- in fact, she made me take it back. But for candy, that place rocked. 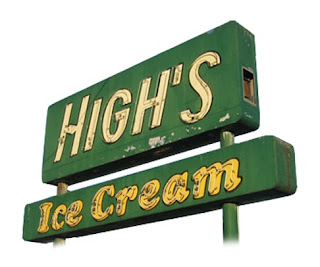 There was also a High's dairy store not too far from my grandmother's. Again, I don't have a picture, but I found this one (right) on the Interwebs. That's more or less how I remember the High's graphics.

Also in my hometown in Florida was a great old place called the Florida Bar. It was relatively nondescript and definitely just a local roadhouse watering hole. It was eventually torn down -- all except, weirdly, the front door and its surrounding door frame, which stood by itself for a few more years. It's entirely gone now, but I wish I had a picture.

Likewise the Roundtable Bar, which burned down sometime in the late '70s or early '80s.

And finally, when I lived in Winter Haven, Fla., in the late '80s, there was a motel on U.S. 17 just north of town. I don't remember the name -- but it had a groovy neon sign with a palm tree. I always meant to shoot that sign. And one day, while driving past, I saw that the sign had disappeared, replaced with something modern and plastic and far less interesting.

Nowadays, when I see something I want to shoot, I do it ASAP. Time waits for no man!

(Top photo: A shop on Cricklewood Broadway.)
Posted by Steve Reed at 6:54 AM

Land O'Lakes sounds like an Irish comedian. Next time you are there you could perhaps take pictures at the Paradise Lakes Resort which seems to be a hideaway club for nudists!

This posts brings to mind several interesting vintage neon signs from my youth abroad...and you are right, because once they're gone, they're gone. How's the latest book?

I live in a small town in Orange County, Florida, not all that far from either place you lived. You are inspiring me to take pictures of the storefronts for historical reasons. People love nostalgia. And, of course, how one presents their store front is a form of folk art when it is a Mom and Pop business, and not a big box store.

One of the things I love the most about going back to Roseland and Sebastian and even Vero Beach is that so many of the same buildings and houses are still there. It's like entering a time-warp and it's beautiful and I love it so much. I spend a great deal of time walking around and taking pictures of the places I knew as a child. If I sit on a dock to watch the sun go down over the Sebastian river, the view is almost identical to the one I saw as a child, sitting on my grandparent's dock back in the 1960's. Same gorgeous old railroad bridge, many of the same houses. I am so lucky in that I AM able to go home again.
Google Earl's Hideaway, Sebastian, for a business which is still there and which intrigued the hell out of me as a child. Hideaway? A bar, of course, very much in business.
The old fish houses on the river in Sebastian look nearly the same although there are some condo-like places thrown in now between them.
The memories!

You make me want to look for vintage (circa 1950-1960) photos of Newark, NJ where I grew up. There was a candy store on the corner in one direction and a small grocery in the other. I wish I could remember their names. Having a digital camera back then would've been so cool.

Your shop front photos have always inspired! I look at buildings now as possibilities, as art.
Your memory of the corner store, brings back memories of our own little store, penny candy, nickle cough drops, and loaf of white bread for a quarter.

YP beat me to it! I was going to suggest the Paradise Lakes Resort too.

This post brought back some memories. Growing up, there was a "corner store" in my neighborhood too. I wish I had a picture of it.

And right you are, take that picture now.

But how times have changed. Remeber when we had to have films developed, had to wait for prints? And not a chance to correct for red eyes etc.