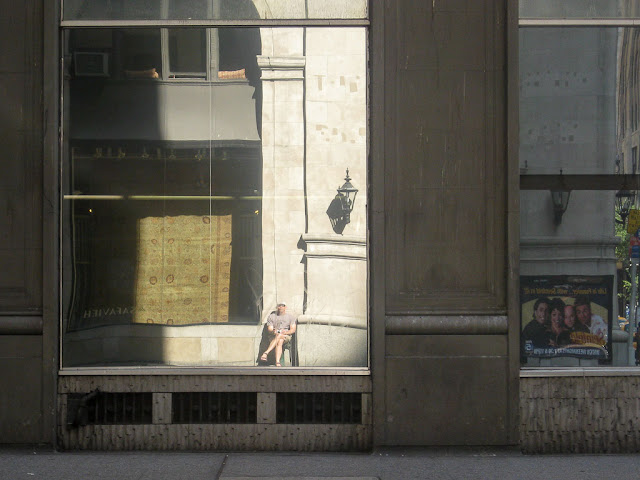 Yesterday I spent some time moving my earlier digital photos off CDs and onto a portable hard drive. CDs, after all, are old technology, and I need to put my photos somewhere I can access them even when I no longer have a disc player.

In the process, I found myself going through a lot of pictures from New York and New Jersey in the late "aughts." Here are a few that I'm pretty sure I never published before.

First, a self-portrait from September 2009, taken in a reflective window near my old apartment in Manhattan. I took several pictures in this window as I recall, but this may be the only one that also includes a Seinfeld advertisement. 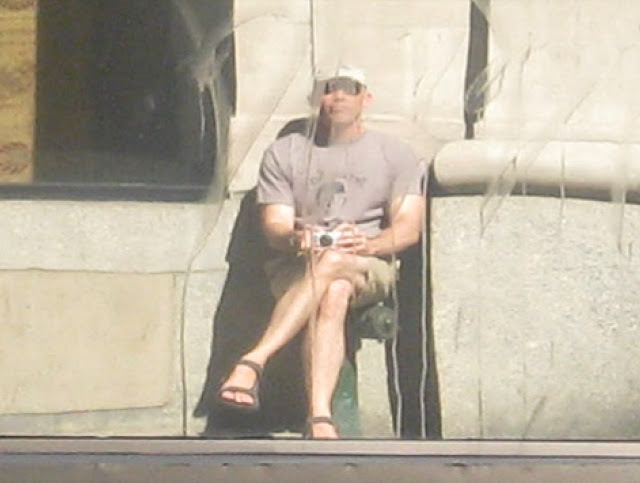 Here's a close-up. I had some biceps back then, when I went to the gym three days a week! That was my "Je t'aime Henry" t-shirt, which eventually fell apart in the wash. 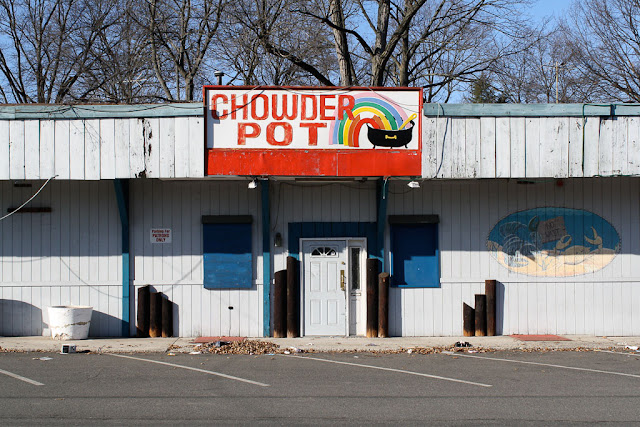 Right around New Year's Day in 2010, after I'd moved to New Jersey, I took Dave's car on a photography trip from East Brunswick toward Newark, which I wrote about at the time. I took a picture of this restaurant along the way. Doesn't that look like the saddest seafood restaurant you've ever seen? "Hey, let's stick some pilings in the sidewalk to give this characterless strip mall a nautical theme!"

I think the restaurant was out of business, even then. It definitely is now. (I looked it up on Google Maps.) 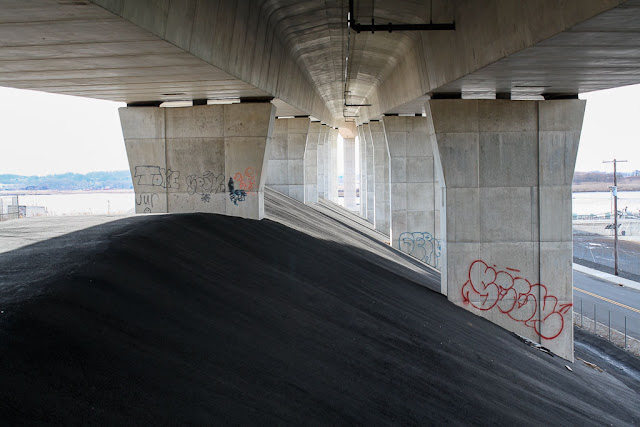 Later that same month I drove to Perth Amboy to photograph graffiti, which was my thing at the time. Apparently I wandered around beneath this bridge, on what looks like quite a slope. What the hell was I thinking?! I honestly don't remember it, but the picture doesn't lie.

In the scheme of things, these pictures weren't taken that long ago -- not even a decade. But my head spins when I think of how much has changed since then. When I took that top photo I'd only known Dave about five months, and I was still working for The New York Times Co. I hadn't yet been laid off or embarked on my second brief career with Gannett in New Jersey, and I certainly hadn't even begun to conceive of England and Olga and working in a school library. So much has changed in the last eight or nine years!
Posted by Steve Reed at 6:41 AM

Interesting pictures. Of course, it's not always just the actual images that are revelatory - it's the photographer's choices too - telling us things about him/her and how he/she sees the world.

You're right, you seem happy with the changes and that is important. I'm gladOlga and Dave are both doing well. You really did tire her out yesterday but hey, she won't have cabin fever like those of us who avoid being out in rain...

It's so hard for me to conceive of you living in NYC. But there you are. Pictures do not lie. You are right.

Things change and so do we.

I was going through old photos yesterday too and I couldn't agree more about 'change' and how quickly it happens. I'm so glad we have photos to help us remember the different stages of our lives.

I love knowing that you lived in New York and New Jersey. I grew up in Jersey and spent much time in my youth and teens visiting and hanging out NY in the late '60s. Your photos remind me of those times. It is so grand that you've been documenting your life with photos for so long. A beautiful collage of life.

I often wonder about all the writing I've done in my life and which fills a couple of file cabinets and all the photographs I have. What will become of them? I really don't have any idea.

Great shots of this and that! Inspiring. Yes, a lot can happen in eight years, life can turn on a dime.

The underpass is quite stunning
Infinity

Day-um. That's what you look like with only three days a week in the gym? Hot.