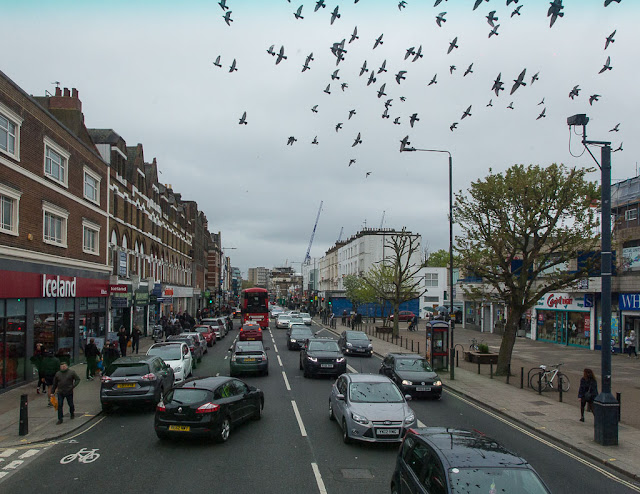 Yesterday morning when I took the dog for her walk, it was 37º F outside! It felt like January. I was really annoyed.

Inspired by Mr. Pudding's recent post featuring photos taken from the top of a bus, I thought I'd give you this photo I shot on Sunday from the top of the 328 bus on the way to Notting Hill. I was fascinated by that swooping flock of pigeons as we rode along Kilburn High Road. It was really hard to get them all in a decent shot, but this one wasn't too bad. I like their reflections in the cars below.

Have I mentioned that Dave's parents are visiting? They arrived yesterday after a transatlantic cruise. They were supposed to dock in Le Havre and go to Paris on Monday, but that portion of the trip got cancelled by high seas and bad weather around the port. Instead they came straight to Southampton and docked early, and spent a restful day on the ship. Yesterday Dave had a car pick them up and bring them to London, where they'll stay with us until Friday.

Last night we went to the Goring Hotel for dinner. It's a beautiful building, with a butter-yellow garden room off the main bar where we had drinks while overlooking the lawn -- and I got to have a martini and wear the jacket! (One of the waiters complimented me on it, and when I said it came from Ted Baker, he said, "Ah yes, he does subtle flamboyance very well." Which I thought was an interesting way to describe it. Better than our friend Chris, who likened it to something worn by Liberace -- although I suppose that's not far off, either.) Anyway, for dinner I had the legendary Eggs Drumkilbo, a quail's egg nested on crabmeat (my minimalist description of a more complex dish), halibut with other seafood for the main course, and British cheeses for dessert.

And now, back to routine -- time to walk the dog! According to Weather.com, it's a balmy 49º F this morning -- downright tropical compared to yesterday.
Posted by Steve Reed at 6:16 AM

So pleased that my bus photos inspired you Steve. You get a different perspective from the top deck of a bus. It is a shame that Dave's parents have arrived in such disappointing spring weather. Next week is meant to be a whole lot better.

The bus photo is just brilliant. The jacket...I'll have that lovely fabric when you've finished with it. lol
Briony
x

That's a wonderful photo. Glad you got to wear the jacket. I hope the in-laws have a nice visit despite the weather.

IS THERE A PICTURE OF YOU IN THE JACKET? I want to see the full effect.
That dinner sounds as subtly flamboyant as the jacket. And so grown-up! By the way, "subtle flamboyance" is my new favorite description.
Hope the visit goes smoothly and well.

Really nice photo from the bus. Enjoy the visit with Dave's parents. Hope the weather warms up, and everyone has a lovely time together.

37 F ain't bad! It's all relative. But then again you have to wear that jacket and it must be warm for the jacket!

yay, you wore the jacket! now please, a photo of you in it!

What a coincident, just yesterday afternoon I was reading an article about royal weddings and I saw photos of the suite Kate Middleton and her family stayed in at the Goring Hotel before her wedding. I bet you were there dining while I was reading that article. I had to Google that egg and crab dish to see what it looked like. Very nice! I love that description of "subtle flamboyance". I will have to remember that one. That venue sounds like the perfect one for wearing that jacket.
I love your photo today. I will remember that riding the top of the bus is a great place for snapping photos.
Your weather sounds awful. 37 degrees would be bone chilling to my desert climatized body.

Liberace? No, not unless it's jewel-encrusted! :) Subtle flamboyance is a much better description.

I love the pigeon picture and, as you pointed out, their reflections below. I've never been on a double decker bus but would enjoy the view.

Have an enjoyable visit with the in-laws!

I agree with jenny_o. Liberace never wore anything subtle.

I love the birds! They frame the photo.....
You really DO have a good eye for a photo

Love the bird photo so much!! Glad the in-laws have arrived and all is jolly in your world! I SO love your snazzy jacket! It is perfect! Keep you eye out for a small parcel in probably ten days or so.

How very British to have cheese for dessert. I myself would have requested the more American version of dessert - sugar coated sugar with a side of sugar. Ha! I love that you got to wear the jacket so soon!