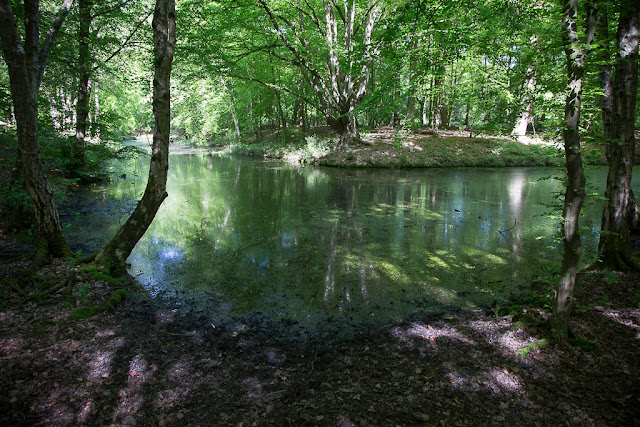 I walked another segment of the LOOP yesterday, the 9.5 miles from Cockfosters to the Enfield Lock train station. The first part of the walk took me through Trent Country Park, which I'd visited a few times before. But I'd never seen some of the park's features, like Camlet Moat (above), a medieval moated island where people once lived. Excavations at the site have uncovered stone foundations, shoes and daggers and oak bridge timbers dating back to the mid-1300s. 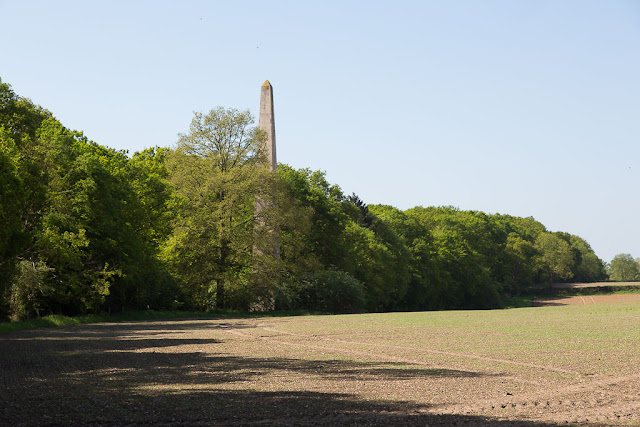 I also passed the 20-meter-tall obelisk erected in the early 1700s. 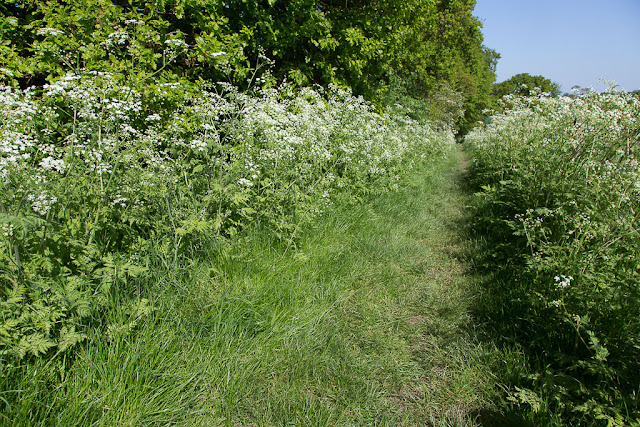 And suddenly, just weeks after our cold, wet spring and our snowfalls, we're practically in summer mode! The path was bordered by masses of Queen Anne's lace and there were insects everywhere -- craneflies, bees, cabbage whites, flies and other buzzy things. 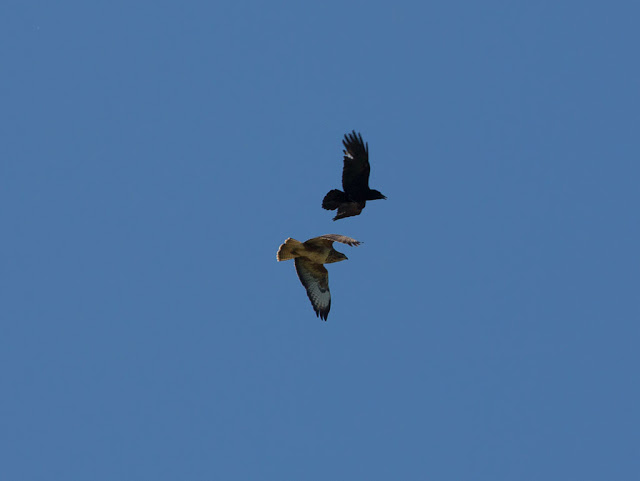 I watched this brave crow harass a hawk in mid-flight -- defending a nest, no doubt. 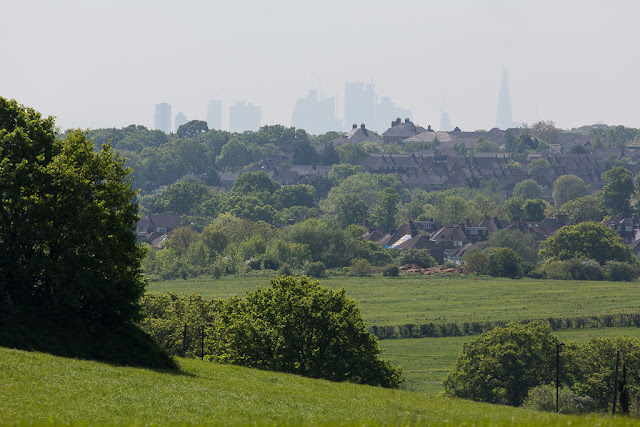 I was way, way north of the city. This is what the skyline looked like. 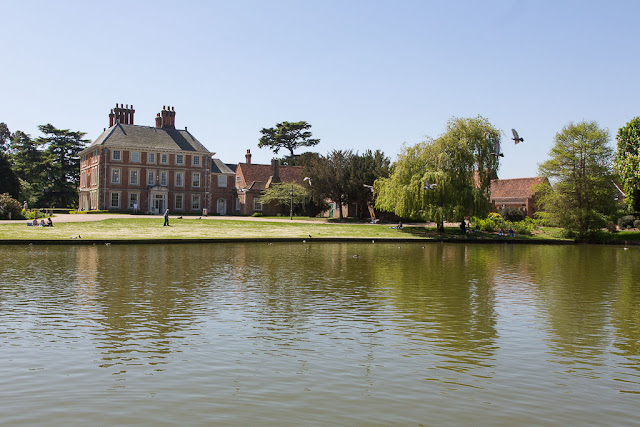 The path continued along Turkey Brook to Forty Hall Park. I took a little side trip to visit Forty Hall, built between 1629-1632 for Nicholas Rainton, a textile importer. Then it was back to Turkey Brook -- which, incidentally, apparently isn't named for the bird but instead is a corruption of some local resident's family name. 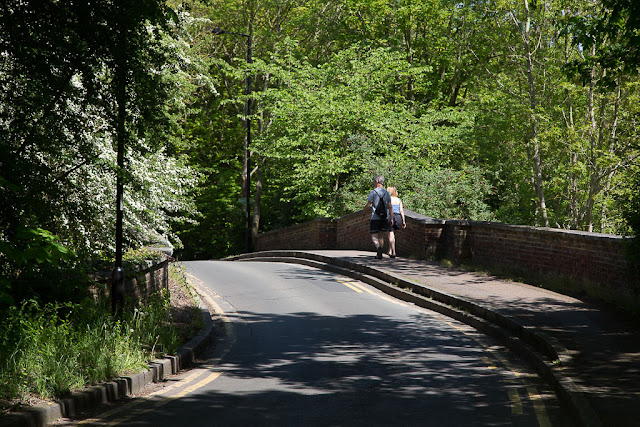 The path passed a small bridge, and according to "local legend" relayed via my trusty LOOP map, this was the spot where Sir Walter Raleigh gallantly spread his cloak on the muddy ground for Queen Elizabeth I to step across a puddle. Fortunately, it was a dry day, so no such dramatics were required for me to pass. (I'd have had to spread my own cloak!) 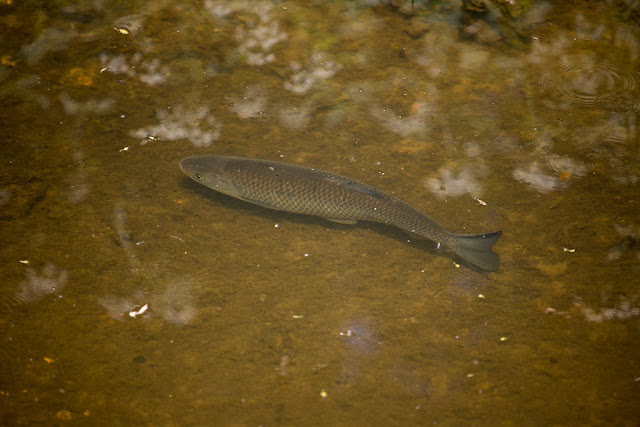 There are good-sized fish in the brook -- I believe they're dace? Also lots of little minnows, no doubt the daces' dinner. 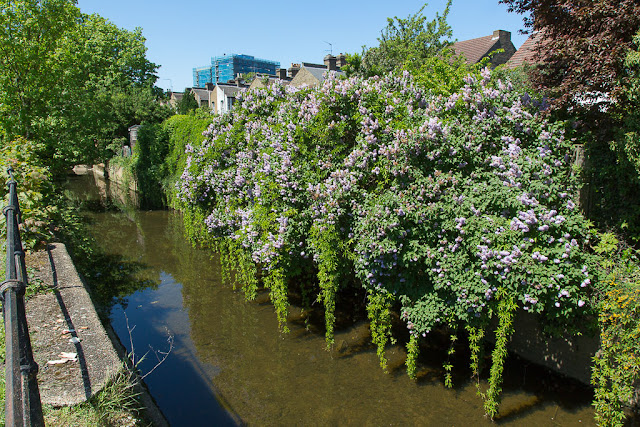 By this time I was feeling a twinge of sunburn, and I was happy that the train station was right around the corner!
Posted by Steve Reed at 6:44 AM

I hate finding evidence of pollution...great photos and lots of wonderful historical tidbits.

Thanks Steve for taking me on that lovely walk. Who would think that there were such beautiful places so close to London.
Briony
x

Perhaps you should contact Doctor Jacaza Steve - he could rid your garden of slugs and heal Olga's leg immediately. Dave might also consider consulting with him re. digestion etc..

Yesterday's Loop section seemed one of the best yet and all the better for being undertaken in lovely weather.

As much as I would love to call Doctor Jacaza, I'm sure I can't afford him, and thus I have deleted that blog spam!

I agree with Mr. Pudding. This does seem to be the loveliest part of the Loop so far. How long did it take you to walk it? If it were me, I would budget 6 hours, and probably at the three-hour mark I'd start in on the existential angst, if that's the right way to describe the feeling that this walk will never end and I'll be treading the same path for eternity.

Lots of history on this section of the loop. That "hall" looks beautiful Those lilac bushes have to be the biggest I've ever seen. I would love to have to smell their wonderful scent.

There's much hidden history that you findaand it makes for a very interesting walk.

Such a lovely walk. Really loved the views on this one.

Some lovely scenery. Your comment on the current state of pollution, though, makes me sad.

Thanks for taking us on your explorations! Such great views! Beautifully photographed, of course!

That's just beautiful! I had to laugh at myself though, I read " trusty LOOP" as Lusty Troop. Ha!