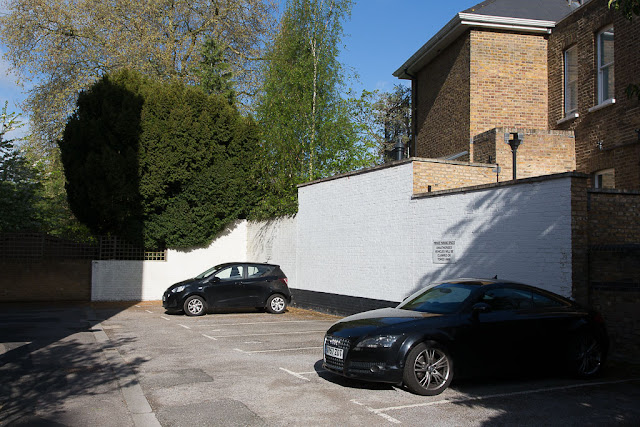 There are two "bank holiday" 3-day weekends in May, and this is the first. So Dave and I are off Monday and we're looking forward to some springtime recreation.

Sadly, Olga will not be joining us, because she has injured her leg. Yesterday when I tried to take her for her morning walk, she firmly planted her feet and refused to go. I coaxed her out onto the street just long enough to do her business, but then she turned for home. This is very strange behavior for a dog that loves to walk as much as Olga.

Then, when the dog-walker came around 1 p.m., I watched on our live web cam as he pulled her off the couch. Again, she couldn't walk -- in fact, her back leg slipped out from beneath her -- and the walker left her behind. That's when I knew we really had a problem.

So I conferred with Dave and he took her to the vet in the afternoon, and the consensus is that Olga has injured her anterior cruciate ligament, which connects the knee joint, in one of her back legs. Apparently it's a common injury in dogs like her. She's on pain meds and 10 days of rest. So, no long walks.

She's going to hate this.

Meanwhile, since Dave was taking care of the dog, I kept my plans to visit the brutalist Lillie Langtry pub with some of my coworkers. None of us had ever been there and we were curious, so I organized an outing that eventually grew to about seven people. It's very much a no-frills local pub, with a pool table, basic beers like Foster's, Stella and Carling, and pithy quotations from the likes of Winston Churchill and Oscar Wilde written on the walls in chalk. (Nothing from Lillie Langtry, though, at least that I could see!) Someone had a cute brindle staffy puppy named Gucci that attracted a lot of attention -- probably the only Gucci that's ever been inside the Lillie Langtry!

(Photo: A shadowy parking lot near the Lillie Langtry, about ten days ago.)
Posted by Steve Reed at 7:27 AM

So now you have been inside Lillie Langtry...exclamation mark!
I am so sorry to learn that Olga has an injury. I hope that the rest and medication works and that before too long she will be dragging you over Hampstead Heath once again.

This is uncanny. Princess, one of the cats has broken a bone in her foot, she's in a cast, bonkety bonking about the kitchen. Must be something in the stars.
I'm sure Olga hates not going for her walks as much a Prin hates dragging this big mauve thing about, let's hope they both get well soon it's upsetting for them and us.
Briony
x

Poor Olga!
Could you please post some pictures of the inside of some pubs at some point? I am so curious.

Hope Olga heals well and quickly. Down time is no fun for a rambunctious doggie.

Oh my, sorry to hear about Olga's injury. I hope she's up and around in good order. She doesn't seem like a dog to be kept down.

Poor Olga! I know how she feels.

Prescott, Arizona has a bar named the Jersey Lilly (http://www.jerseylillysaloon.com/) named for Ms. Langtry. Apparently it is more posh than the pub in London.

Poor girl! She will need extra treats and love until she feels better.

Oh, no - it's hard to enforce rest with a pet. I hope all heals quickly.

Good luck to all of you with Olga's injury! I would like to have a bank holiday... Alas, my company doesn't even take Memorial Day off. No break for us until the 4th of July - but we get the whole week off then.

I'm sorry to hear about Olga's leg and hope she mends quickly!