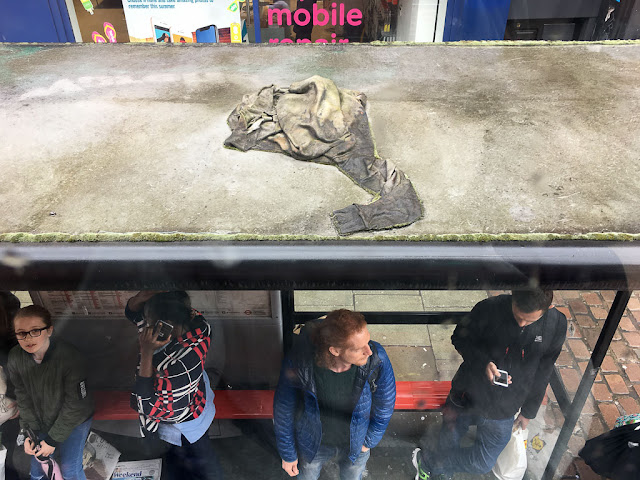 When I got up to walk the dog yesterday morning, it was 43º F! Which is cold for this time of year. I think it may be slightly warmer today.

So where do you stand on the great Laurel/Yanny controversy? I finally had a chance to listen to the clip yesterday, and I fall squarely into the Laurel camp. In fact, I am so firmly on Team Laurel that I didn't understand how anyone could hear Yanny -- until I played around with the slider the New York Times developed to detect people's tipping point between the two. When the slider is about two notches from the far right side, I begin to hear Yanny. Dave is Team Laurel too.

Jennifer of Sparrow Tree Journal wrote a post the other day in which she discussed being unreasonably cranky. I confess I've been feeling cranky too. I told her -- and I firmly believe -- it's got to do with the end of the school year. There's just a lot to do at this time of year, and those of us who work in education are all pouring on the fuel and we're tired.

I've been feeling guilty about it, but then I watched the video clips of Rage Lawyer. Have you seen this guy -- the Manhattan attorney who launched into a tirade against restaurant workers for daring to speak Spanish? Who threatened to have them all deported? Who berates total strangers for walking on the wrong side of the sidewalk and who, not surprisingly, has appeared on video yelling and insulting people at several pro-Trump events?

He is a real gem, let me tell you. In terms of crankiness, I couldn't hold a candle to him.

I read that article and watched the associated videos yesterday, and my first thought was, "Who raised this guy?" Not to blame his behavior on anyone else, but I seriously wonder what kind of environment could produce someone so unabashedly confrontational. And paradoxically, he apparently studied abroad and speaks fluent Spanish himself! Does he not see the contradictions? Is he mentally ill?

Unfortunately, our current political climate is partly to blame. This is the kind of misdirected rage that Trump's America (and Brexit's Britain) encourages people to release. They feel justified and entitled to their malignant racism and xenophobia.

I feel more respect for the woman who relieved herself on the floor of a Tim Horton's restaurant and then threw it at the employees. At least she apparently just wanted to use the bathroom.

(Photo: Dave and I laughed at this weathered old sweater languishing atop a bus shelter in Camden. I meant to include this picture in yesterday's iPhone gallery but I forgot!)
Posted by Steve Reed at 6:56 AM

I'm on the opposite end of the spectrum in the Laurel/Yanny business. I can't hear Laurel until I get almost to the extreme left with the slider. Interestingly, as I slide it to the right again, I don't start hearing Yanny again until almost the middle. It's as if my ear wants to continue to hear the new interpretation after having finally discerned it. It's a weird phenomenon, that's for sure.

I read that the woman in the Tim Horton's had a history with the store, and that management had denied her access to the washroom based on her previous misuse of it. For what that's worth :)

Anger management, yes . . . there are many who could use a good dose. And studies have shown that the old advice about hitting a pillow or venting is less effective than redirecting one's focus. I suspect it has something to do with adrenaline, but I'm not a scientist or a doctor, so that's a guess only :D

And did you see that a woman in Publix in Tallahassee pulled a gun on another woman in the parking lot after a check-out altercation?
WTF, people?
I actually enjoy letting people go ahead of me in line at Publix if I have a lot of groceries and they've only a few. Or if they have children in the cart. I'm not in that big of a hurry, usually.
And honestly, for every one of these rage incidents, there are so many incidents where people are kind to each other. They don't get the attention, of course. This is just the way we should all act. And so often do.
But that lawyer- he's a piece of work for sure.

I totally hear Yanny and was convinced there were two tapes until my husband and listened at the same time and he heard Laurel and I heard Yanny. I could NOT imagine how he could hear Laurel! But on your slider, three from the left, I hear it! I am very curious about what it says about how humans interpret sound. Fascinating!

As for that rage lawyer, I do believe anyone who behaves like that is mentally ill, but now mental illness has been encouraged all all these hateful new avenues. People no longer see the need to practice self-restraint. There is goodness in the world too of course, but Trump has definitely coarsened the level of pubic discourse.

That Yanny-Laurel debate made me think about how I could not for the life of me understand how someone could support Trump. And yet people do. And passionately. Society needs another slider! Then again, maybe not.

I must be totally out of it because I hadn't heard any of this Yanny vs. Laurel controversy. After checking your link, I still don't quite get why it's such a big deal. Obviously, I'm missing a piece of information.
I did hear about the crazy lawyer. There is certainly a lot of anger out there and sometimes I wonder if it's because it's so hard to tell fact from fiction these days.

Teachers are burned out at the end of the year. Even cool laid back guys like me would get cranky.

So, I clicked the first link I saw about Yanny/Laurel a few days and a page came up that said I had to accept the terms of Twitter blah blah blah. So, I decided to find it on Youtube instead. There were a lot of Yanny/Laurel links there. I picked one that looked innocuous and didn't say it was posted by Vladimir Putin (I'm not kidding). The one I chose turned out to be a short audio of a woman having an orgasm and then some vague words at end. It wasn't Yanny or Laurel. That was my one and only Yanny/Laurel experience. I love the multi-layered composition of the bus shelter photo.

I didn't hear Yanny or Laurel - I hear Yee-a-whee. I haven't tried the slider yet though - I'll have to check it out.

I definitely heard Yanni until I tried this slider. Amazing. BTW, the White House has finally produced something truly funny as they released a video in which various people gave their view on what they heard. The kicker is Trump himself at the end. You'll have to see it.