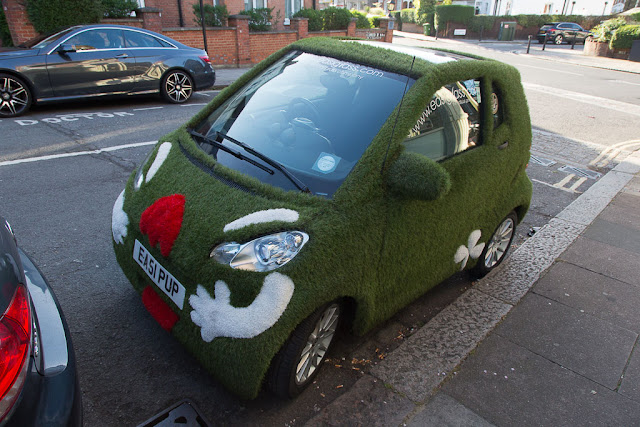 It's Friday, and I have nothing very illuminating to say because I've been stewing about Trump and North Korea and the state of the world in general.

Maybe I'll make that the subject of a later post. But I try to be more or less positive here at S&L, so let's just look at some random photos, shall we?

Yes, that is a grass-covered car. Or artificial grass, at least. It's for a company called Easigrass, which can replace your lawn with low-maintenance fake turf. If you want. Which I don't. 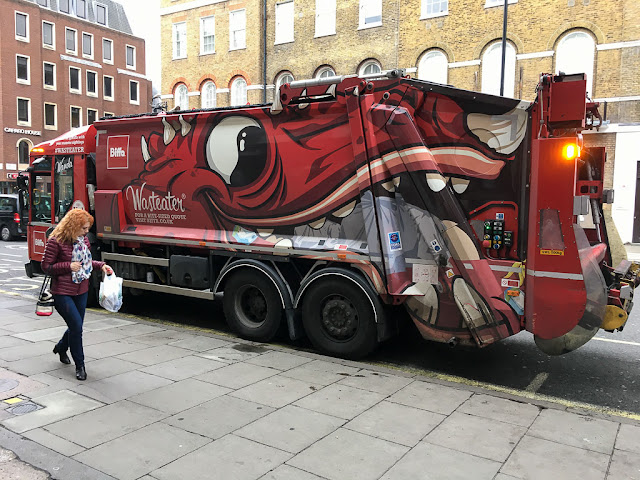 I came across this brightly painted "Wasteater" garbage truck in Marylebone several weeks ago. Definitely an attention-grabber. If only some creature really did eat all our waste, and not to its detriment. 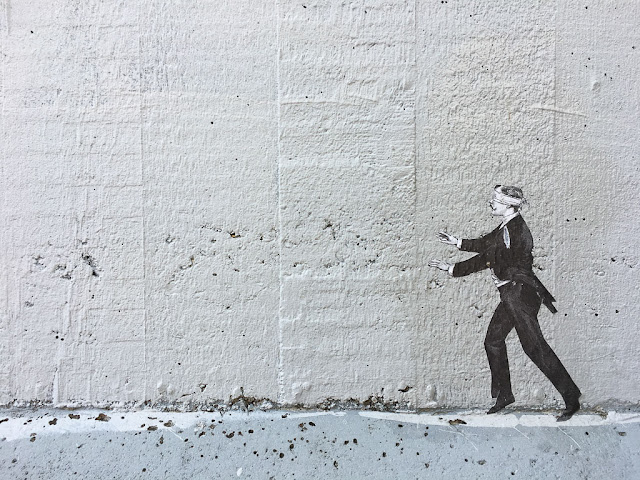 Some street art from St. John's Wood. I walked home from work on the route I usually walk to work, and I saw this on a wall that I normally don't see because I'm always coming at it from the other side. Does that make sense? In other words, walking in a new direction made a difference!

Is that Charles Blondin? 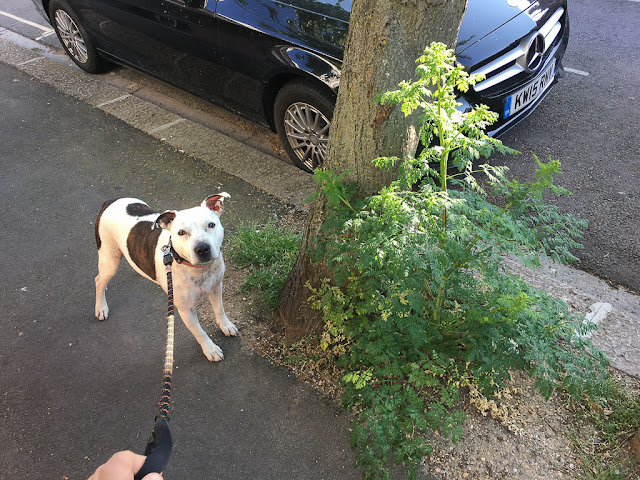 There are some gargantuan weeds growing at the base of trees on our street. This one is cow parsley, I think, and will eventually have a big Queen Anne's Lace-like bloom. There's also a big thistle, and this.... 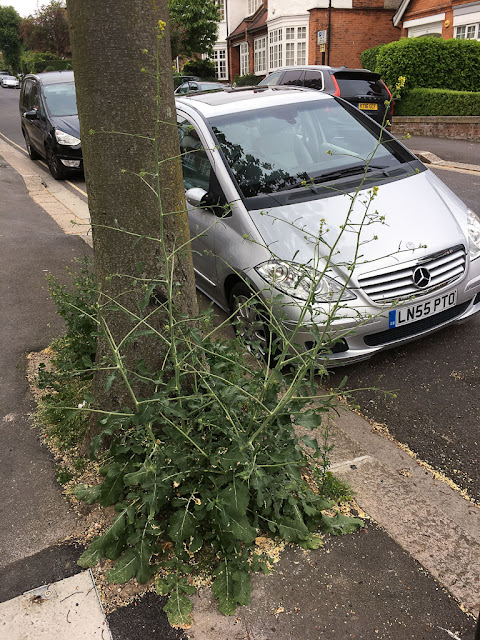 ...which to me looks something like wild cabbage or broccoli. 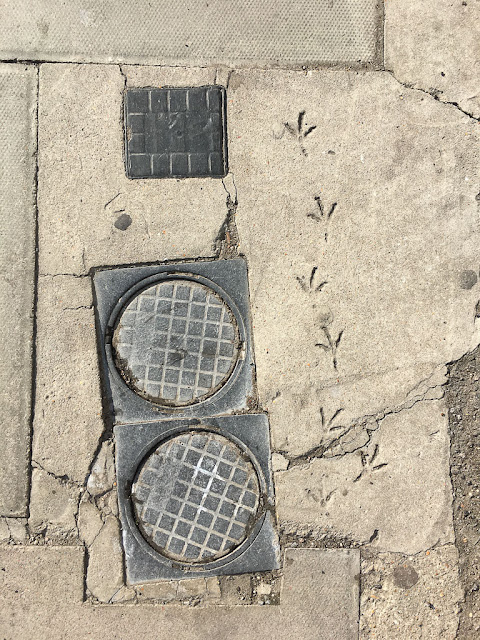 This pigeon left its mark in history. Dave and I were watching pigeons on our bird bath last night and saying they're actually kind of pretty birds...if only there weren't so many of them. 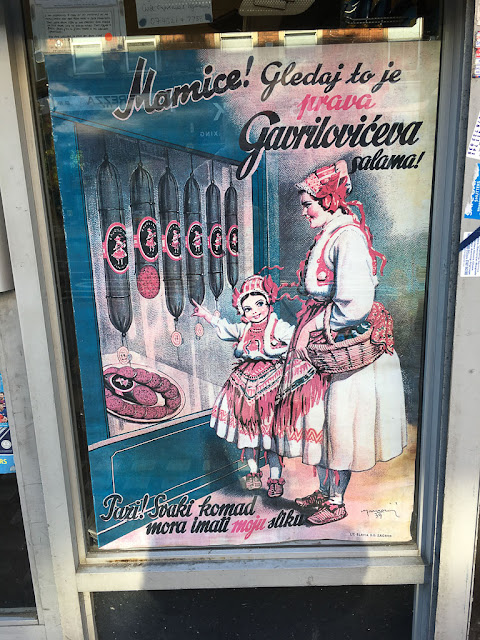 This poster hangs in the window of a shop on the high street. Does anybody know what language that is? I'd guess Polish, but that's only a guess. Maybe they sell Polish sausages? 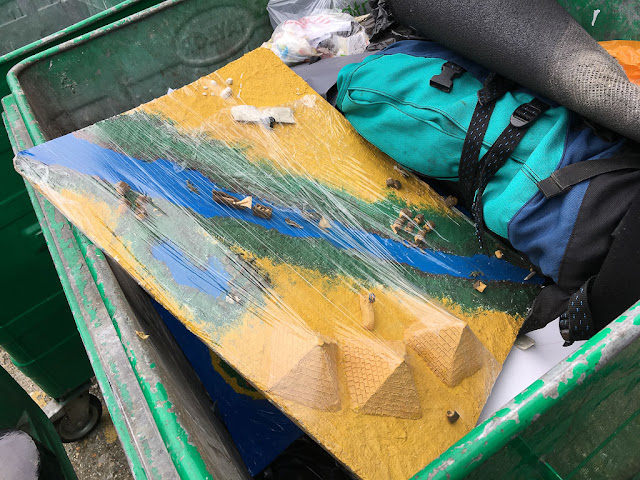 And finally, someone's school project on ancient Egypt has gone out with the trash. I guess things like this can't really be saved forever, can they? There was also a volcano project, underneath this one.

I hope this person got a good grade, because there's a lot of detail there -- the pyramids and the huts and the boats on the river. 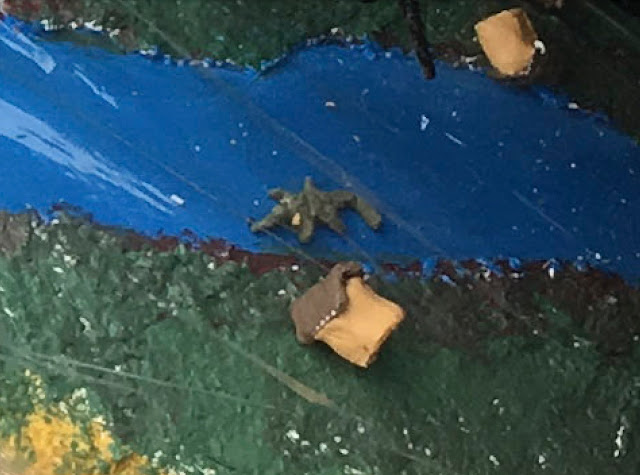 There's even a little crocodile!
Posted by Steve Reed at 6:47 AM

Being a gifted linguist of international repute, may I advise you that the text on the poster is in fact Croatian? By the way, for a moment I hesitated over "S&L" - what could it mean? Sadism and Lubrication perhaps? Then I realised it was "Shadows and Light" which means pretty much the same thing.

I wonder how old the maker of those pyramids is. Did he or she grow up and move away and Mama finally said, "Okay. Long enough."?
That little grass covered car looks like it is wearing a tea cozy.
Nice pictures!

For some reason that grass covered car gave me the willies. That pyramid school project is fabulous. It brought back memories of doing such school projects with my own kids. I guarantee you that one had parental help. You can always tell.

I've been stewing about Trump and the state of the world in general as well. You have found a wonderful balance to all of that with these great photographic diversions. We still have bleak dreary weather, so here the stewing continues.

I never could understand the appeal of fake grass. yes, it's always green (until it fades) and doesn't have to be mowed but you're walking on plastic! Nice group of pictures. I like the blindfolded man groping his way. I took some pictures of street art in Lisbon with you in mind.

My husband is from Macedonia, he says it looks like Serbian to him but it could be Croatian as well. He says it translates to something like, “Mom! Look that is a real Gavril's salami! Caution! Every piece has to have my own image.” He says he doesn't like to use the word, 'caution,' but there are words that are hard to translate directly into English and that is as close as he can come this morning while still working on his first cup of coffee. The little girl's picture is on each sausage.

FWIW, when Donald, (Vladimir) Trump was elected president I was so upset that I had to have a tranquilizer that night to sleep. It kept me very upset for a couple of days until I was shopping in a small, local grocery store that I like. I was in a big rush and headed for the milk cooler which is in the very back of the store. I randomly picked an isle to get back there and it happened to have cards and on the end a religious book display. As I walked past all of that a book title caught my eye, I call that a site augury. The title was, “God is bigger than the Bogeyman.”

Indeed. I have not worried about what they individual has done since then. Somehow, in the great scheme of things, those who advocate for that kind of base existence have to have their day. And as surprising as it may be, even here in the land of liberals, there are those that are thrilled he is president. Go figure.

But in the end, I believe that, “The Lord Of All Creation,” (Thank you Kurt Vonnegut) has our backs.

Have a great day, love your blog.

I don't want or need artificial grass, but I DO think I need that little car! So cute! I would be careful to not drive it to NYC where I might give Angela the willies...

Croatian is what I came up with too when I consulted Google Translate however, it didn't quite get that "sausage" part. I love the assortment of photos today. We have loads of that fake grass here in Arizona. It has become very popular because of a need to preserve water. That fellow on the wall does look a bit like a tightrope walker.
As for the whole North Korea debacle, it further confirms that we now have a leadership of total idiots. If John Bolton is supposed to be so smart, why on earth would he bring up the "Libyan Model"? And, then have Mike Pence follow up with the same rhetoric. The only explanation is that they wanted to stop the summit but somehow blame it on North Korea.
Silly me, I was beginning to think some good might come out of that whole diplomacy rollercoaster. For a while it looked like things were moving in the right direction. I really feel sorry for the South Koreans. We certainly left them hanging.

The number of things you find to take pictures of, Steve! Love 'em. -Kate

More plastic- fake turf, disgusting! Like fake ivy - it fades and looks even worse. Lesson, do not try to imitate mother nature with plastic, it just does not work. We are on a plastic purge here, trying not to buy any, recycling every way we can. You blog is such a yummy treat today! IT has EVERYTHING wonderful.

Yup! It's Croatian, according to Google Translate. Could that first picture be of an EcoCar?

If all people worried about Trump , maybe he would get that he's a loser.

The article below may provide some insight into why Trump is doing things the way he is, and also why we probably shouldn't expect him to change. Everybody continues to expect him to do differently and are then surprised when he doesn't. It's a waste of energy, in my opinion. I don't think he ever WILL change; he has to be endured until he is either voted out or does something so egregious he is impeached.

Enjoyed the photos! You always find the interesting things :) Love those pigeon footprints!

YP: Thank you, Google Translate! I was going to look it up myself but I figured my loyal readers would clue me in. I'm going to change the name of my blog to Sadism & Lubrication just for you. (I should get some interesting comments then!)

Ms Moon: For some reason, I suspect it's not that old. It may have even come from this school year. I think someone just brought it home and decided they didn't want it.

37P: My parents never helped with stuff like that. It used to annoy me!

Robin A: I seriously believe that we just have to keep ourselves focused on the joy. We can't deny the bleakness, but they joy is what we have to actively promote.

Ellen: I agree. I do not get fake grass AT ALL. Apparently it's quite popular here in London gardens, but I haven't seen any. Can't wait to see your street art photos!

TJ: Thanks for the poster translation! I didn't even notice that the girl was on the sausages. She must be the mascot for that particular brand. And you're right -- God IS bigger, or science, or whatever force you conceive of as universal. But that doesn't mean the bogeyman doesn't turn my stomach when I see his orange face in the paper every morning.

Bug: I think it's a Smart Car, isn't it? We have lots of them here, but that's the only grass-covered one I've seen. :)

Sharon: Oh, Lord, don't even get me started on John Bolton. That man is my idea of a total nightmare.

Kate: It's my personal challenge, to find at least one interesting thing every day!

Linda Sue: Plus, what about the insects? Plastic grass may look OK, at least at first, but nothing is able to live in it. It's completely sterile. Hideous.

Catalyst: I think they are electric cars, if that's what you mean by an EcoCar. Or is that the brand? I thought it was a Smart Car but I may be wrong.

Red: He will NEVER get that. His ego is too big.

Jenny-O: I'll have a look at that article. I don't expect him to change, not at all -- but that doesn't mean that every time he acts like himself it doesn't stab me in the heart. It's Trump's sheer unpredictability I find the most unsettling. He thrives on chaos and instabillity, but that is no way to run a government. I don't expect him to suddenly become stable but I worry about the consequences. And yes, as someone said, we really left the South Koreans hanging on this one.