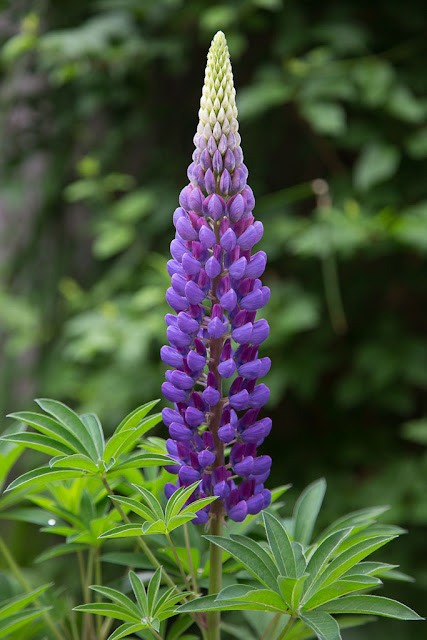 The garden is going gangbusters! The lupine sent up a tall flower spike -- the blossom must be a foot long -- and the roses are as riotous as Disney fireworks. The peonies are producing fat round buds like bright pink golf balls. It's crazy out there.

Did I tell you Dave and I pulled the plug on the wildflower garden where no wildflowers ever grew? Instead we've ordered some mature wildflower plants -- cow parsley and something called milk parsley, which grows even larger than cow parsley -- and also some comfrey. Coincidentally, Mrs. Kravitz had her gardener pulling out all her comfrey yesterday, because she said it blocked her view of her roses. Maybe the bees will now move over to ours.

Anyway, those plants haven't arrived yet, but I think they come this weekend and we'll get them in the ground. 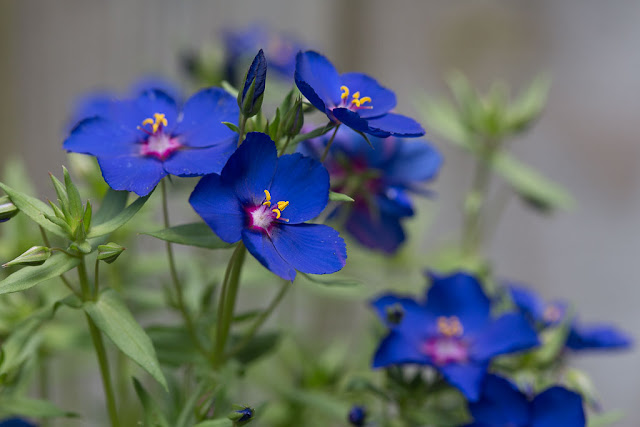 These are skylovers, a type of blue pimpernel. Remember how I salvaged them after their pot got smashed in a storm in January? Well, they've come through for another season. 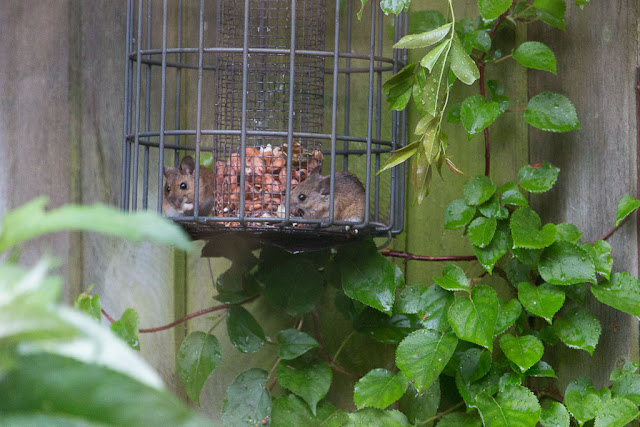 As you can see, the peanut feeder on the patio fence has continued to attract non-bird critters. I'm sure this is what set off our recent mouse infestation. I decided something had to be done, so yesterday I went to Homebase and bought a tall feeder pole. We moved the feeder off the fence so that it's free-standing and the mice can't climb up to it. (At least, I don't think so.)

The mice appeared last night for their regular meal and darted frantically around on the fence, confused about where their all-you-can-eat buffet had gone. I felt so bad for them I took them five peanuts. "Why would you do that?" Dave asked. But I couldn't let them starve completely! It was less than they'd normally eat, so I'm hoping they'll be inspired to round out their diet elsewhere -- and not in our house. I'm not going to feed them every day. I was just letting them down easy.

We haven't caught any more indoors since I blocked that opening in the closet under the neighbor's stairs. But the traps are still set, should any of them get ideas about becoming domestic mice.
Posted by Steve Reed at 6:04 AM

Are the mice inside the house the same species as the mice in the peanut feeder? They don't look like house mice to me. And aren't lupins such divine and miraculous flowers? Wikipedia says this about their history - "Consumed throughout the Mediterranean region and the Andean mountains, lupins were eaten by the early Egyptian and pre-Incan people and were known to Roman agriculturalists for their ability to improve the fertility of soils."

YP -- yes, they're the same species. I believe they're field mice, but the distinction is moot when they're inside your house!

Beautiful blue flowers, or at least what passes as blue in the plant world. As you know, peony and lupine cannot grow in Central Florida, so I am enjoying canna lilies right now. And every night, between 9:30 and 10:00 I hear the fireworks at Disney. Can't see them, though.

I've never had any luck with trying to seed wildflowers either. Perhaps if you get some started with plants, they will reseed themselves. I hope so.
Good for you for figuring out the mice problem. And you are very kindhearted, Steve. You really are.

lupines are cousins of our bluebonnets. poor little mice, got their easy eating taken away. I did the same with those damn squirrels. finally took down the bird feeders since the birds barely got any. try planting your wildflower seeds in the fall instead of the spring.

The lupines are so beautiful. You remind me that I want to plant some this year. I understand your compassion about those mice. You are very kind. I hope they move on, and express their gratitude by never coming back.

I love that you fed the mice a few peanuts to let them down easy. You've got a good heart. Your garden is lovely!

Steve! You don't feed mice! They are not pets! You WANT them to go and find their dinner elsewhere! But then you have to understand, I am completely mice phobic. I have been known to move apartments because a mouse showed up. I think I must have died in the bubonic plague in a past life, because the phobia is rather extreme.

I am looking forward to the garden updates!

But yes, as others here say, you have a kind heart.

This post made me smile! You have such a kind heart! The flowers are gorgeous and I bet the garden is looking fabulous right about now.

Lupines and skylovers - beautiful. You are so lucky to live where the rain falls.

Our lupins did not survive the last winter, strange, really, maybe they didn't like the spot or the company.
Yours are gorgeous, as were your foxgloves BTW. As are all your flower pictures, anyway!

Your mice rescue made me laugh out loud! We had mice many years ago living in a rundown Georgian terrace in Dublin and caught too many in the traps to ever believe we would get to the bottom of it. We were in the double digits. So next step, poison (the landlord's idea) which resulted in meeting up with three almost dead mice slowly crawling across the bedroom floor. One of us had the brave idea to drown them in the little pond in the back garden. The mice loved it, as the poison had severly dehydrated them. They briskly swam to the edge and ran back inside.

We got a cat the next day. Actually, we got two cats.

I have never ever used a trap or poison again, ever. I think I'll use this sonic sound wave system if I ever have to get rid of mice again.

Lupins (we spell it without the e) grow wild here en masse and are considered pests in the flower garden! It's all relative, isn't it? I do love seeing fields of them but was astonished the first time I saw an actual packet of actual seeds being sold for real money - lol

I'm so glad you have that caring heart. It's kinder to wean animals a bit, I think. No matter what critters do, inside or outside, they are just trying to survive. Unlike some human animals. Ahem.

We found mouse evidence in our kitchen - it (they?) had made a little nest in our dish cloth drawer. I don't think they could get to where our food is stored, but they got some things out of the trash (pizza bones & a bit of apple). Dr. M is on the case so hopefully we'll nip this problem in the bud quickly. Although neither of us can really bear to think about the solution very much.