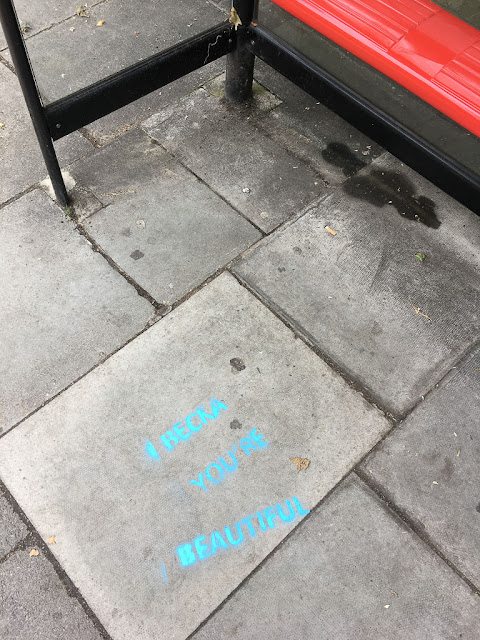 I found these on my walk to work yesterday morning. I'm not sure who Becka is, but she has an admirer -- and one who can spell and properly use a contraction. Don't let that one get away, Becka! 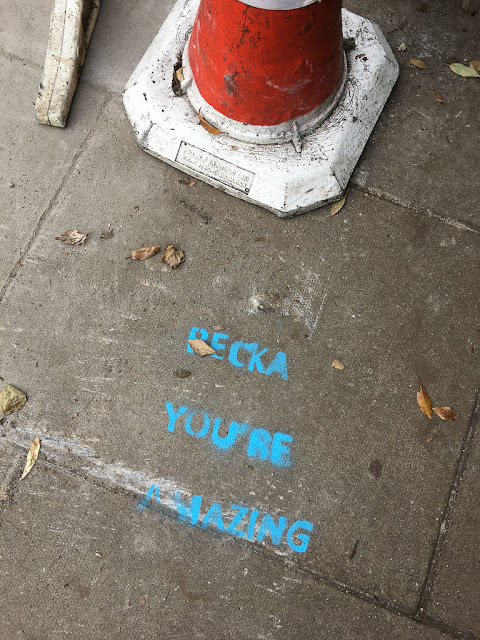 Did anyone catch this article in The New York Times about recycling? It basically confirmed my suspicion that a lot of "recycled" trash actually isn't recycled at all -- particularly now that China has stopped accepting much of our waste for processing. I think recycling is mainly a balm that makes us feel better about our vast overconsumption of resources, but has less practical value than we believe. That doesn't mean we shouldn't do it. But we should try, foremost, to consume less stuff -- less packaging, fewer plastic straws, fewer pieces of disposable cutlery.

As I told Mr. Pudding on his blog, when he lamented the overuse of plastics recently, I think a lot of plastic items should simply be made illegal. Bottled water was unheard of until the 1980s -- there's no reason we need all that waste in our landfills. Bring back water fountains! Bring back bars of soap! Sell vegetables without cling-film or plastic trays! Seriously, there's so much plastic we could eliminate and scarcely notice the consequences -- unless we're working in the beverage or soap industries.

It's weird to me that there's so little market for recycled glass. It seems like glass would be one of the easiest things to recycle. But glass waste bothers me less than other types of waste -- at least it's basically just sand, and will go back to being sand (in about a million years). It seems harmlessly inert. But I'm no expert.

As for Roseanne Barr, I'm sorry to see her show get cancelled, but mainly because it affects all the people working around her. I'm not particularly sorry for Roseanne herself. We don't get that show in England (as far as I know) and I didn't really watch the '80s version, either, but it always struck me as a fairly open-minded program. And I remember laughing at her dry one-liners on Hollywood Squares. How she got where she is, in terms of her retrograde viewpoints, I'm not sure.
Posted by Steve Reed at 6:32 AM