Letterboxes, a Rose Tag, and an Elephant These old letterboxes decorate doors on Mill Lane, not far from our flat. In fact, they're on either side of the minimalist antique store. (Which is now closed entirely, from what I can tell.) 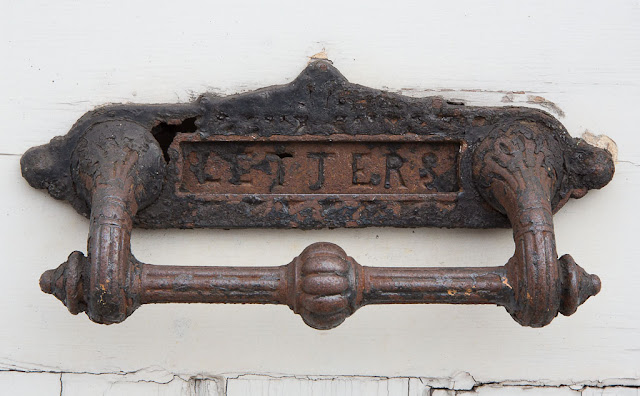 Yesterday was another sunny day spent mostly in the garden. I planted our two oriental poppies, which you may remember bloomed so beautifully last year. This year they not only didn't bloom, but were looking quite sickly in their pots, so I put them in the ground back by the wildflower bed. I don't know whether they're going to survive -- in fact, one already seems pretty much dead. But here's hoping.

Remember how I found an old rose label when I dug in that corner of the garden several weeks ago? Well, I found another one!

This one's a mystery, because we don't have anything I would characterize as a "coral pink" miniature rose. I've tried Googling pictures of it, but none of the results look familiar to me. So maybe rose Eleanor was planted but didn't survive, or maybe my concept of "coral pink" isn't accurate.

I think the tag was singed by being thrown into the fire of the brick barbecue grill that stands in that part of the garden. We never use it, but some previous tenants clearly did, because the ground is full of charcoal and other barbecuing debris.

And now, I feel like I should address an elephant in the room. (Hello, elephant.)

You may be wondering, in the midst of all the chaos and ugliness going on in the world at the moment, why I haven't been blogging more about current events. I'm reading the newspapers, at least as much as I can stand.

But honestly, I don't have the heart to rehash it here. I believe this may be the scariest time I have lived through as an adult -- even scarier than the period after 9/11, when Western resolve was more united, and scarier than the run-up to the invasion of Iraq, a travesty of monumental proportions. George W. Bush's time in office was dark, but this feels darker. We in the West are turning not only on people from other parts of the world, but also on each other.

"Rats in a cage," my father would say.

I'd rather my blog not be the place where I wallow in it every day. And I'm sure you don't want to wallow, either.

So that's why I'm talking about Olga and gardening and finding weird stuff on the sidewalk. I don't mean to be in denial. But for all of our sanity, I think it's important to try to enjoy what we can of each day that passes.

And with that, back to our regularly scheduled programming.
Posted by Steve Reed at 6:20 AM

I cam with you Steve -the less said about current events the better. I much prefer the normal programming.

I am with you

Minimalist antiques? Surely that's an oxymoron? Most antiques I've seen are pretty darned elaborate and detailed - which is part of their attraction.

World affairs? They just make cantankerous. I take time out, on a regular basis,from world affairs these days, unless it is something I feel I can do something about.

Poor Eleanor, maybe she didn't meet expectations and was turfed out.

Oh, I just clicked on the antiques link and now I see what you mean when I look at the photo....

That top letter box would look great with a clean up .... the other is way past being cleaned!
I am totally with you on not talking/writing about current affairs...I am firmly head in the sand as I can't do anything about any of it anyway!!

You say you are sure that your readers don't wish to "wallow" in current world affairs. However, you are wrong because this particular reader would like to witness occasional forays into that zone of life. You are an intelligent American who once worked for the New York Times. You have things to say that are worth absorbing. If all similar mean and women sought to turn a blind eye to it all, the bigots, Trumpers, fake patriots, racists and isolationists would have a triumphant field day.

I'm right there with you Steve. I'm so scared and stressed out by everything going on in our country. I don't talk about it on my blog because I need a place where I can get away from it all. In my "real" life I'm active in a progressive local group working hard for change in South Carolina which should make me feel better, but instead I'm feeling worn down by the constant onslaught of awful news.

"Rats in a cage" is a very apt summary.

Here's what I think- it's your blog and as such, you write what you feel comfortable writing. I feel certain that you don't have your head in the sand and that when some issue moves you to write about it, you will. It's not your responsibility to inform the world of what you think and if this is where you come for sweet calm, we will feel that too.
I love those letter boxes. I wish that we still put such creativity and craftsmenship into our everyday objects.

Before going back to regular programming remind us that this lunacy could be ended if all people vote.

I understand not wanting to write about the horrors that we are facing right now. I take pictures of pretty things and NEVER watch the news on TV. Balance the world with beauty and VOTE... scream when we have to... and VOTE. Say hello to Olga for me!

Bless you! You are a very wise man. I've been tempted many times to go on a rant on my blog but, it was never created for that purpose so I don't. I couldn't agree more, this is the scariest time I've ever lived through. Even scarier than learning to hide under my desk at school or seeing bomb shelters all over town. A few days ago, I read a lengthy article about what President Obama has been up to since he left office it gave a flame of hope. I just hope he and others who are working to create young civil leaders would hurry up. We need them now.

I think (hope) there will be a huge turnaround in the American political scene in November. I just hope it is in time.

Your blog is a touch stone for me, a safety zone and some measure of positivity in a bubble. I love what you write, your walks and finds and of course you can never go wrong with Olga and Dave. Shock and despair and possible solutions- if they come to you, would be welcome, also. A good mind/opinion - always welcomed.Just do what you do, it is all good. Stay well, above all!

I'm right with you though I do dedicate an occasional post to the death throes of America, at least the America I have known. we're not just taking one or two giant steps backward but leap after leap. so yeah for Olga, gardening, and weird stuff on the sidewalk.

Basically I agree with Linda Sue.

But I do have to say, I read your post last night and agreed with you. Today I read 37 Paddington's post, did some reading, and now I think differently. Google "stephen miller trump" if you have the stomach for it. This man is dangerous.

I understand your position and agree, I can only take so much news in a day as I feel total despair otherwise.
I read several blogs to appreciate other lives, occupations and creativity. It helps to see the farms, gardens, animals and daily life in other parts of the U.S. and the rest of the world.
I truly hope that the mid-term elections offer us chances for new leadership.

After the last election I lay awake most of the night, sick to my stomach. Afterward I thought maybe I had overreacted, but now I know that my body knew exactly what was coming. Not to dismiss other people's children, but I'm glad I never had any!

Alphie: I suspect Eleanor is still out there and either hasn't bloomed or we failed to appropriately notice her. We have so many rose bushes!

Frances: Well, I try not to go so far as to be "head in the sand." I DO think we need to be aware and speak up when it's constructive and beneficial. (And we certainly need to vote!) But angsting about it all just doesn't do anyone any good.

YP: Well, thanks for the vote of confidence, YP, and I'm sure now and then I'll still make a political remark or two. I'm not saying we should turn a blind eye. I just have to maintain my own sanity!

Jennifer: Bravo for being active. I think that's the key -- actually getting out and DOING stuff to fight this dark wave. I've done some protesting of my own and no doubt will continue to do so.

Ms Moon: I know, I've talked about my conflict over this in the past, haven't I? I don't know why I feel like readers expect me to weigh in, because they probably don't. And yes, this is my island of calm!

Red: That is ABSOLUTELY true! Vote, everybody, and vote responsibly!

Robin: Yeah, that's exactly it -- it's a matter of balancing the world. I need that balance and I think readers do too.

Sharon: Isn't it strange, how this is even more threatening than the duck-and-cover cold war days? I think this feeling that we are tearing at each other is what's frightening. Back in the cold war, at least everyone was more or less on the same page.

Catalyst: God, I hope you're right. (I'm not calling YOU God. I like you but not that much.)

Linda Sue: A measure of positivity -- that's exactly what I'm trying to be on the ol' blog. Not to be in denial, but just to represent the good things that sustain us all.

Ellen: It HAS been leap after leap. I don't know how we will ever undo it all. But maybe we will.

Cheryl W: Me too! I have to ration my intake of news, and I have to read other things as well. I'm glad you come around to check out my garden and the adventures of Olga. :)

Bug: I say that to Dave all the time. It seems like a selfish response, because there ARE so many children that we need to be worried about -- but I am so glad I have none of my own.

I do agree with you. It's your blog and you write about whatever you want.

But what scares me is this overall attitude I hear and read that "Oh everything is so awful, I get too upset so I must stop reading the news - and concentrate on the good things in life."
Fine with me for a blog. But the history of my country and my family has taught me what happens when we look away. To the point where today's historians and political scientist rightly elaborate on what (in Germany's case) were fascism's willing collaborators simply by pretending that things weren't really that bad or that one couldn't do much anyway and so on.