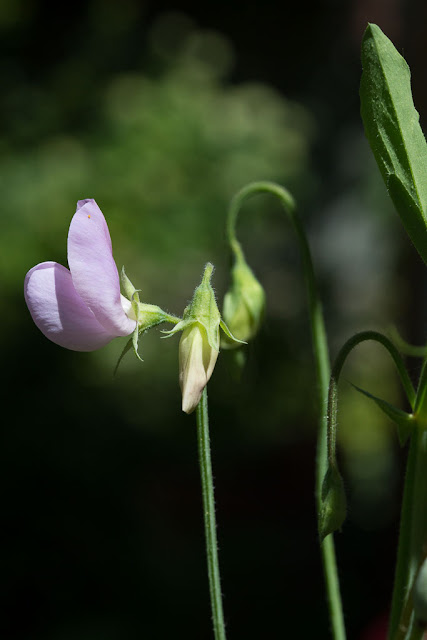 Remember those sweet pea seeds I planted back in March? Probably not, but anyway, I'd collected and saved them from our sweet pea plants last year. I wanted to try to grow them on as a kind of experiment -- I wasn't sure the seeds would be fertile or if the plants would bloom.

Ta-da! Finally, FINALLY, those little devils have started to flower. That's the first one, above, but as you can see there are some other buds coming along. Success!

Our nasturtiums are also blooming, and the cosmos and zinnias are coming along too, though we've had no flowers yet. If we have any disappointment on the seed front this year, it's the snapdragons. They haven't done much, although I think a lot of them were dug up by squirrels -- just like my purple poppies, which had finally been gaining some height before I saw, yesterday, that a squirrel rummaged through the pot. Some of them are still intact, but...grrrrrr.... 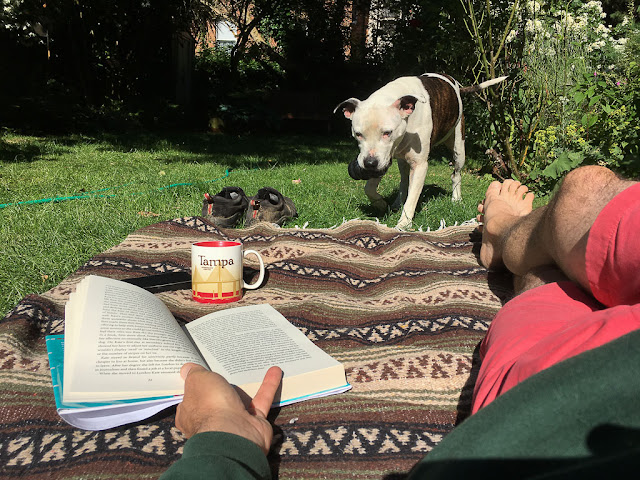 This is how I spent my morning -- lying on the grass, reading. It was cool enough that I needed a sweatshirt, but at least I could wear shorts!

The garden is a flurry of activity at this time of year. Right now there are tits and robins and blackbirds on the feeders, and yesterday I watched a blackbird parent feeding its (quite large) chick. It would fly up to the suet feeder, collect some suet, bring it down to the ground and feed the chick. The chick could fly, and it was practically as big as the parent, but brown-streaked rather than black -- I'm not sure why it wasn't collecting its own food. Like any adolescent, it would apparently rather sit on the couch and play video games.

Anyway, what else did I do? I mowed the lawn. I transcribed more of my old journals. I went to the grocery store. I trimmed our front garden, which is basically a mountain of shrubbery -- some shrubs need to be cut back every now and then so as not to overwhelm the others. And between all the shrubs we have a wild foxglove blooming! Nature finds a way!

I also watched "The African Queen," which I'd wanted to see again since I read "Blood River," that book about the Congo, a few months ago. It was filmed there, and if Bogie and Hepburn aren't enough reason to watch it, the shots of the crocodiles and hippos and elephants certainly are. It's interesting to note that the population of the Congo when that movie was made, in 1950, was 12 million. Despite all the civil war and deprivation in that country since, it's now 78 million and counting. I wonder how those animals are faring?
Posted by Steve Reed at 7:25 AM