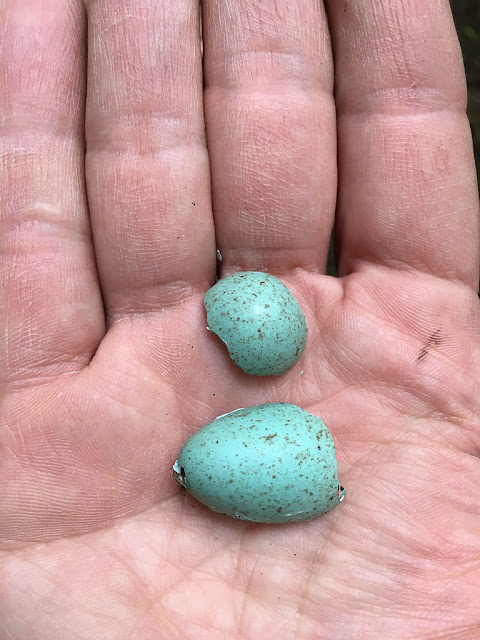 It's another day for random photos, because, once again, I don't have much to write. (Consider yourselves lucky!)

I found these eggshell remnants on Hampstead Heath while walking Olga a few weeks ago. I hope this little robin -- I think it's a robin -- hatched, as opposed to being consumed.

(On a related note, I saw a brand-new robin flying in our garden on Saturday. It had little stubby wings and a little stubby tail, but it managed to stay airborne so I think its most dangerous days are probably behind it!) 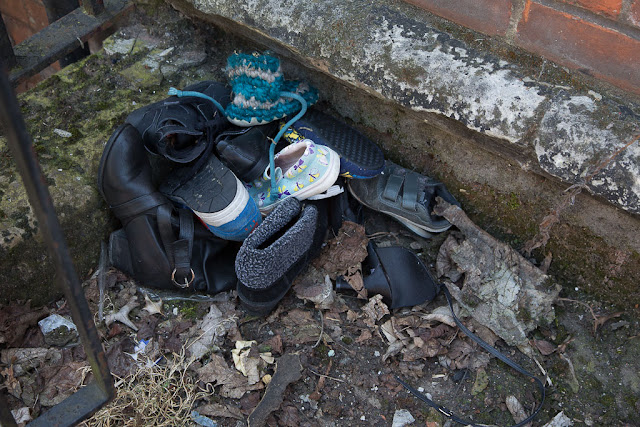 This random pile of shoes has been lying near the high street for weeks. In fact, I think a few more shoes have been added to the pile since I took this picture. Why is there only one of each? 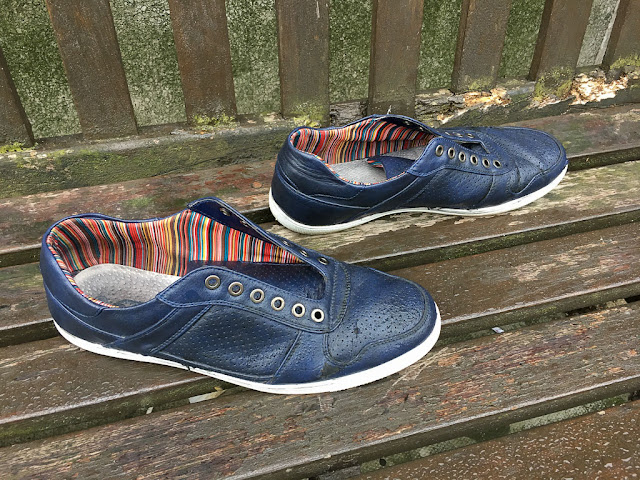 And this snazzy pair was abandoned on a bench on Finchley Road yesterday morning -- free to any takers, I suppose. They look a little worn out but they're cool. (No, I did not take them.) 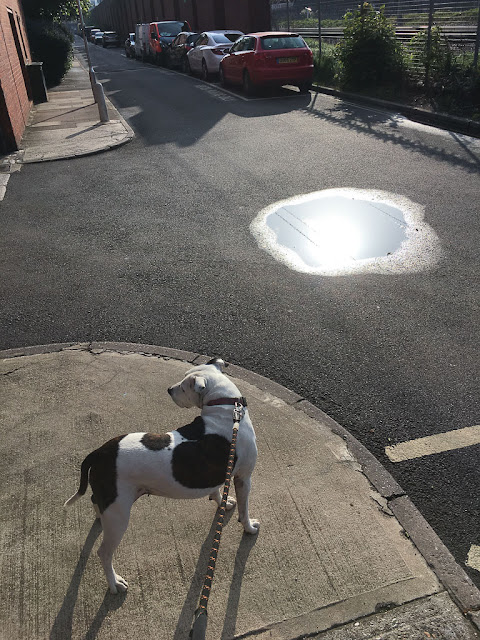 Here's Olga on her morning walk, with a puddle reflecting the bright spring sun... 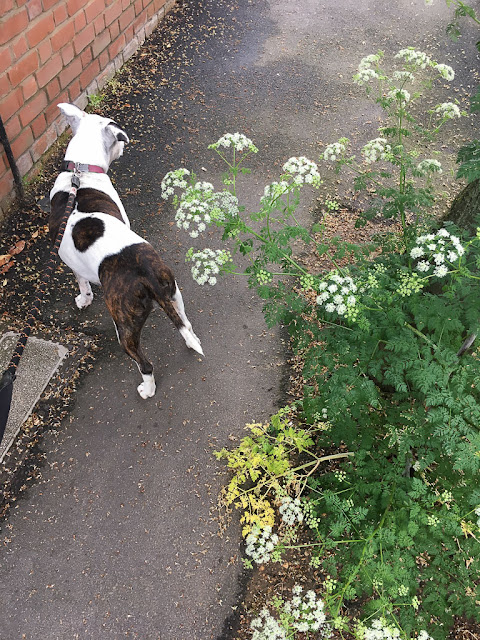 ...and here she is with the cow parsley now blooming on the street where we live. This is the same kind of plant we're putting in the wildflower area in our back garden, and it's supposed to self-seed. It must be about four feet tall. 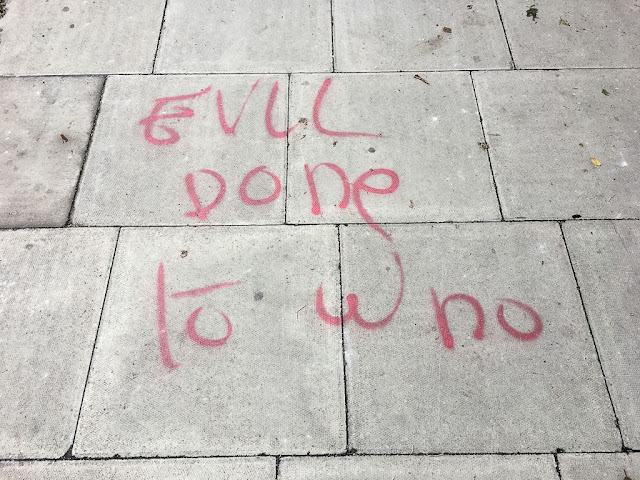 Found on the sidewalk on Abbey Road. Any ideas? 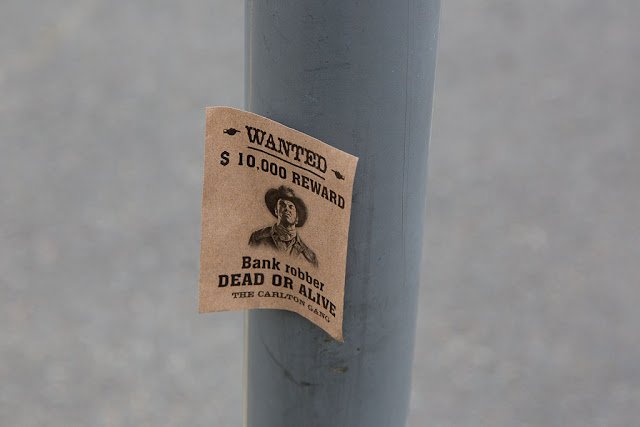 And I found this stuck to a post in East London. I tried to Google it, to find out if there's a backstory behind the image, and I came up only with a birthday card collage made by a woman who included the same wanted poster -- she "printed it off" from somewhere. But I guess the dude and "The Carlton Gang" are fictional...? 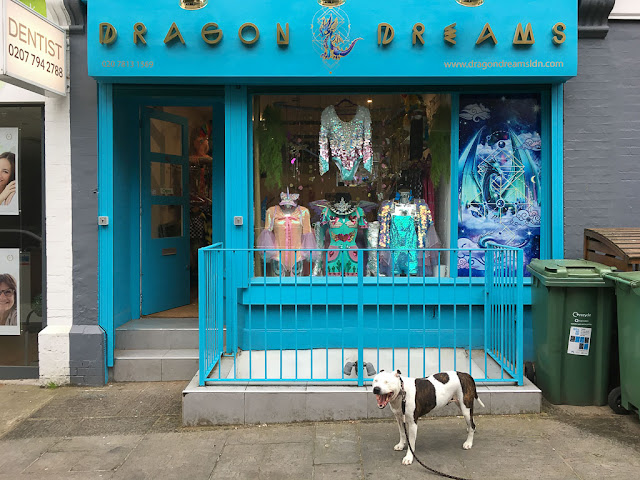 This new and very far-out shop recently opened in our neighborhood. I love this picture because Olga looks like she's laughing hysterically. (She was actually in mid-yawn.)
Posted by Steve Reed at 6:14 AM

Olga and Cow Parsley, what more could I want. lol
Briony
x

"Evil done to who"? Yes I do have some ideas. The evil done to the desperate people of Yemen by Saudi Arabia, covertly supported by the USA. Another idea is the evil done to he British people by self-seekers like Boris Johnson and Michael Gove who ignored the truth about departing from the EU and encouraged the electorate to vote for Brexit. Finally, my last idea is the evil done to London's rodent population by two ex-pat Americans living in a garden flat at West Hampstead.

I love how Olga always seems to be smiling!

We have several families of birds at our feeders, and we've started noticing lots if the fledglings will beg from any adult bird, whether they're of the same species or not! It's funny to see a baby cardinal chasing a sparrow around and presenting an open mouth hoping for a morsel!

Hello, Dragon Dreams; the bad acid at Woodstock called and it wants its clothes back.

I think those shoes are quite handsome. I doubt I'd take them home either but I'd buy a new pair like them.
That looks like a hatched egg to me. How lovely it is!

You saw a wide variety of stuff in one day. It pays to keep moving.

I like to think of Olga laughing at that shop! The inside lining on those shoes is very attractive. If you find out what evil was done to who, you will have to let us know.

Great set of photos. I love the way you see your world. You make me look at mine more closely these days.

What do they sell in Dragon Dreams? It's the kind of shop that would definitely call me inside to find out for myself. Great portraits of Olga!

Apparently "The Carlton Gang" poster was printed from a CD sold to "crafters". Appears to be entirely fictional.

Cow parsley is another plant (along with lupins) that grows wild here and is not welcome in flower beds. But it's quite beautiful along roadsides and in meadows. You may want to check some sources regarding its sap; some websites say it can be irritating to the skin while others don't mention that. I've never picked it so I don't have any personal experience about it.

Steve! I'm sure you can find some cool duds in that store.

Briony: That's exactly how I feel! :)

YP: OK, don't make me feel more guilty than I already do!

Jennifer: She is a very smiley dog. I've never noticed that with birds -- how funny!

Vivian: Or the 1978 gymnastics tournament!

Ms Moon: I DO like the shoes, but yeah, they've seen better days. I'm glad you think the egg is hatched. That makes me feel better!

Sharon: Well, I can think of a lot of examples of evil being done (as YP says above) but who knows what that person is specifically referring to!

Robin: Thanks! That is actually one of my main objectives in photography -- to help people notice the beauty of the everyday. (Not that I notice everything -- we all miss so much of what goes on around us -- but I'm working on it!)

37P: I think it sells crystals and supernatural stuff like that. And clothing, obviously. But I did not go in.

Catalyst: That was my conclusion too. Very peculiar to find it stuck to a lamppost in East London!

Jenny-O: Well, I won't be picking it, so I don't mind if it's a bit irritating. It's great for bees and other insects, apparently. We also have loosestrife in our garden, which I know is a major scourge in North America. Interesting how things that grow harmlessly here are pests elsewhere!

Ellen: I would definitely raise some eyebrows!