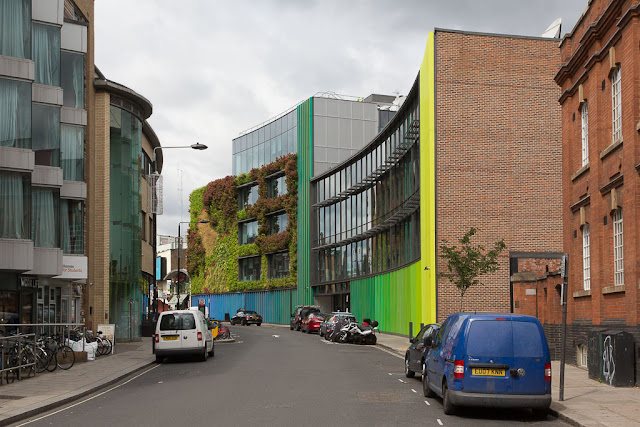 While walking in Camden last week I came across this very colorful building. From one end of the street, it displays a rainbow of hues from the cooler end of the color spectrum. But if you walk past it and then look back... 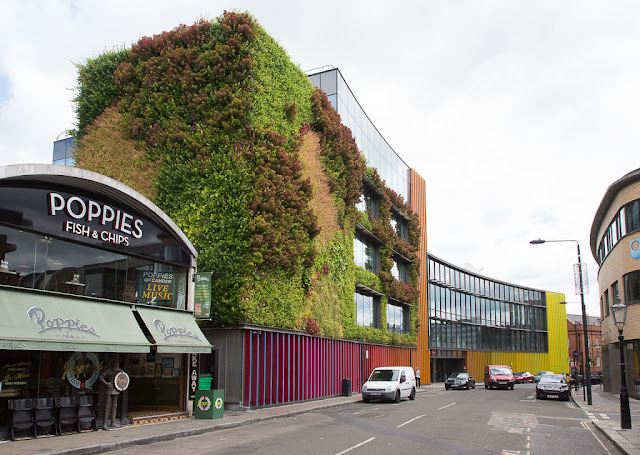 ...it's the warm colors that you see. Pretty cool, huh? It has to do with that polychrome corrugated facade. Apparently this is the headquarters for MTV and other Viacom Media properties.

That's also a very impressive living wall, isn't it? Much better than the one I sometimes pass when I'm walking with Olga in West Hampstead: 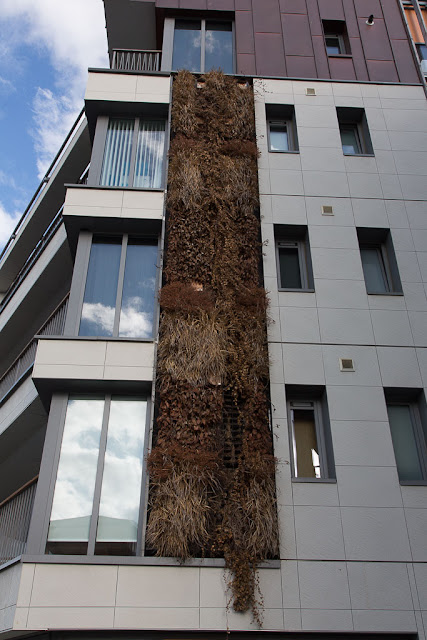 Isn't that just sad? I can't imagine who would go to the trouble and effort to include a feature like that on a building and then let it die. Seems like some re-engineering is in order.

Anyway, I have very little news here. I stayed in all day yesterday, working in the garden and around the house, doing the sorts of mundane tasks that don't merit description. I left the house only to walk the dog and go to the grocery store.

I've been doing some slightly bizarre eating, because I'm trying to use up a lot of random ingredients that we've had sitting around the house for ages. An example: For dinner last night I made pasta, but I used a box of lasagna noodles that we've probably had in the cabinet for at least a year. A noodle is a noodle, right? (I'm sure pasta aficionados would tell me that's not true, but for me, it is.) Anyway, it tasted fine.

I haven't yet devised any recipes that require mass quantities of cinnamon. But I'm working on it.

More of the same domesticity is on the horizon today. Ah, vacation!
Posted by Steve Reed at 7:56 AM

I guess you would walk one way down the street if it was hot and the other if it was cold, lol
I am wondering how they water that living wall, never seen anything like that before.
Briony
x

I passed that very same building in Camden on April 20th this year. I was equally impressed. As for cinnamon, it is delicious on its own and can bring many health benefits. I have a full jar of unadulterated cinnamon every morning and am now as fit as a butcher's dog. Try it.

That building is awesome! How clever!

That building is amazing! And yes, that wall of deadness is one of the saddest things I've ever seen. Time for some re-engineering indeed!
Your crack me up with your while-Dave's-away eating of strange things.
Treat yourself tonight to something good. And...new?

you are right, a noodle is a noodle. That building is amazing, the other not so much ...looks like it would catch fire easily.

You do see some wildly interesting things there on your walks. The building is very cool, and yes, that dead plant is a sad sight. Enjoy your creative cooking!

what a fabulous building! and yeah, creative cooking.

I love that building. That colorful siding is a clever idea and those plants are gorgeous. Can't say the same for the other place. That really is a crime. I'm with you, a noodle is a noodle.

I was disappointed you didn't tell us about Poppy's Fish and Chips!

Such a cool building! Both the changing colours and the living wall. The most exciting building we have here has extra-big windows replacing some of the wall space. I know, right?! Really sets your pulse a-racing!

Noodles last forever if they're dry. Or at least fifteen years. My husband ran an inn that long ago and when it closed we took the food stores home. We are still eating our way through the supersize box of spaghetti noodles. Haven't died yet.

As for the cinnamon, a couple of years ago you would have been able to sell it for a bundle to teenage boys doing the cinnamon challenge (stuff a large spoonful of cinnamon in mouth, try to gag it down without dying). There are probably still YouTube videos out there :) Myself, I'd rather start making apple pie, apple crisp, and cinnamon rolls every week!

I have never been a fan of living walls. I don't really know why but they kind of creep me out.

Briony: It probably has some kind of built-in irrigation system -- something that the wall on the bottom clearly lacked!

YP: You're doing the "cinnamon challenge," whether you know it or not. :D

Jennifer: Isn't it? So much to do, and so much time to do it!

Ms Moon: Funny you should say that. I made a (fresh) salmon steak last night. :)

Linda Sue: You know, I didn't even think about the fire risk, but you're right. I'm surprised it's legal. (And that building has cladding on it too, doesn't it?!)

Robin: London is an interesting town. :)

Ellen: It feels so good to get some of the cupboards emptied out!

Sharon: That dead wall just depresses me every time I see it.

Catalyst: I have never been to Poppie's! I couldn't say much about it. If I go I promise to give you a review. :)

Jenny-O: I was thinking cinnamon toast. I'm not nearly as ambitious as you. :)

37P: I think they're beautiful when they're done well. A lot of them aren't done well, though, so they look kind of ragged and -- in extreme cases like the one on the bottom here -- downright pathetic!

Re cinnamon....send it to me. I'm an addict, PS I am still on holiday, and it's official, I am in love with South Wales. It's wonderful. We're off to Oxford tomorrow, but our 5 days here have been like a dream you don't want to wake up from (Whoops, was that a dangling participle?....or were you just pleased to see me?)
PPS. Have you seen the living walls in Barcelona? They have an automatic watering system and on the upper floors of high rise apartments it's like living in a rain forest.

I love cinnamon! I have a little jar of cinnamon sugar to put on toast, which it use regularly. But it will still be a LONG time before we use up our giant jar of cinnamon!

I love that building & was admiring the living wall, but Angela's comment made me remember a science fiction story where a house turned into a living thing - plant tendrils poking through the walls & grabbing people. It was a bit claustrophobic to read!