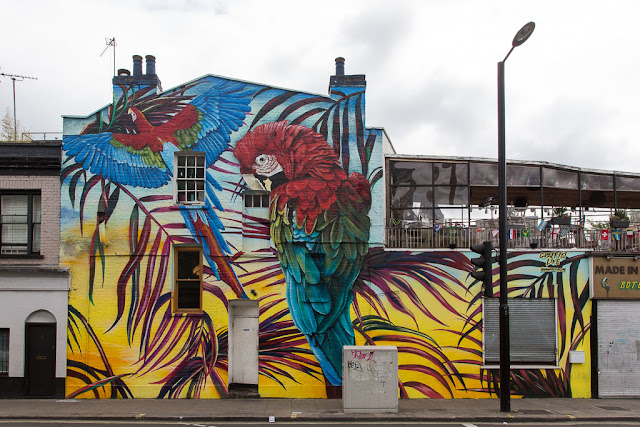 There used to be a big mural of Carmen Miranda on the wall of this Brazilian restaurant in Camden. When Dave and I rode by on the bus the other day, I saw that Carmen had been swapped out for a pair of parrots. I miss her, but I do love the birds. (Maybe younger people don't know who Carmen Miranda is?)

I got myself back to the dentist -- again -- yesterday morning so he could adjust my crown. I tried to live with it, I really did, but it was driving me crazy. I felt like I could barely close my mouth, much less chew. So he ground it down a bit and made some other changes, reducing its height by a millimeter, and that made a big difference. It still feels a bit high, but I think I can adapt.

Then I took a walk through Camden Town, so I could shoot the wall above and some other interesting stuff. It's been a while since I've taken an urban photo walk, having spent all my recent walking time on the LOOP or with the dog, but I hope to do more this summer. I started at the Kentish Town overground station and walked south and then north again, in a sort of U-shape, eventually up Haverstock Hill into Hampstead and then home.

And then, last night, I had my big night on the town with Lulu! I saw "42nd Street," and let me tell you, Lulu may be 69 but she's still got a great voice. It was a fun, flashy show with lots of big song-and-dance numbers  -- I'd seen it in New York years ago and I remember enjoying it there, too.

I bought a glass of white wine at the theater bar before the show, and the barman asked if I wanted a small or large.

I didn't have much time before curtain, so I said, "I think I'll take a small."

He said, "Do you want it in a plastic cup so you can take it to your seat?"