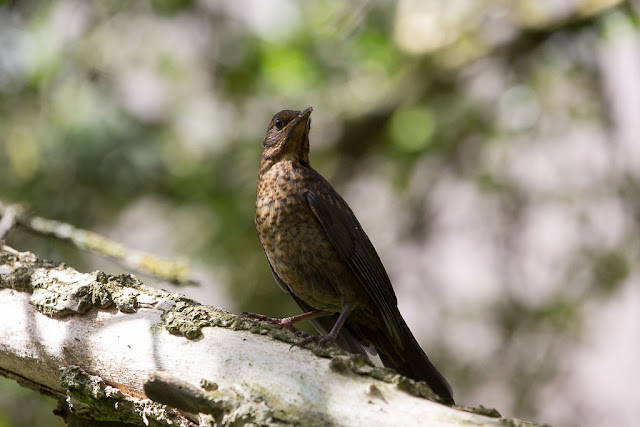 This is the adolescent blackbird that's been trailing his parent around the garden, twittering to be fed. There are two of them, actually. The mother (I assume it's the mother) dutifully plucks morsels from the ground and sticks them into the chicks' mouths, but yesterday I saw one of the chicks pecking the ground on its own. Hopefully they're almost ready to feed themselves, thus preserving Mom's avian sanity. 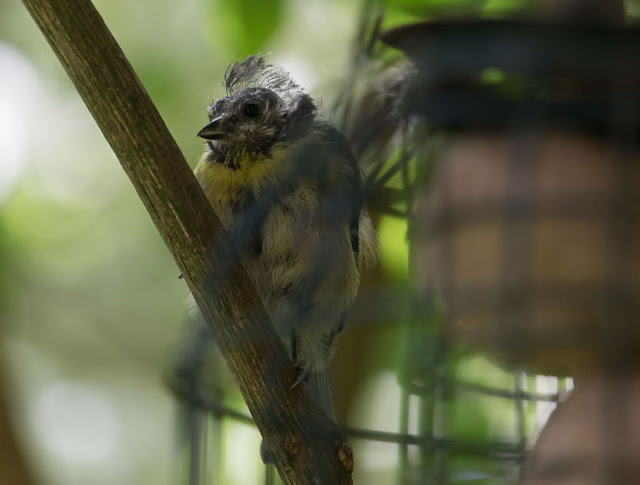 Speaking of awkward adolescents, check out this guy. He's got a kind of punk-rock haircut going on there. This is a blue tit, and I assume it's molting into new feathers -- or maybe it's an adult and this is a seasonal molt? I'm not sure. (That unfocused object in front of him is the suet ball feeder. I couldn't get a clearer shot. I think he's embarrassed.)

I've been sprinkling some mealworms on the ground for the blackbirds, the dunnocks and other ground feeders. Yesterday I filled up a feeder with mealworms, and the starlings discovered them -- it was a noisy mob scene. The feeder was emptied by the end of the afternoon. I'm fine with that, because Dave bought a huge, industrial-sized sack of mealworms a couple of years ago and I'd love to use them up this summer.

Speaking of using up food, I'm still doing some weird eating of my own. Last night I had quinoa, edamame pilaf and fried eggs for dinner. Cleaning out the pantry!

It has been so dry here that yesterday evening I not only watered the garden, but I got out the sprinkler and watered the lawn. We rarely water our grass, but we've had no rain for weeks and there's none on the horizon. Apparently there are wildflires burning on a moor up near Manchester and farmers in some areas are struggling to get enough water for their livestock.

But on the bright side, did you see that a Scottish lawmaker has been praised for discussing her period in Parliament? She went on to advocate for better support for poor women who need menstrual supplies. You go girl! 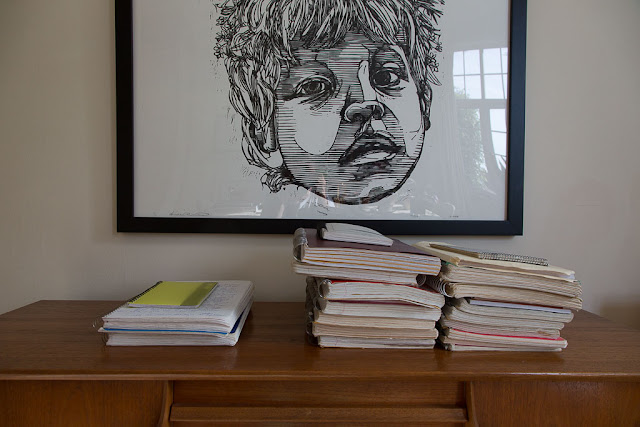 I've mentioned my crazy project to transcribe my old paper journals into a (for now) private blog online, in order to edit them, make them more searchable and to back them up in case, God forbid, the house burns down. I'm almost finished, after three years of on-and-off work. All the journals on the right, from 1989 to 2005, are done. I only have those on the left to go. I think I may wrap up by the end of the summer!
Posted by Steve Reed at 6:56 AM