A Disco Bunny and a Flag Cape 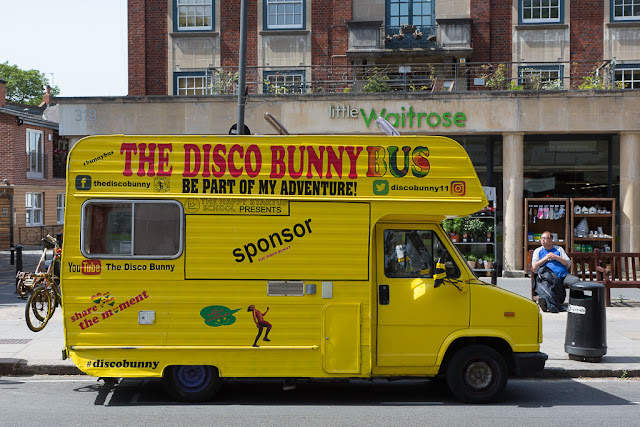 I'm getting started late on the ol' blog this morning. I didn't wake up until 7 a.m.! I've discovered that when Olga starts waggling around at 4:30 a.m., I can put her under the covers and she'll go back to sleep for another few hours. Heaven!

Yesterday I walked down to the high street to catch a bus, and saw this camper sitting outside Waitrose. Up to the time my bus arrived, no one who looked obviously like a "disco bunny" appeared on the scene, but I read later on Facebook that he was dancing down by the train station. From what I gather, he's a performance artist who travels around and dances in public. I wish I'd seen him!

I caught the bus to Notting Hill to visit our friends and former neighbors Linda and Chris. We went to lunch and had a great time catching up. 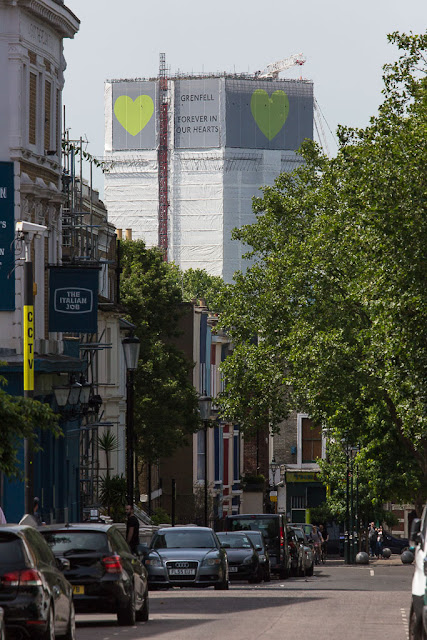 Above the streets of the old 'hood, the somber reminder of Grenfell Tower has been shrouded in scaffolding marked with the words "Grenfell: Forever in our Hearts."

We went to a cafe that specializes in farm-fresh food, and I had English muffins with poached eggs, spinach and hollandaise -- essentially eggs Florentine. And wine, of course! Then, after lunch, I had a few hours to kill, so I walked eastward through Bayswater and into Mayfair. 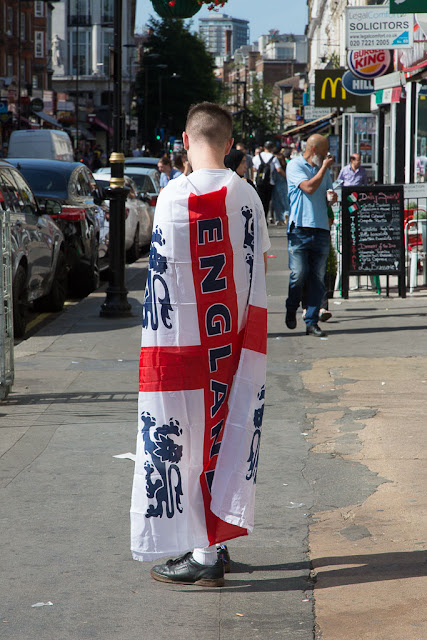 There were lots of enthusiastic football supporters out and about. England won its game yesterday, so it's advancing in the World Cup. Big excitement! (For some people.)

In Mayfair I met up with my co-worker Lorraine for a concert of choral music where another co-worker, Lisa, was performing. It was an excellent performance of some rather somber pieces, C. H. H. Parry's "Songs of Farewell," mixed in with old British folk songs. As you can probably tell, I enjoyed the folk songs more, but it's interesting that a lot of the truly musical people on hand seemed to prefer the Parry. I guess it was more complex.

Afterwards Lorraine and I went to dinner, where we dined al fresco (mac and cheese!) in the warm evening air. I got home around 10 p.m., so I owe Olga more time and attention today!
Posted by Steve Reed at 8:14 AM

I am pleased to see that Grenfell Tower is finally covered up ! Can't believe how long that people had to look out and see the burnt tower that was ! I would have thought that it would have been removed long since.

What did you think of Jesse Lingard's goal? Beautiful wasn't it? And did you see the way that Harry Kane was wrestled to the ground giving us our second penalty? And as you are now fully integrated into English society I just know you were wearing your England shirt singing...
"Three lions on the shirt
Jules Rimet's still gleaming
Fifty years of hurt
Never stopped believing...
IT'S COMING HOME! IT'S COMING!
FOOTBALL'S COMING HOME!"

Sounds like you're having a very nice vacation so far!

Your day was filled with lots of good activity.

sounds like when the cat's away the mouse will play!

You really had such a full day of friendships and yummy food. A lovely way to spend a Sunday. World Cup? What's that? LOL.

That sounds like a day will spent! And, good for you for sleeping in! That's nice to do every now and then.

The shroud covering Grenfell - grateful for that but I think that leaving it a visible corpse had more impact- raw, not glossed over with a green heart of not caring enough.
What an excellent day you had! That is the thing about living in London isn't it? Excellent days- easy to scoot around and do stuff.
Disco Bunny - I would stalk that - maybe you will get another chance sometime. Hilarious.
Olga is so good to be left for a few hours without freaking out- Dexter was too emotionally attached, I could never leave, maybe it is the breed.

Yes, a great day of gadding about and dining out.

The Disco Bunny seems like a good-hearted guy -- and that pink jumpsuit in his FB profile - awesome :)

You had a busy day. (And while you had your busy day, I'm sure Olga was storing up energy like a rechargeable battery, ready for tomorrow :) )

Frances: I think the tower is being preserved for now because the inquiry into the fire is ongoing. When that's over, presumably it will be demolished.

YP: You're speaking a foreign language!

Red: I try to stay busy!

Ellen: Ha! And much to his relief. He wouldn't have wanted to do any of this!

Robin: That is exactly how I feel!

Sharon: It was pretty great!

Linda Sue: I agree with you. It was horrible to have to look at that burned-out hulk, but it SHOULD be horrible. It's too easy for wealthy Londoners to shove poor people into housing blocks and ignore their concerns and forget about them.

Catalyst: It was a great day!