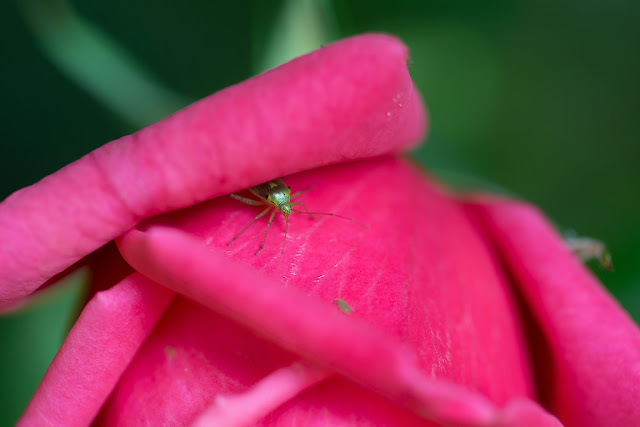 This little green bug was recently clambering about on one of our roses, but when I got out the camera to take a picture he was clearly intimidated. He scooched backwards to hide between the petals, as if they were blankets. I wonder if he was hunting that little aphid in the foreground?

I read yesterday that Joseph Pintauro died. He was a poet, novelist and playwright who touched my life in several ways. I've written already about the groovy books of art and poetry that he co-wrote in the late 1960s and that I still treasure. He also wrote numerous plays, including one that I saw when I lived in New York -- and apparently I even met Pintauro that evening, although I wouldn't have remembered it if I hadn't written it on my blog. (My mind is going, I swear.) 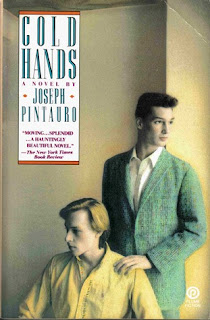 I most associate him with the period when I was coming out in the mid-'80s. I used to go to Washington, D.C. every year with my family to visit my grandmother and other relatives, and on those trips, when I was 19 or 20, I would travel into the city alone on the Metro for a day of exploration. I'd tell my family I was going to the Smithsonian, and maybe I did -- but I also went to Lambda Rising, a famous gay book store on DuPont Circle, where I would buy a novel. I remember doing this twice -- once it was John Fox's "The Boys on the Rock," and once it was Pintauro's "Cold Hands." I'd sit for hours on the Metro, riding around Washington and its suburbs, reading my gay book. And then I'd return to my family with an at least partly fictional account of seeing the Air and Space Museum for the fiftieth time.

I loved "The Boys on the Rock" -- in fact, I still have my copy -- but I was less enthusiastic about "Cold Hands." It had something to do with two Italian-American cousins and their exotic Mame-like aunt, who was named Zia Fantasia, if I'm not mistaken. Still, I will always be indebted to Pintauro for writing one of the books that occupied my attention on the Metro in those days when I was coming to terms with my identity as a gay man -- not to mention his colorful books of hippie poetry.
Posted by Steve Reed at 6:47 AM