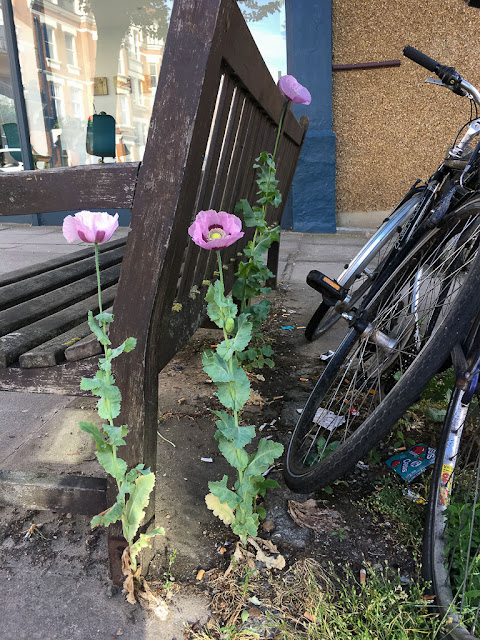 Some volunteer poppies have grown in the little pocket park at the top of our street, the same place where the pot plant grew last summer. We always assumed the pot plant appeared because someone rolled a doobie while sitting on that bench, tossing the seeds on the ground. Do you think someone was sitting there more recently doing opium?

Probably not. I know nothing about doing opium, but I'm pretty sure it doesn't come with viable seeds. I like the poppies, though. That's the same variety I tried to grow in our garden with seeds from my neighbor, and for some reason, mine have grown no higher than about two centimeters. They're stuck in eternal sprout-hood. Yet these feral ones seem to spread effortlessly.

Yesterday as I was re-reading my blog post in the afternoon -- which I do sometimes when I go through my blogroll to read everyone else's blogs -- I realized that I'd made an ellipsis ( ... ) with four commas rather than three periods.

I corrected it, but good grief! Are my eyes that bad?! I think I've reached the point where I need to wear my glasses to work on my computer. 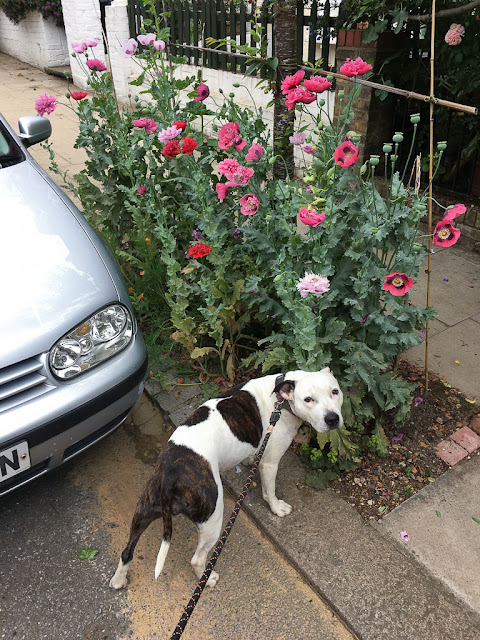 Here's another dramatic stand of poppies in the 'hood.

Not to drone on and on about our mouse situation, but we're up to ten or possibly eleven (I've lost count) that we've trapped in the house. And the other day, as Dave and I were watching TV with the back door open, one ran inside from the garden! I chased it back out again. I'd thought our peanut feeder might be responsible for a household mouse explosion, but now I suspect it's on a larger scale. Mrs. Kravitz told me weeks ago that she'd trapped six or seven in her house, and that was before we set any of our traps.

I wonder if it's related to Camden Council's rubbish collection schedule, which a little more than a year ago changed to once every two weeks for non-recyclables? That leaves a lot of trash sitting around for a long time. In theory, people are storing it in mouse-proof bins, and the vermin-attracting rubbish -- food waste -- is collected weekly to be recycled as compost. But I bet a lot of people don't bother to separate their trash, and even separated, some household garbage (paper towels, cling film, non-recyclable containers) is bound to contain traces of food.

A Camden "mouse surge" is kind of a creepy thought, but in the four years we've lived here we never saw or heard indoor mice until mid-March of this year, and since then it's been crazy. (We had seen a few in the garden, though.)

I'd get a cat, but Dave is allergic and Olga would never tolerate a feline companion.

Anyway, I think the situation is better now, since we've killed so many, locked up the dog food and rodent-proofed the peanut feeder. But stay tuned!
Posted by Steve Reed at 6:53 AM