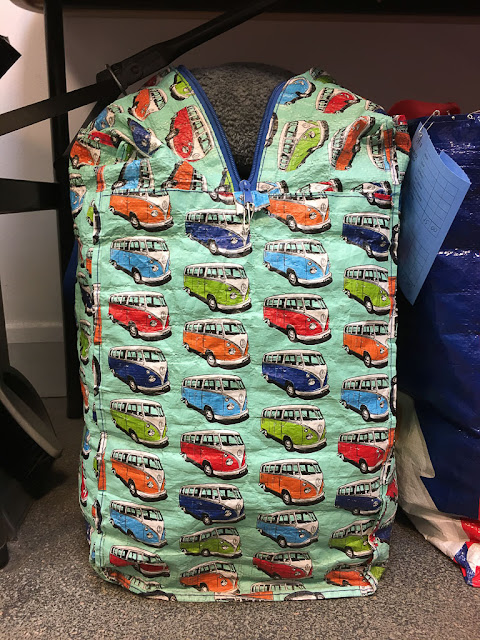 I went to the laundromat yesterday to pick up our cleaning, and I saw this amazing bag sitting beneath one of the laundry tables. It immediately brought to mind my dad and my brother, Volkswagen enthusiasts extraordinaire. The attendant laughed when I knelt down to take a picture of it, but since I can't own the bag I at least want a photo!

I was ambivalent about Twitter but what killed it for me was the debate about the high school girl in Utah who wore the Chinese dress to her prom. She posted pictures, and a gaggle of outraged Tweeters piled onto her for "cultural appropriation," criticizing her for wearing a Chinese dress because she wasn't Chinese and thus couldn't fully understand the garment's cultural meaning.

I could write a whole post about what I don't understand about the notion of "cultural appropriation." To me, clothing, dance, food and other articles of any particular culture are there to be admired and enjoyed. I don't see what's wrong with others adapting them, as long as it's done in a respectful way, and this girl seemed to be wearing her dress respectfully. Madonna caught a load of heat back in the '90s for adapting clothing and dance styles from minority and gay communities, and I felt the same way about it then -- she's an artist, and that's what artists do. A culture is not just hairstyles, clothing and dance moves -- it's more than that, and when others adapt the superficial elements for their own use, the deeper culture, it seems to me, remains intact. (Asians were completely mystified about why some Asian-Americans were upset about the prom dress.)

Besides, and at the risk of sounding like a crotchety grandpa, should we not eat pizza? Chow mein? Are Nehru jackets off-limits? Bangle bracelets? Is it bad for me to go to a soul food restaurant? Where does it stop?

So, anyway, this discussion seemed so patently ridiculous, and so unreasonably angry, that I deleted Twitter. I  just don't need the negativity. (Of course, I speak from the secure standpoint of the economically privileged white male, though I think I gain diversity points for being a gay liberal.) 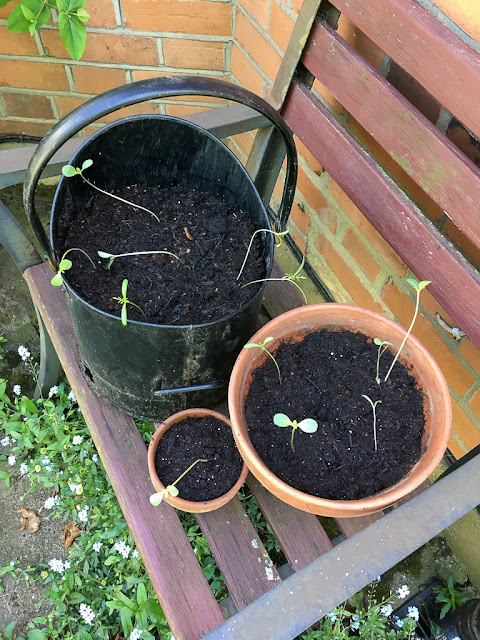 I transplanted some of my approximately two million cosmos and zinnia seedlings yesterday. Now I have about a dozen pots sitting around that look like this. Pathetic, but hopefully they'll soon be more filled in.

It was painstaking work, and I gotta say, I don't really see the point of starting seeds in seed trays and then moving the seedlings -- which is what many gardening shows advocate. Can't we just wait until the frosts are past and put the seeds straight into the ground? Or does that delay planting too long?

I gave one of the seed trays to Mrs. Kravitz so she could have some plants, too. 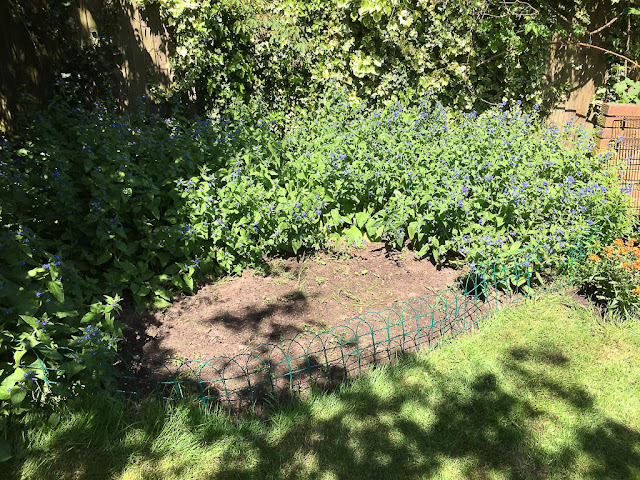 Then again, putting seeds straight into the ground hasn't really worked in the wildflower garden, which is virtually devoid of life (except for that spectacular explosion of wild borage in back). I'm pretty sure I saw tiny sprouts that then disappeared -- perhaps eaten by birds or our voracious slugs? Anyway, I'm giving it more time. Something is bound to grow there, especially now that the sun is out and the ground is warming up. I may try a third packet of seeds if I get inspired.
Posted by Steve Reed at 7:06 AM