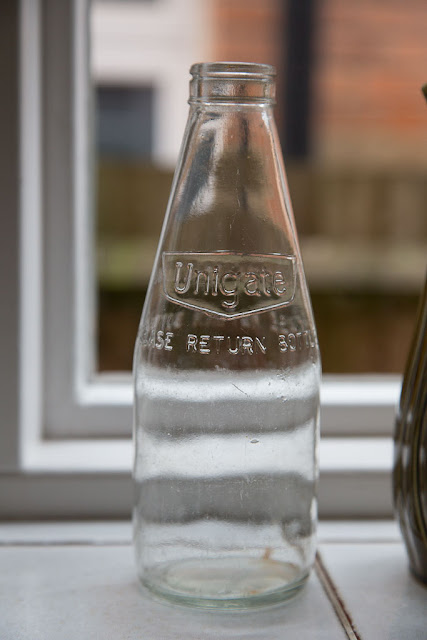 I found another cool old bottle the other day. It's a Unigate milk bottle, and apparently the Unigate brand name was discontinued in 2000, so it has to be at least 18 years old. I'm thinking it's probably from the '80s or thereabouts, based on similar items I see elsewhere online.

I was walking Olga along the Black Path in West Hampstead, which I sometimes call the Trash Path because of the prodigious quantities of bottles, cans and other litter along its length. I was sort of absent-mindedly eyeing the trash as I walked when I saw embossed glass -- often a sign of something interesting. So I reached through the fence (the path runs along a fenced rail line) and pulled out this bottle.

Apparently Unigate was a big name among English dairies until the company was sold in 2000 and its name changed. 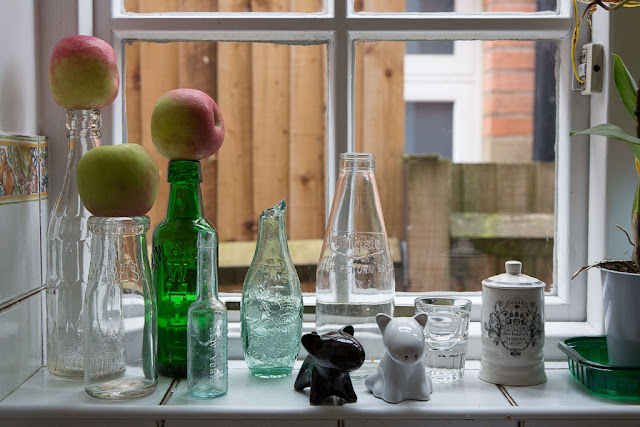 Anyway, I now have quite a little assortment of found bottles on our kitchen windowsill!

(Do you like Dave's method for storing apples?)
Posted by Steve Reed at 7:49 AM

No, I do not like Dave's method for storing apples but I do like your new bottle and the fact that every item on that sill has a story behind it.

Very cool find and grand collection of bottles you have. I do like the way Dave stores apples.

It was a very different technology at that time. Stuff could be reused.

That is a pretty collection of bottles and perfect for a kitchen window. You have been lucky finding some great looking old bottles. When I was a kid, milk only came in bottles. Even gallon jugs were glass. Now it's rare to see a single bottle in the dairy case.

You were right, that last photo was a quail. I went back and added the names of the birds. I'm not sure why I didn't think to do that when I wrote the post.

The apples look happy - the bottles look grateful , Except for that dangerous looking greenish one. It may do damage one day as you are reaching for an apple.

what a great addition to your found bottle collection.

The bottles are great but I'm worried about that electrical(?) connection in the upper right of your photo. It doesn't look up to code to me.

I do love those bottles. It's funny how a person's mind can work. In this case, MY mind. I keep picturing the worst case scenario -- someone reaching for an apple and getting sliced by the pointy bit on the broken bottle! That's all I can think of when I look at the photo. (Does that mean I am a catastrophic thinker??)

I love all of that -- your sweet collection and the apple storage! Your description of the Trash Road made me think of David Sedaris and his constant work picking up trash. If you can, listen to the NY Times Book Review podcast from this past week. He is interviewed and talks quite a bit about what he does while home in England. Plus he's hilarious about everything else.

I love your display of bottles and the way Dave stores apples. Clever!

Thanks for your comments, everybody! Don't worry about that one bottle with the broken neck. Despite its appearance it's really not THAT sharp and I don't see how we'd cut ourselves on it, unless we really tried.

Catalyst, the "electrical connection" actually isn't that at all. It's part of a yellow spider orchid flower in front of the window latch. No electrics involved!