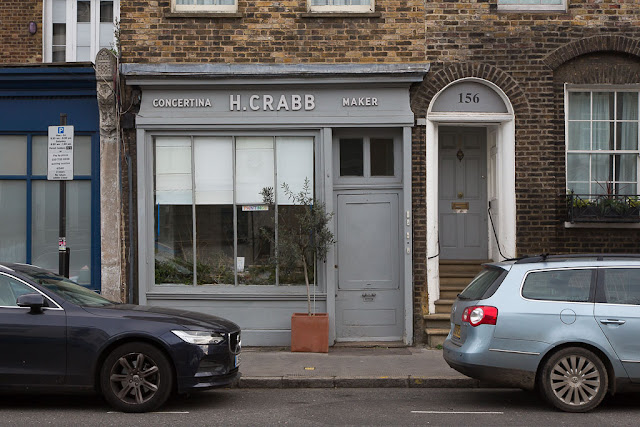 Like me, you may wonder upon seeing this shopfront, "What's a concertina?" Well, I can tell you. It's a small hand-held accordion.  I don't think Mr. (or Ms.?) Crabb is still in business, though. I think it's an art gallery now. In any case, there's a little sign in the window saying "paintings."

I don't have much time to blog this morning. I have to get to work because the library closes early today, and my shift has been moved up a couple of hours. That's to make time for all-school cultural competency training this afternoon, where we explore all the various -isms and -phobias that plague our society at large. (I'm not being snarky about it, honestly. I think this training is probably a good thing.)

We've been reorganizing the fiction section, trying to make room for more books. Over time, any collection of books will grow more in some areas than others, and will need to be shifted to redistribute them more evenly on the shelves. Last week I spent a couple of days doing that, and in the process I weeded out more stuff.

Proust, for example. We had sad-looking early '70s paperback editions of all eight volumes of "Remembrance of Things Past." Most of them hadn't been checked out even once since being added to the collection in 1972!  Obviously Proust is a classic, but realistically, high school kids are not going to read all of that novel. (Just as they aren't going to read Samuel Richardson's "Clarissa," which you may remember I weeded last year. Incidentally, both "Remembrance" and "Clarissa" are among the ten longest novels ever written.) My solution was to buy a fresh new copy of the first volume of "Remembrance," which is called "Swann's Way" and is the one most people read if they read any Proust at all. I suspect no one will check it out either, but at least it takes up less shelf space. We can always get the rest should the need arise, but I suspect it will not, since no one's wanted it in the last half-century.

It sounds terrible, I know, getting rid of a classic. But the truth is, we need more room for Harry Potter and Percy Jackson and the stuff that kids really do read. Am I dumbing down the culture? I don't think so. I think I'm just being realistic.