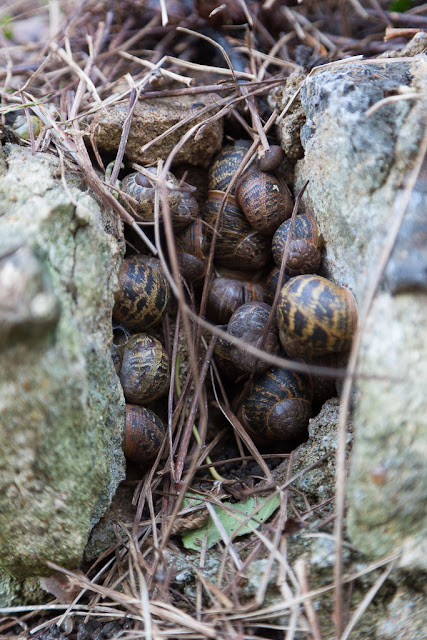 When I was pulling ivy in the garden on Saturday, I stripped it off the rock wall that surrounds our patio. I found this incredible cluster of overwintering snails in a niche in the wall beneath the vines. Isn't that crazy? I count 17 of them -- and there were more in other locations.

Dave, ever the farmer, said, "Kill them!" But I just left them there. It seems a violation of the rules of war to kill the enemy when it's sleeping.

My feeling about snails is, as long as they're eating old leaves and other garbagey stuff, I don't mind them at all. They're only a problem when they get on our good plants. So we'll continue using snail deterrents to steer them away. I bought some copper "slug rings" to put around vulnerable plants -- we'll see how well they work. I have one around a tulip now and so far, so good. 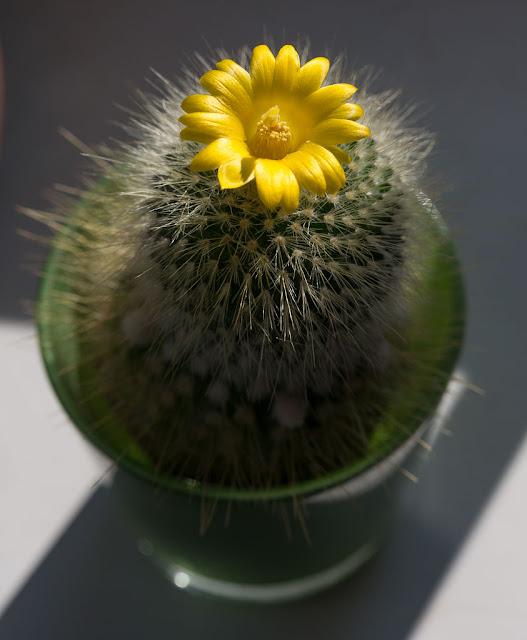 Our cactus is now fully flowering, as you can see. This is such an unexpected joy to me -- I've never had it happen before with a potted desert cactus. As you can see, I removed that ring of orange fake flowers from around its base. They pulled right out -- they were on long straw pins inserted into the plant. Supposedly it won't hurt the cactus to remove them, or so I read.

Yesterday was a quiet day at home. A little more gardening, a walk with Olga in the cemetery. Oh, and I learned (via blog pal Linda Sue, who is like a human news aggregator) that Malta was battered over the weekend by high winds and crashing waves, uprooting trees and causing power cuts. Holy cow! It's so hard to believe, because when we were there just the day before the storm struck, it was sunny and tranquil. Talk about dodging a bullet!
Posted by Steve Reed at 7:06 AM