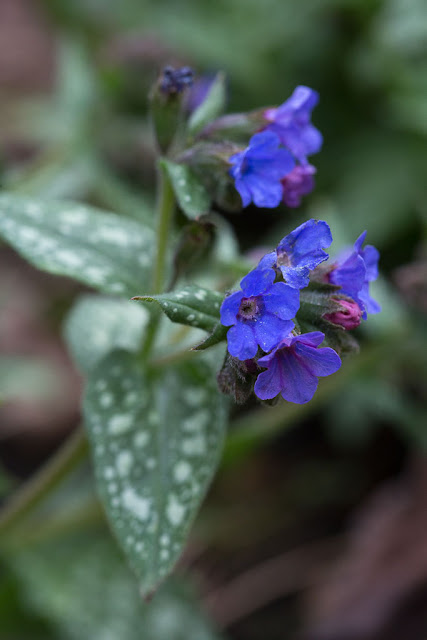 I know I talked about going on a photo walk this weekend, but the motivation just wasn't there. Yesterday was a nice day but I felt like I had so much to do at home, I'd better just stay here and do it!

I worked a bit in the garden, lightly trimming the bushes in the front of the house and cutting back the geraniums. Our lungworts are blooming, as you can see. They're in the same family as borage and forget-me-nots, which is why they look somewhat similar. We have a spotted variety (above) and a plain one (below). I'm seeing a few tentative forget-me-nots out there, too.

Then Dave and I took to the high street to run some errands. For Christmas I gave him a gift card to a cookware shop, so we redeemed that -- he wanted a new nonstick skillet, and we wound up getting three of various sizes. Of course that was more than the value of the gift card, but that's fine. This shows why retailers like gift cards -- not only do they get to sit on the money for a few months (I bought it in December), but card-holders always wind up buying more than the card will allow!

We visited a new pastry shop, where we got some desserts -- a smooth and glossy piece of caramel cake for Dave and chocolate pudding for me. We now have SIX bakeries on our high street, all doing some combination of breads, pastries and breakfasts. Frankly, we seem oversupplied. I don't know how they all stay in business. 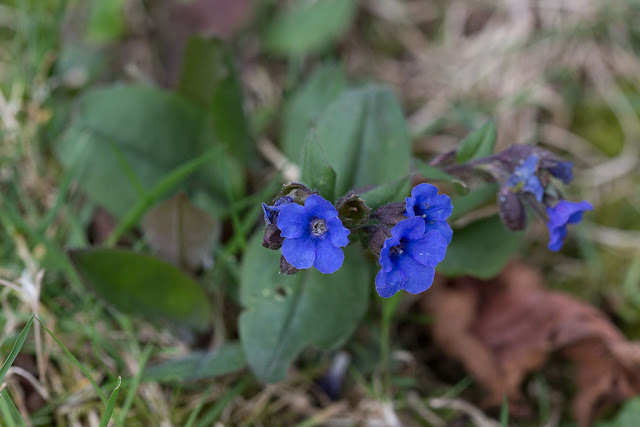 Then we went to the grocery store where, on a whim, we picked up something called Eccles cakes -- "a Lancashire tradition," according to the package. We had no idea what they were, and when we asked the cashier she didn't know either. I guess she's not from Lancashire. Turns out they're miniature pies filled with currants and raisins. We had them with our afternoon tea and they were good. I'd buy them again.

I took Olga to the cemetery, where our walk was interrupted by gathering storm clouds of such darkness and magnitude that I decided we'd better hoof it home -- and it's a good thing we did because we got thunder and hail!

Finally -- and here's the day's major achievement, saved for the end -- I filed our American income taxes. Woo hoo! It's always such a relief to get that done. This year we actually had to pay a tiny amount ($24). It's the first year we've made more than the permitted exemption for foreign income, and because we paid off Dave's student loan back in 2017 we no longer have that interest to deduct, so we basically broke even. Maybe we need to set aside even more of our money in pre-tax retirement savings to avoid that situation in the future.

We were at a party recently where some of our coworkers were all talking about their retirement plans. One guy's moving to France, another to Palm Springs. They asked us what we intended to do, and we confessed that we hadn't really considered it. They're all older than we are, but not by much, and I suppose we do need to start thinking about our options. Good Lord.
Posted by Steve Reed at 6:48 AM