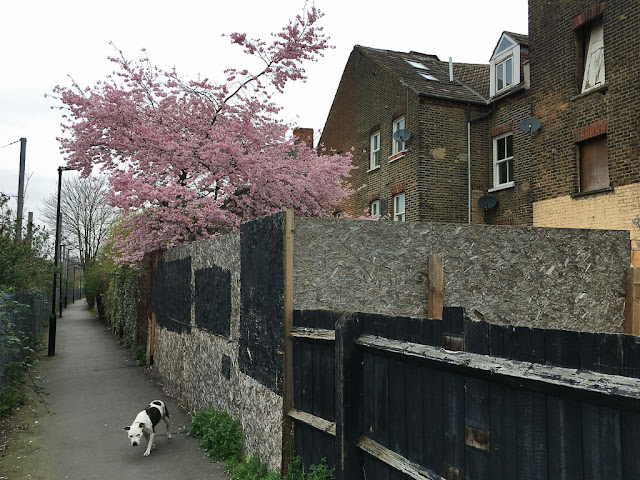 Olga and I passed this tree on Saturday morning on our walk, near the Black Path in West Hampstead. I took an iPhone picture and then went back later with my real camera. 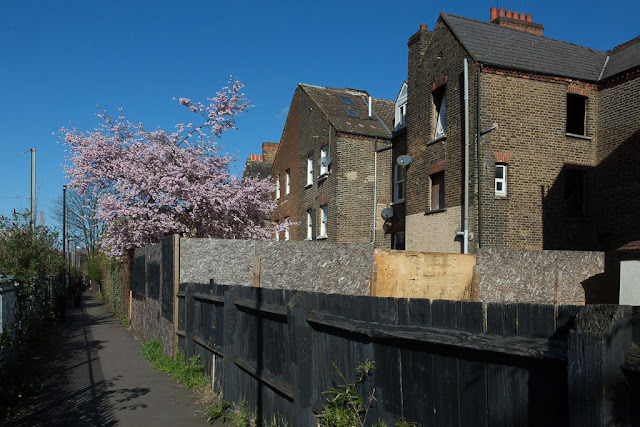 Somehow I don't like this shot as much, despite that beautiful sky. I was a bit too far away, and besides, Olga's not in it!

The house on the right is the one that collapsed a year ago during renovations. It was later revealed that the house previously had been damaged by a delivery truck, contributing to the collapse. The owners, as I understand it, are now trying to get permission to move forward with restoration.

Someone asked in a recent comment what I thought would happen with Brexit. Honestly, I have no idea. We are in limbo while the government tries to sort itself out. I would love to see a second referendum, which I think is a perfectly reasonable proposition given what voters now know about the complexity and benefits (or lack thereof) of leaving the EU. (Of course, once again, Dave and I wouldn't be able to vote, which would make me crazy. I'll wish we had moved faster on our citizenship paperwork in that case!) To be candid, though, I'm not sure another referendum is very likely.

I was talking to our Brexiteer friend Chris the other day, and he said he believes voters didn't understand how complex the process of leaving would be. (He didn't say he himself didn't understand it, but that seemed implied.) "The government has made a complete hash of it," he said. If Chris is wavering, that suggests to me that many people must be.

And then we have Trump. The Mueller report didn't reveal any intent to collude with Russia, and somehow I'm not surprised by that. Frankly, I think most of Trump's crew are too stupid to knowingly do something that calculated. I do think they blundered into a situation where they used information from Russia (via Wikileaks) to their advantage, and as reliable news outlets have continually reminded us, Mueller did not exonerate Trump of obstruction. Frankly I'd like to see the USA just move forward, hold its nose and get through the next year and a half before kicking Trump out in the next election -- but of course now Trump is promising all sorts of revenge investigations against his enemies, which will probably consume the rest of his term.

I'm just going about my daily life, trying to stay sane. So...isn't that a pretty pink tree?
Posted by Steve Reed at 6:46 AM