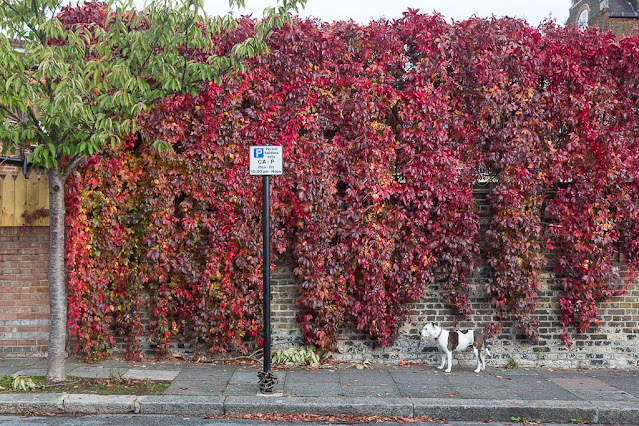 Olga and I took a long walk around the neighborhood yesterday morning, and went to check out the Virginia creeper vines on a corner not too far from our flat. I knew they'd probably be changing color by now, and sure enough, they're a wall of red. Olga dutifully posed while I took some shots.

We're seeing a few more changing leaves, too -- the trees in Fortune Green are beginning to go yellow, and the fruit tree down our street is orangey-pink. In another week or so we'll be at peak leaf time, I suspect.
Olga and I also walked through the cemetery twice yesterday, in morning and afternoon. As often as we go to the cemetery, I'm not sure I've ever been there two times in one day. It seemed like a very Halloweenish thing to do. 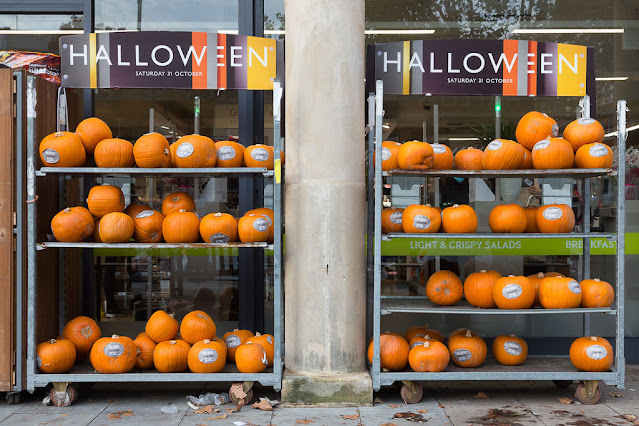 At Waitrose, there's a big display of Halloween pumpkins. I've been told that Halloween is primarily a recent American import to the UK, based (ironically) on pagan traditions that originated in the ancient British isles. But I went down an Internet rabbit hole this morning after reading this column, which makes the point that UK Halloween traditions are alive and well -- just not necessarily the cartoonish variety associated with American Halloween. In other words, we Yanks have naturally taken it to commercial extremes, buying loads of candy and inflatable decorations.
I especially enjoyed the comments below the column, where many readers related how they celebrated Halloween as children, mainly -- it seems -- in Ireland and Scotland. For example: "The US import is a recent thing. When I was growing up in Scotland, Hallowe'en followed a more traditional path. We had turnip lanterns, and went door to door 'guisin' (i.e. being in disguise). If invited in, we had to perform a party piece in return for sweets, monkey nuts, or whatever. Hallowe'en parties had the traditional games such as dookin' for apples. All the trick or treat stuff, and pumpkins, is a recent development."
("Monkey nuts" is another name for whole peanuts.)
Also, the UK has Bonfire Night (aka Guy Fawkes Night) just a few nights later, in early November, so that steals some thunder from Halloween. That's when people light bonfires and set off fireworks, while in the United States, if fires occur at all, they tend to happen on Halloween or "Mischief Night" (and tend to be illegal vandalism).
Anyway, Waitrose is sure pushing those pumpkins! I do like a good pumpkin display. It's very autumnal.
Posted by Steve Reed at 7:58 AM