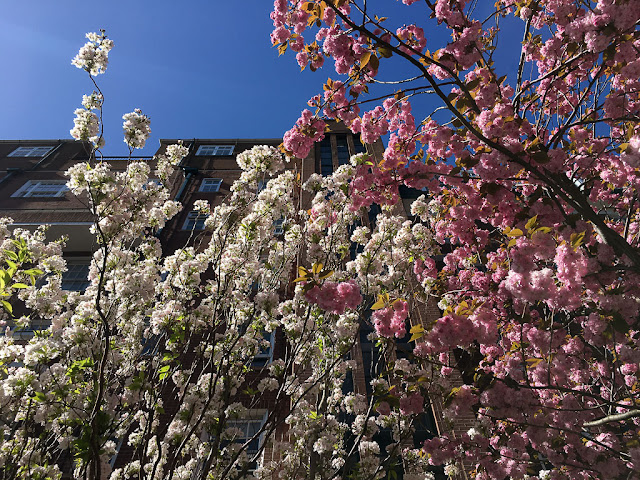 These trees are right outside the school where I work. Pretty impressive display, huh? They don't seem to be at all bothered by our chilly nights (37º F last night).

I heard back from the camera shop. They said my repairs would take 10 to 12 working days, so for a couple of weeks you're going to be getting pictures from my phone. I'm just pointing it out in case they're not up to my usual standards. I don't want you thinking, "Gee, Steve used to be such a good photographer, but now he's slipping." (Or, worse, "Steve used to be a mildly adequate photographer, but now he's really slipping.")

It's ironic, isn't it, that my camera would die mere days after I gave away my old Canon camera, which I hadn't so much as touched in a decade? But that's OK. The phone will do.

In other news,  I downloaded a list of all the e-mail subscribers to my blog, in case I do eventually adopt another subscription service. (Blogger's is going away, in case you missed their recent update.) I was astonished to find that I had something like 1,300 subscriptions! But then I started looking through them, and many were obviously the work of a spambot. The "subscribers" all had Outlook e-mail addresses and signed up at the rate of four or five a day back in 2017. I don't quite understand what anyone gains from subscribing potentially fake e-mail addresses to my blog, but the mysteries of the Internet are legion. Turns out I have about 50 legitimate subscribers, and I'm cool with that.

Remember how the maintenance man was supposed to come and take a look at our garden fence? Well, he called me from our front door on Monday morning, and of course I was at work -- somehow he'd gotten the time of our appointment wrong. (It was supposed to be that evening.) He let himself in and while he checked out the fence I talked him through the issues that next-door neighbor Mrs. Kravitz has raised. I still don't know what the landlord is going to do about that situation, but I'm staying neutral. If they want to replace the fence, fine; if not, fine.

I talked to upstairs neighbor Mrs. Russia last night, and apparently she and Mrs. Kravitz had an altercation the other day. (There is no love lost between those two, for a variety of reasons too complicated to go into now.) Mrs. K's maid (yes, she has a maid) accepted a package that was meant for Mrs. Russia. When Mrs. R went to collect it, it had been opened. Mrs. K told her they opened it by mistake because her maid doesn't speak English, and according to Mrs. R she was quite nasty and challenged Mrs. R's language ability too. Mrs. K wound up throwing the box at Mrs. R, who ordered her not to accept any more packages on her behalf. In response, Mrs. K allegedly stuck out her tongue. I am not kidding! Mrs. R was so incensed she considered calling the police, though I'm not sure what in that exchange could possibly be considered criminal.

As they used to sing on Sesame Street, "These are the people in your neighborhood..." 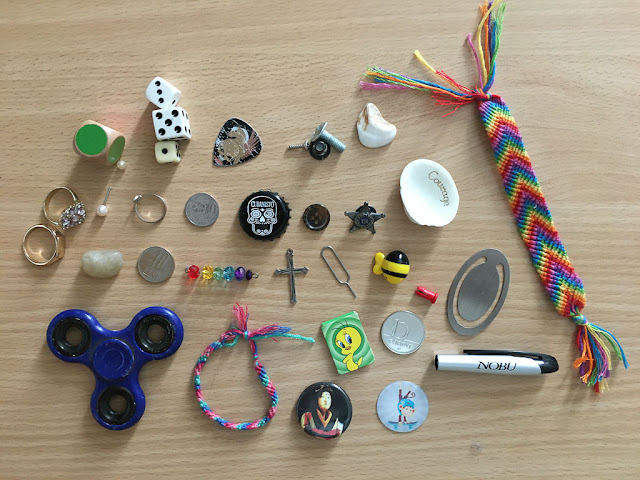 For some reason, fellow blogger Mitchell's post yesterday about items we keep reminded me of the bowl on my desk at work, where I put all the various doodads that I find in the library. It's a sort of lost & found in case anyone says, "Where's my fidget spinner?" or "Have you seen my rainbow-colored friendship bracelet?" (So far, no one has done so. The kids who lost some of that stuff have probably graduated by now.) As you can see, it contains items as diverse as a plastic bumblebee, a star-shaped Secret Service pin, a unicorn guitar pick, bits of (I assume) costume jewelry and a seashell engraved with the word "courage."

Of course, Mitchell's post was about treasured belongings; I'm not sure why it prompted me to think about junk on my desk.
Posted by Steve Reed at 6:42 AM