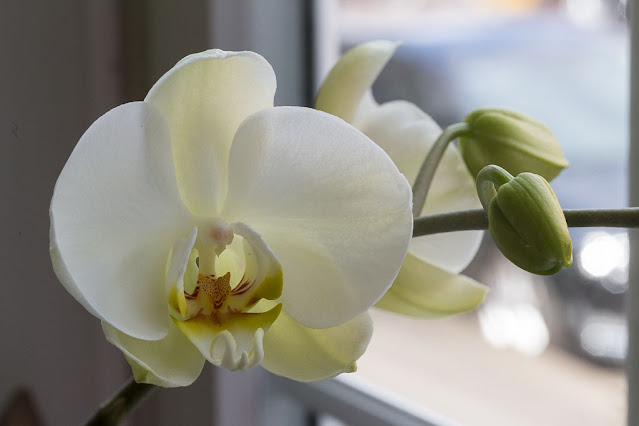 I am excited to be able to finally post a picture of this mysterious orchid, which has not bloomed in the several years we've owned it -- until now. It's a plant I rescued from someone's trash on the street, and I knew the flowers would be white because it had a wilted flower stalk attached at the time. I brought it home and repotted it, and we kept it in the living room, but it refused to bloom.

Finally, last year, I moved it to the dining room, which seems to have optimal conditions for orchids, because all the other ones bloom like crazy in there. And that did the trick. 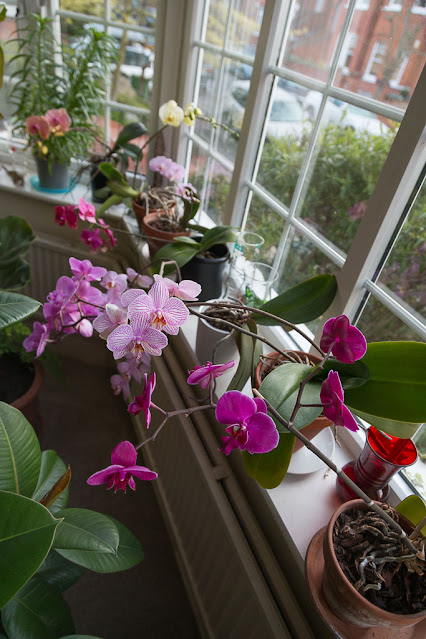 Here's the whole lineup, with all seven of them in flower. This truly is the magic orchid windowsill. I think they like it because it's east-facing and gets morning sun, but it's also partly shaded by shrubbery and it never gets too hot.

We have four more orchids in the living room, and none of them are blooming. I really need to just make space in the dining room for all of them, but then I don't know what I'd do with all the rest of the junk treasures on that windowsill. 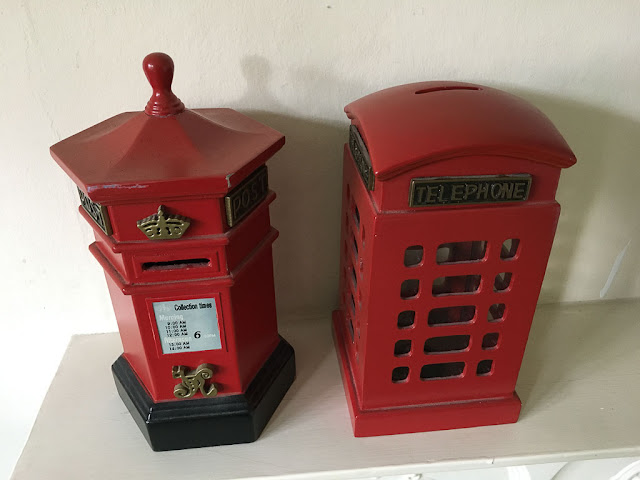 Speaking of treasures, here are my finds of the day for yesterday -- two coin banks, set out for the taking on a wall along Finchley Road. Don't you love those?! They're made of wood. I'm thinking I might give them to my nieces.

I found them while walking Olga, who was eager for an outing in the morning. But later in the day, when we went to the cemetery, she plodded along like she was dying. Moody, that girl. 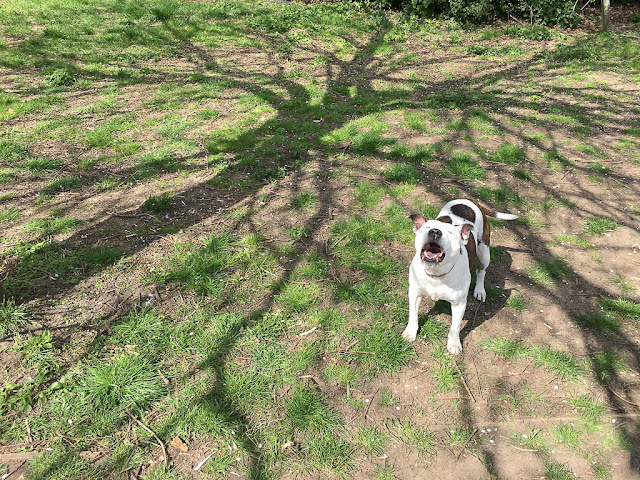 "Would you STOP TAKING PICTURES!!!"

I also finished Doctor Dolittle yesterday. Although it's a hefty book, it reads quickly and it's pretty entertaining. Definitely one of the better Newbery medalists from the 1920s, a decade of otherwise mediocre winners. I could see modern kids reading this book -- in fact, I have seen them check it out -- while I can't imagine any of them picking up "The Dark Frigate" or "Gay Neck: The Story of a Pigeon."

Back to work today. Spring Break has officially ended.
Posted by Steve Reed at 6:24 AM

Wow to those two boxes. What a find! Should you decide to put them up for sale please do give me first refusal. Which reminds me: In the nineties when they were selling off (the full size), suddenly redundant, red telephone boxes I nearly bought one for the garden. The romance of it . . .

Congratulations on your continued successes with the orchids. You clearly are a man of infinite patience - remember, patience feeds on hope, patience feeds hope. Egg chicken scenario. Since you are blessed with green fingers let's call you The Plant Whisperer.

Poor Olga. She succumbed to the law of diminishing returns (misplaced optimism). A fresh daisy in the morning turning into a wilting one in the afternoon.

The two boxes are definitely treasures, as is Olga. I love your orchids. We now have two. They sit in the living on what I hope is the magic orchid pub table.

Your orchids are definitely loving that windowsill. I have only got 4 in flower at the moment and 8 " sleepers". It is always interesting seeing what colour they are going to be when they come into bud as I don't mark them at all!
Those money boxes are real treasures.....your nieces will love them.

Back to work for me today, too. The alarm clock sounded particularly hideous this morning.

Your white orchid is beautiful!

As a kid I loved all the Doctor Dolittle books (there is a whole series) and wished I had a parrot to teach me to "talk to the animals". Fast forward fifty years and as a retirement present to myself I got an African Grey parrot who was, of course, named Polynesia. In the books she is clearly an African Grey, described as a grey bird with a red tail. She was a good pet but never taught me anything, in fact she refused to speak English. She did have a number of interesting sounds she picked up, the ping of the microwave and the squeak of my front gate. She was not a young bid when I got her and she lived for twenty more years.

The orchids are beautiful. What a great in or out of that window!
And the treasures you find; amazing.

Good about the orchid.
Another language difference noted, coin boxes against money boxes here.
How old is Olga?

Those boxes are great! I think they'll make fabulous gifts for your nieces. And your orchids are pretty amazing too!

Those boxes are very cool! The things you find are amazing. What did you wind up doing with those pipes?

Aw, that's nice, to rescue an African Gray. People might not understand that it's a lifetime commitment to own a parrot (if you can actually "own" an animal) so it's wonderful that you gave her a great retirement in your retirement.

Your orchids are beautiful. I think your nieces will love the banks. Now that's a great photo of Olga! My little Pogo did not like to pose for photos either. You have a wonderful day, hugs, Edna B.

I remember enjoying Dr. Doolittle as a child. Sometimes it saddens me when favorite stories are turned into movies, erasing the pictures I'd already created in my head of the original characters.
Those phone banks are much nicer than one a relative sent my son years ago. I think his was made of plastic or rubber.

Your orchids make me feel guilty as I have now killed every one that I had. Which was only about two but still...I need a magical windowsill. Or something.
The little phone boxes are delightful! Nice find.
I am thinking that one of these days you need to do a coffee table book of Olga pictures.

Your orchids are so beautiful. So, now I'm wondering if my one little orchid languishes all the time because I have it in the wrong window getting western sun here. I'm going to move it and see what happens.

Some plants are very choosy about light. I moved me Christmas cactus a few months ago and it really likes the new place.

That is an impressive collection of orchids. You really have a true green thumb. Those two banks are a wonderful find. I think your nieces will like them. You certainly didn't get much "spring" in your spring break.

KEEP the boxes, wow! What a great find! Orchids come and orchids go but those boxes are swoon worthy solid!!

That does sound like a more entertaining book than the other titles you mentioned. Your orchids are incredible. I don't have a spot for indoor plants, so they die. Or my cat eats the leaves which isn't good for her or the plant.

Kudos on your orchids. They are truly exotic.

I've seen several of those phone boxes in gardens or at pubs, and I always think how cool it would be to own one! In some areas of London they've been turned into planters, which is an interesting idea.

Fingers crossed! There's still a bit of trial and error for me in figuring out what makes them happy.

We don't mark ours either, though I usually remember more or less what color any given plant is going to be. We have two, recently rescued from school, that I've never seen bloom -- I don't think they'll flower this year, but next year hopefully I'll have an update!

Back to the grind! I'm kind of enjoying it, though -- the return to routine.

That's awesome, that you adopted your own "Polynesia" and gave her such a good home. I too assumed from the descriptions in the book that she was an African Grey.

It's incredible what people throw away!

Actually, I'd call them coin banks or just banks. Linguistic variations are interesting!

They seem to be living their best lives! LOL

I still have them. The museum hasn't written me back so I'm just sitting on them for now. I'm thinking I might put them on eBay but the shipping costs might be daunting.

I think dogs really do get frustrated with picture-taking. They know it's an activity that involves them, but they don't understand it and they're confused!

I've never seen any of the Dolittle movies, but I agree -- sometimes it's better to just enjoy the books.

I've thought about it, but there are new pictures every day and a book is so finite! Maybe as a memorial project when the time comes.

Could be! I don't think they want to be too hot. They usually live under tree cover, protected from direct sun.

Yeah, it's interesting how much of a difference light can make.

They were a great find, I agree. I couldn't believe someone would give them away. At least they didn't just put them in the trash.

Ha! As long as it's not a poisonous plant it probably won't hurt the cat. I think animals need a little greenery now and then!

I never thought I would be able to grow an orchid, so this has been a nice surprise!

When we bought our house in San Diego, the previous owners had an original London phone box in their living room. I would have loved to have kept it (not in the living room, however).