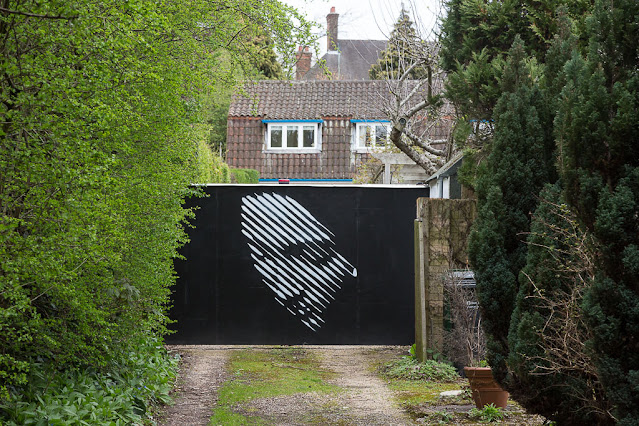 This gate or garage door or whatever faces out toward Finchley Road and was recently repainted. It used to look like this.

I had astonishingly bad timing in choosing yesterday to make silly references to the Queen. Of course I had no idea about Prince Philip when I published that post, but oh well. I can't say I feel any sadness about his death -- he was, after all, 99 years old and led a longer and more interesting life than most of us could hope for. It was kind of refreshing to have someone so ornery and occasionally unpredictable in the monarchy, I'll give him that. I wish he'd made it to 100. It seems a shame to get to 99 and not cross the century line.

Some of the TV channels were "all Prince Philip all the time" yesterday and you could tell they'd been preparing for this event for years. As I told Dave, all those news directors and editors are probably relieved they can finally run those stories they've had stacked up and waiting. (I'm thinking like a journalist here.)

I stayed home yesterday and read my newest book, "The Voyages of Doctor Dolittle," which won the second Newbery Medal back in 1923. I've never read it -- in fact I never saw the movies either, though I know some of the songs from the '60s film because a friend had the record when I was a kid. I was horrified to realize the book is 440 pages long! It goes pretty quickly, but it needs an editor.

Later, I had to go to the Royal Free Hospital for a routine blood test. When I made the appointment online yesterday morning, I was given several options for Friday afternoon, so I grabbed the earliest one at 5:10 p.m. Only after arriving at the hospital did I realize my appointment was actually for Friday, April 23! Bloody hell! Fortunately they squeezed me in.

On the way home, I was stopped on a street in Hampstead by a somewhat shabbily dressed older man wearing a single brown work glove, a la Michael Jackson. "In that garden across the road," he said, pointing, "a pack of snails attacked a tortoise!" I laughed, thinking what the hell is up with this guy, and started to walk away, but he stopped me and proceeded to tell a joke that seemed to last for five hours. I only understood about a third of it, but the punchline was that the tortoise was suffering from shellshock. I laughed again (and escaped successfully), but I must admit I smiled all the way home at the sheer weirdness of the encounter. Maybe he saw me carrying "Doctor Dolittle" and assumed I'd appreciate an animal story.

And as I sat here writing this post, a fox came right up to the back door, sniffed the doorframe and looked inside! "If I could talk to the animals..."
Posted by Steve Reed at 6:46 AM