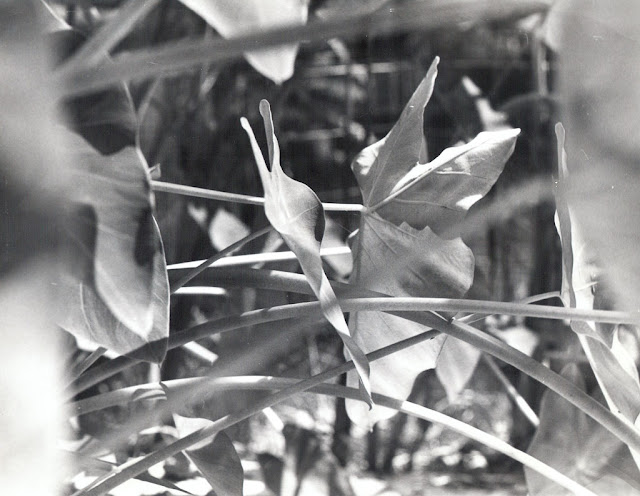 Today's photos are a blast from the past -- I took them back in 1978 or so, using my dad's camera. I know I've written about this before, but he's the one who introduced me to photography and we occasionally went out in the yard with his Minolta and took pictures. On this particular day, I believe, we took a whole roll of film, including shots of his geese and a mushroom and some other stuff, but these are the only two shots I still have and as far as I know the only ones that still exist. The negatives vanished years ago.

I never had these negatives -- my dad kept them, and I remember seeing them in his darkroom at some point, but after he died I tried to find them and had no luck. Over the years, in fits of cleaning, I've thrown away other negatives from various photo projects, and without fail I now wish I hadn't. Negatives don't take up much room, after all.

For years I kept negatives from a photo class I took in the 8th grade, as well as negatives from college that I took on an outing to Caladesi Island for the school paper, and a photo walk I took in downtown Tampa in the mid-'80s. I threw all of them out about 20 years ago. I could kick myself for it now. I mean, I don't think any of the images were prize winners, but I'd love to see them again (and maybe blog them!). 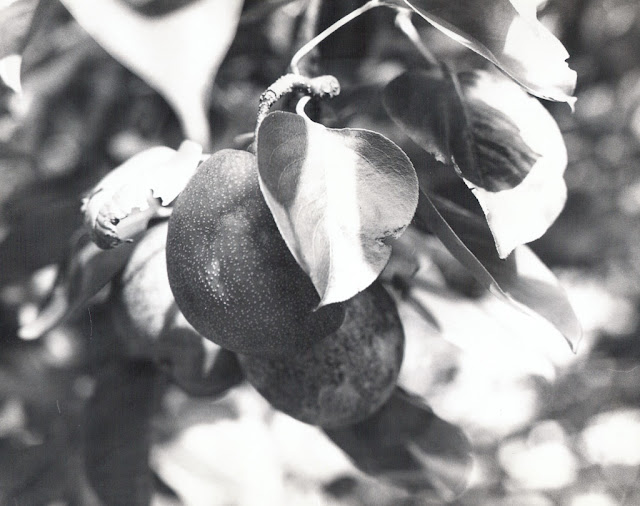 These are pears in my dad's yard. When he first bought his property north of Tampa, it included some fruit trees that had been planted by the previous owner. I don't think we ever ate these pears, at least not that I remember. Up top, those are elephant ears, a type of taro that was introduced to peninsular Florida and, like so many exotic species, now runs amok there.

Anyway, there's not much interesting going on around here. I had a super-busy day yesterday. I realized with horror a few days ago that the library was WAY behind on collecting long-overdue materials -- when I ran a report listing books overdue more than a month, it came to 18 pages! With only about six weeks left in the school year! Gasp!

So I spent the last two days, pretty much every spare moment, churning out personalized e-mails to the parents of all the offending students -- about 50 altogether. Hopefully this week we'll see some of that backlog cleared up.

I guess just as I've let slip the task of writing to parents, the kids have let slip their obligation to return books. With our crazy school year -- lockdowns, weeks of distance learning, that kind of thing -- it's no wonder they've lost track of stuff. I always try to get all books back or accounts settled by the end of the school year, but this year, that might be optimistic.
Posted by Steve Reed at 6:04 AM