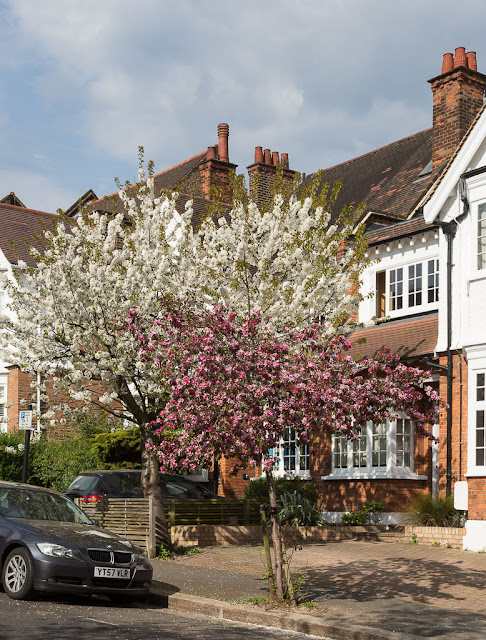 Here are some spring trees on our street. Aren't they beautiful? In fact, the pink one in front is the once-viney tree -- but don't get too excited because, yes, you've seen this picture before. It was taken one year ago, last April, and I blogged it then.

Here's the same view this year: 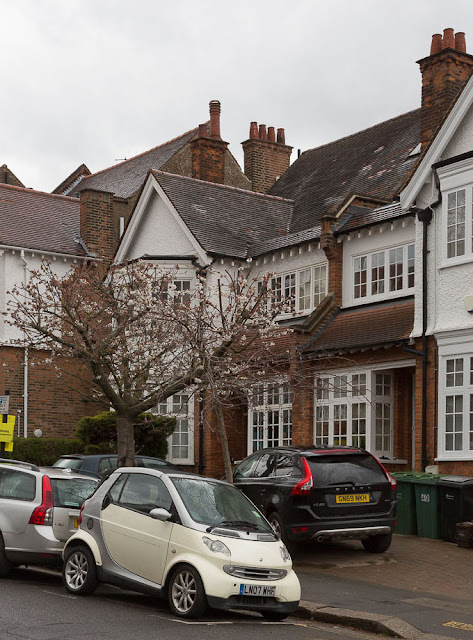 It's as if spring hasn't even happened. Or, it kind of happened, around the end of February when we had a burst of warmth, but then everything went refrigerator and now, as I type this, it's 34º F outside. That's 1º for you Celsius people.

Moaning about the weather makes for a boring blog post, but I just can't get past how enduringly cold it is. It's as if the pause button has been pressed on all our gardening. I was talking to a co-worker who said her seedlings, in her greenhouse, aren't growing at all, and we're in the same boat. Our seedlings have sprouted, but that's it. Nature has withheld the warm embrace they need to grow.

On Monday it's supposed to become slightly milder -- around 60º F (16º C) during the day, and low 40s at night. After that I think we might, might be done with nighttime temperatures in the 30s. Fingers crossed, because I am over it.

I'm happy that our shops have begun to open, though. I cleaned some stuff out during our lockdown and then was unable to donate any of it to charity -- I just stacked it in a closet. Yesterday, FINALLY, I took two bags of books to the Oxfam used book shop, and three bags of clothes and other stuff to the charity shop. It feels so good to get that debris out of here.

I've also given away some items at work -- like the blue teapot. I've found that if I put stuff in the faculty/staff lounge with a "FREE" sign on it, it disappears in no time!

Dave and I are still watching "The Walking Dead," but the show has taken an incredibly dark turn and I'm not sure I like it. For those of you familiar with it, we're at the start of Season 7 and Negan has just appeared. I don't mind zombie-killing, because that's like cartoon violence, but now there's a level of human-on-human brutality that's hard to tolerate.

We have "The Walking Dead" graphic novels in our library at school, and we don't check them out to anyone younger than 8th grade. Younger kids sometimes argue that they've watched it on TV so they won't be bothered by the books, and I am horrified at the possibility that young children have seen this show! Even I have trouble processing some of the violence.

Dave and I have both agreed that in a zombie apocalypse, we'd rather just be dead. Or undead, as the case may be.
Posted by Steve Reed at 6:40 AM