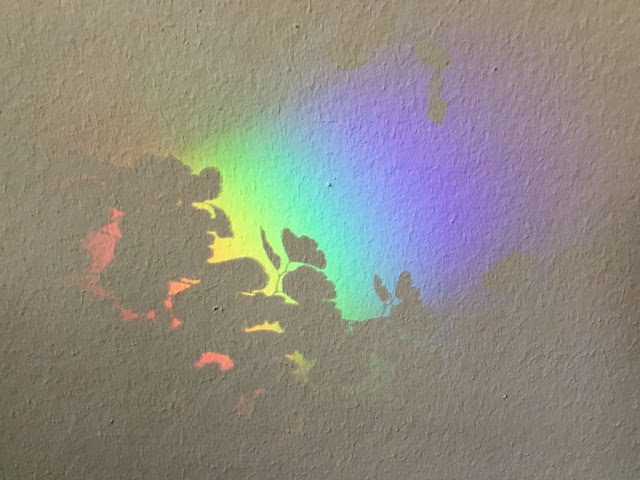 We're at the time of year when the glass prisms in the living room throw little rainbows on the walls. This one caught my eye, making feathery shadows as it passed through our maidenhair fern.

I totally forgot about the Oscars when I wrote yesterday's post. Not that I have much to say. I haven't seen any of the movies, although I am eager to see "Nomadland" when it finally becomes available here. (Apparently we'll have to stream it on Disney Plus.) Cinemas in England are all still closed, but can reopen on May 17.

This is undoubtedly the most disconnected I've felt from any Oscars ceremony in my lifetime. Partly, it's age -- I just don't keep up with movies as fervently as I used to. But it's also hard to get excited about films when you're not able to see one! The only nominated film I've seen is "Hillbilly Elegy," on Netflix.

Yesterday was crazy busy at work -- lots of re-shelving, book deliveries and other routine stuff. And then, because I hadn't run around enough all day, I went to Homebase after work to buy compost, and wound up with two gargantuan bags -- 120 litres each! They were so big I had to call a taxi to bring me home. It made me realize I haven't ridden in a car in ages. It felt very luxurious. Imagine! Hopping in a little metal box with soft seats and being taken anywhere you want! What will humans think of next? 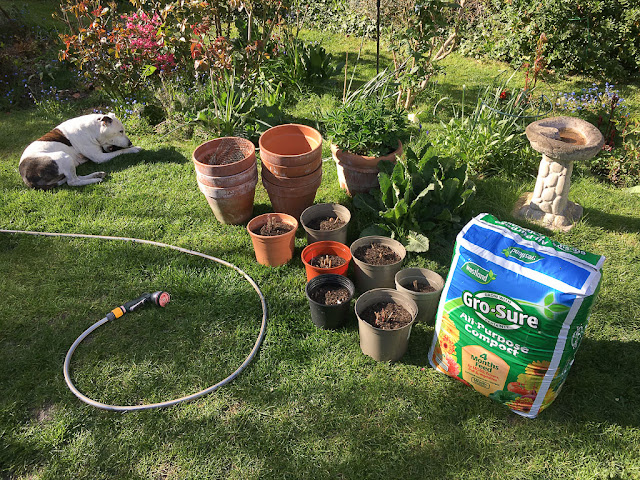 This is why I needed the compost. It's dahlia time again! I brought them all out of their winter slumber in our shed and potted them up. Some of them had tiny sprouts and root systems, even though they were sitting in utterly dry compost. Durable little devils.

How did I get seven dahlias?

Here they are installed in their new homes. We have to keep them in pots because otherwise they're slug chow. 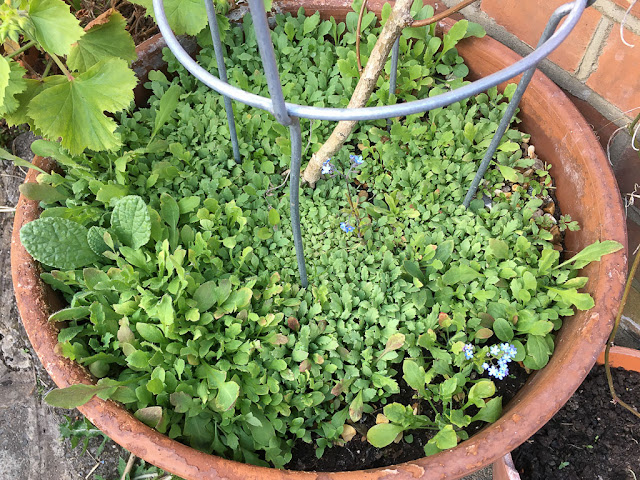 I also have a little problem with the poppy seedlings in a pot on the patio. I sprinkled seeds there a few months ago but I didn't realize I'd planted them that thickly! I'm going to have to do some thinning. I don't think poppies like being transplanted, unfortunately, so I'll just have to pull them. There's also a borage plant, some forget-me-nots and a few corncockles in that pot -- in addition to the passion flower vine that is its main occupant.

Finally, I realized yesterday that I took so many pictures of Olga at the cemetery on Sunday that I could make a little animated GIF with them:

I shot a lot of frames because I was trying to catch her in mid-bark. But now, watching this, I'm thinking I should have just made a video!
Posted by Steve Reed at 6:27 AM