Flying Back in Time 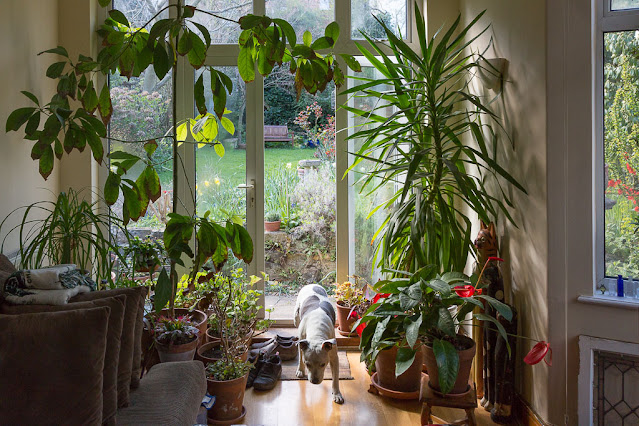 I just woke up and still feel a bit muddle-headed. Do you ever wake up early, and think to yourself, "I could get up now, but what's the hurry?" Well, that was me this morning at 5 a.m. (more or less my normal wake-up time). I wound up falling asleep for another hour and a half, and that second period of sleep was fantastic. I think I've read that's when we all do our best sleeping -- right before we wake up. It's certainly when the weirdest dreams seem to occur, or at least the ones we remember, though none stuck with me this morning.

As you can see, it's looking a bit crowded around our back door, with all the geraniums and a few other odd plants tucked inside. I don't think it got as cold last night as initially predicted -- when I woke up the first time my phone said it was 34º F (1º C) and I don't see any evidence of frost. Tonight, though, is supposed to be colder -- a predicted 30º F (-1º C) by tomorrow morning.

We even had a bit of snow yesterday -- more than flurries, but nothing that stuck. It doesn't feel that cold, though, because the sun is still springtime-bright.

Olga and I went to the cemetery for our usual walk. I noticed not too long ago that there seems to be a fair amount of random trash lying around there, so I've taken to bringing a small trash bag with me and filling it up with all the bits of broken plastic flowerpots and empty bottles and crisp packets and whatever else I find while walking the cemetery paths. I've filled two bags so far. Very David Sedaris, right? 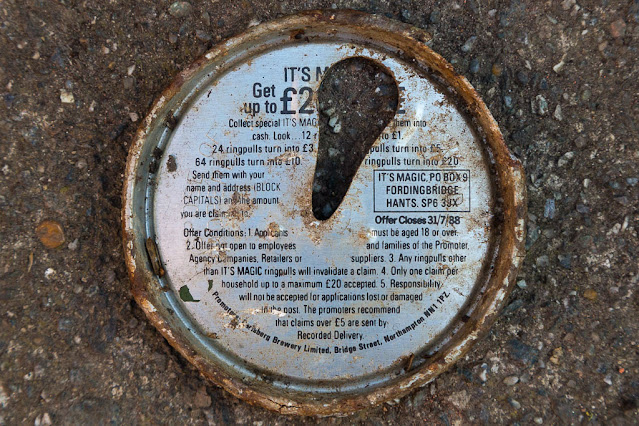 Some of the trash has clearly been lying around a while. This lid from a can of Carlsberg beer touts a promotion called "It's Magic" that allowed people to redeem aluminum pull tabs for money. The offer ended on July 31, 1988. I was still in college! 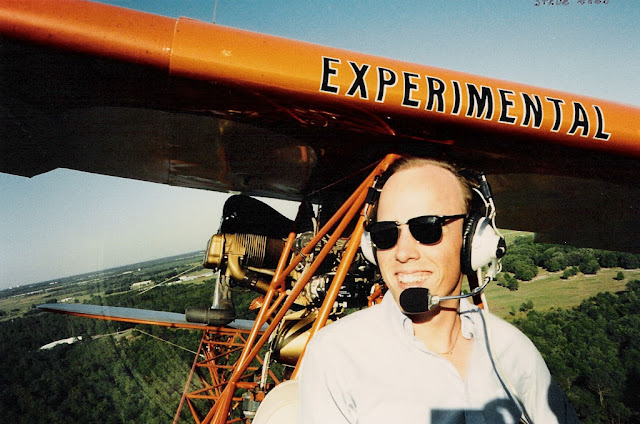 In fact, just for the fun of it, here's a photo of me from late spring 1988. Yes, I am in mid-air. I was a 21-year-old reporting intern in Lakeland, Fla., covering an annual gathering of experimental aircraft enthusiasts, and one of them offered to take me up in his flying contraption. I'm not sure I adequately considered the possibility that I might die, but I do remember being happy when we landed. To make things even crazier, the pilot took the picture, holding up a camera and pointing it back toward me while flying the plane!

That wasn't even my scariest flying experience as a reporter. I once wrote about a group of pilots who flew ill people to medical appointments for free, and I accompanied a pilot and a woman getting cancer treatments on a flight to Jacksonville. As we were preparing to land (at night), we were struck by the most intense thunderstorm I've ever experienced -- or so it seemed from the back seat of that tiny Cessna or whatever it was. The wind rocked our little tin can and the rain came down so hard we couldn't speak or see a thing out the windows. I remember just breathing deeply and telling myself, "This guy is a trained pilot, and he knows what he's doing." Somehow he got us down and afterwards, when I told him I wasn't frightened, he said, "Well, I'm glad you weren't, because I was!"

The woman with cancer, meanwhile, was very sanguine about the whole thing. I suppose when you're fighting cancer a potential plane crash seems like a walk in the park.

Anyway, I didn't intend to embark on a journey down memory lane, but that's all much more interesting than anything that happened around here yesterday. Dave and I watched three episodes of "The Walking Dead" last night -- we're into season six, and we're loving the show. It's very binge-worthy.
Posted by Steve Reed at 7:56 AM