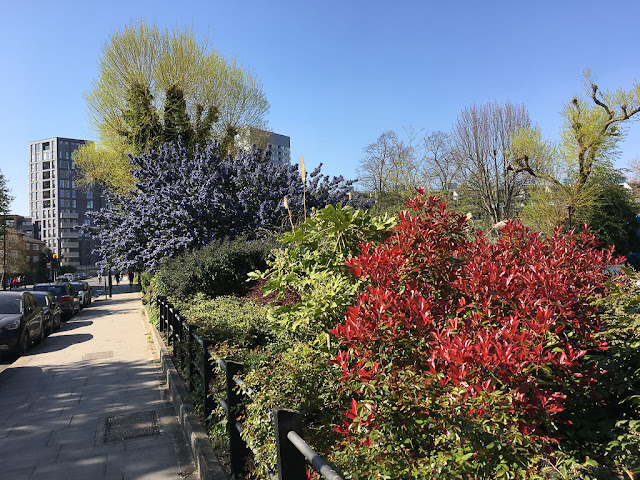 This is part of my walk home, along the same Abbey Road made famous by the Beatles. These plantings are at the edge of a housing estate with some interesting modernist architecture, though you can't see it in this photo. That red plant is Photinia, as reader Frances helpfully informed me, and the blue one in back is Ceanothus, or California lilac.

As you can see, we're still having beautiful (but cool) weather. I didn't get to sample it yesterday because not only was I at work, I was having a crazy day. Nothing worth writing about -- just lots of tykes needing books.

Oh, and congrats to Mr. Pudding, who was the first person to correctly name yesterday's mystery object. It's a silicone cell phone mount for a bicycle, so you can attach your phone to your handlebars and be distracted while you ride around. As I said, I initially had no idea what it was, and the only way I found out was to upload the photo into Google. (Did you do that too, Mr. P?) 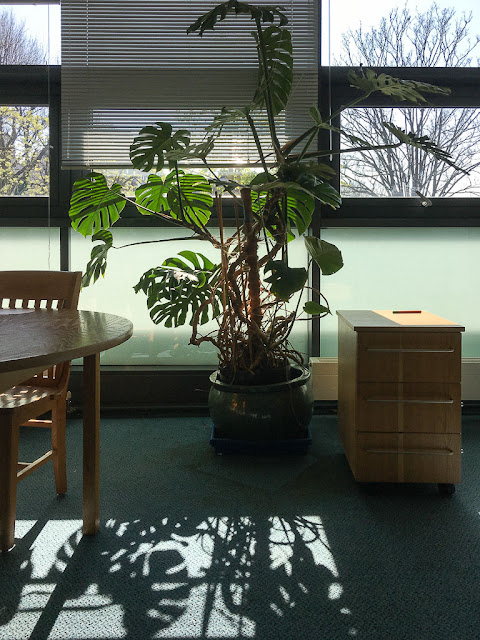 This plant in the library is known as a Monstera, which I think is a terrific name. It is, in fact, a fairly monstrous plant. This one -- which has been there for at least the eight years I've worked at the school, and probably much longer -- was once so big that the maintenance workers had to trim it. I intentionally shot the photo into the sun so you get the groovy shadow pattern on the floor, which looks like a tropical print fabric.

Oh, and RIP Walter Mondale, who was the first presidential candidate I ever voted for, back in 1984. Not a very auspicious beginning, but one that would accurately predict my ability to choose winning candidates in coming years. Clinton and Obama (and now Biden) are the only presidents who won with my vote.
Posted by Steve Reed at 6:33 AM