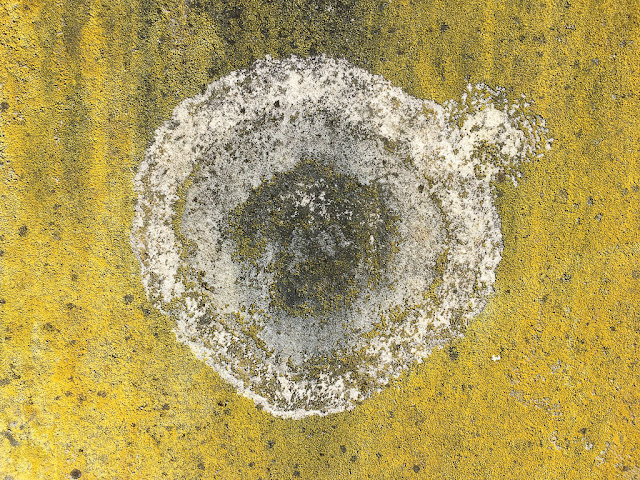 This is a rather dramatic growth of lichen on a tombstone at the cemetery. Did you know that British cemeteries (and probably those elsewhere too) are valuable habitats for lichen? It makes sense -- they offer a variety of stone surfaces which then sit exposed for, in some cases, hundreds of years. There's even a page on the web site of the British Lichen Society devoted to lichen conservation in churchyards.

This example is kind of unusual because lichen often form an irregular patch or circular spot on the stone -- but in this case, the circle appears devoid of lichen, which is growing everywhere else as a sort of backdrop. I even tried to figure out what kind it is -- I think it's a variety of Caloplaca, but I am no expert and that's definitely just a guess.

You didn't know you were here for a biology lesson, did you? And from a completely unqualified teacher! 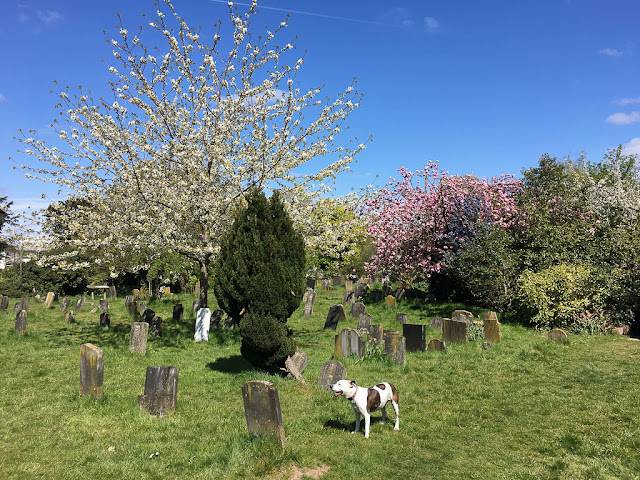 It was another spectacular but chilly day yesterday, and you can guess from the lichen photo where Olga and I took our walk. The blooming trees are really out in force.

With the exception, I must sadly note, of the once-viney tree. I was so happy to see it sprouting new leaves a couple of weeks ago, but sprout is all it's done. The tree is still mostly sticks, the leaves tiny, the buds unopened. All its identical crabapple siblings are leafing out and blooming like mad. I am once again convinced it's dying. I have no idea why, and I've hauled a couple gallons of water to it here and there, hoping to pull it through whatever crisis it's having.

Honestly, it's ridiculous that I've metaphorically wrapped myself around this tree. It's not even mine, but having removed that gigantic vine I now feel responsible for it. Could the shock of being exposed to the elements on the street really be killing the tree? Is that possible? I never imagined it would do anything but flourish.

This definitely falls into the "no good deed goes unpunished" category.

Also yesterday, I went through my old newspaper clippings and culled about 2/3 of them. You know what's interesting? The serious news stories I wrote as a reporter -- the investigative projects, the news of criminal conspiracies, car crashes, murders, government processes -- are all far less interesting and memorable to me than the lighter feature stories. The lost dog found many miles from home; the police officer accused of driving carelessly and running over the mayor's cat; the woman who won a needlework competition; the baby named after a gas station; the woman who taught African dance in schools; the firefighter who got a dalmatian as a mascot for the fire house. Those are the stories I remember. I always liked feature writing better than so-called "hard news."

I saved some of the serious stuff too, the prize-winners or things that took a lot of work. But getting rid of the rest has opened up a lot more room in the file box!
Posted by Steve Reed at 6:43 AM