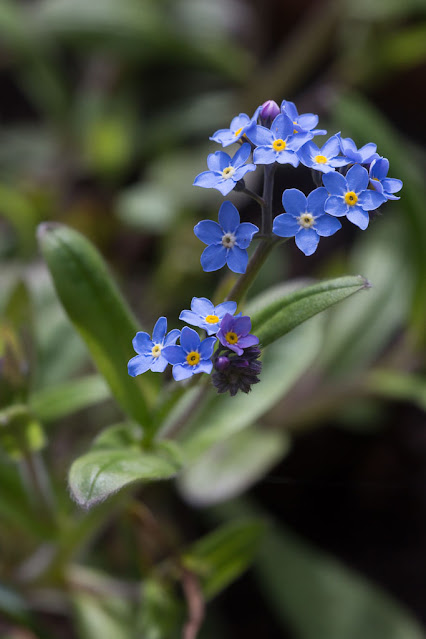 The forget-me-nots are blooming once again around the patio and underneath the roses. This particular plant grew of its own accord in the pot that contained last year's daisies and the crown imperial fritillaria; when I realized those other two plants hadn't survived the winter, I moved the forget-me-nots to a smaller pot of their own. 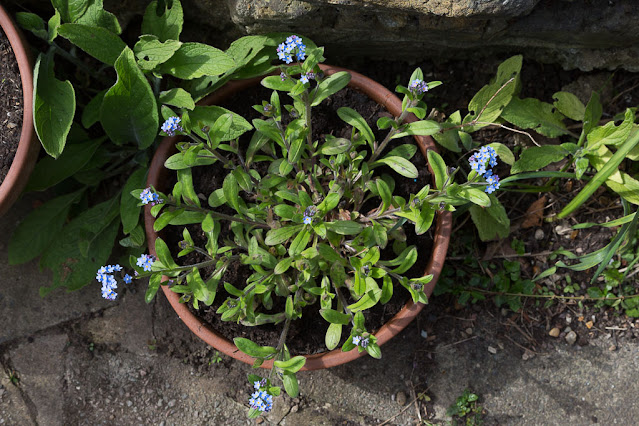 I wasn't sure they'd take to being moved, but they didn't seem to mind at all. Forget-me-nots are very forgiving.

After my post yesterday, I went out and unlocked the roofers' ladder from the pipe at the side of the house. I decided I didn't want to risk someone damaging the pipe in an effort to carry off the ladder. (A thought that several of you apparently had as well, based on your comments!) It's still locked, in accordance with Mrs. Russia's wishes, but only to itself, so that it can't be extended.

So -- it's Easter. I would be much more excited about this fact if a) I were religious, and b) we weren't going to have deep-freezing weather beginning tomorrow. Easter always seemed hugely significant when I was a child, with church and dressing up and a special dinner and of course Easter baskets, which my mom always provided. One year, as a special treat, she included in our baskets little stuffed pigs that were meant to be bath toys, and my brother and I loved those pigs. We named them Bubble and Burble, and we never used them for bathing. We kept them for years. My brother still has his, even though it has lost all its formerly light-blue fabric skin and now lives in a Ziploc bag to keep its innards together. 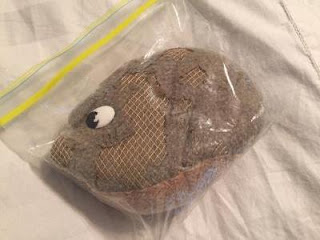 He sent me that picture a couple of years ago. I suppose poor Bubble looks even worse by now, if he still exists.

The pigs stand out in my memory because generally, Mom was sort of a no-frills parent. When we lost a tooth, for example, we'd put it under our pillow and wait for the tooth fairy -- who sometimes took days to arrive. Mom, no doubt exhausted at the end of her workday, would forget to remove the tooth and slip us a quarter or a dollar, however much we were supposed to get. We'd wake up moneyless in the morning and the tooth would still be somewhere in our bed, dry and crusty and brown, and we'd complain, and mom would joke about our "indolent tooth fairy." We'd try again the next night and eventually she'd remember to make the exchange. The indolent tooth fairy became a family legend.

One year, when I was very small and my parents were still married, I saw my father tiptoe into my room at night with my Easter basket, trying to perpetuate the myth of the Easter Bunny. When he realized I was still awake, he whispered, "Look what I found!" Quick thinking, Dad. Cover those tracks.

Anyway, nowadays Easter is barely on my radar, and as I said, I'm preoccupied with the weather. Today we'll bring in all the geraniums and the cannas and other tender plants that I thought were finally going to be able to live outdoors for the rest of the year. I'm tempted to shelter even some plants that I'd normally leave out, like the lupines, because they have a lot of tender new growth. Everything in the ground will just have to fend for itself. 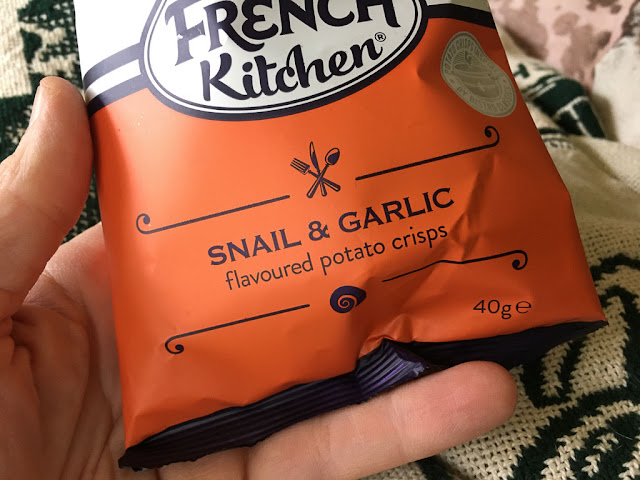 This was a packet of potato chips that came in my gin-of-the-month club box. (My adult Easter basket!) I was kind of horrified until I remembered that escargot, once you get past the butter and garlic, taste like nothing. And indeed that's the secret of these chips. They taste like butter and garlic, and they contain no snail. I'm not sure how popular they'll be in the marketplace, though.