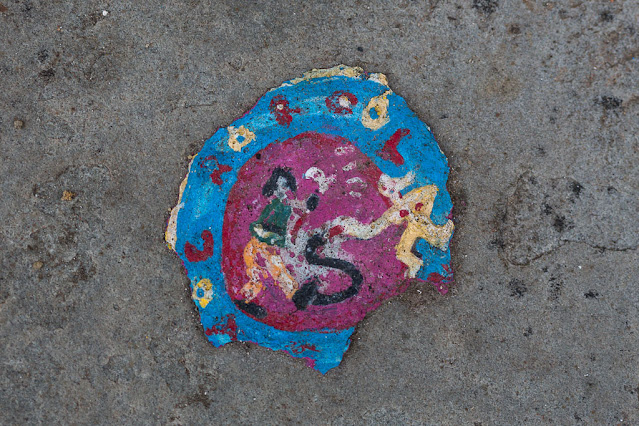 I found this piece of Ben Wilson's chewing gum art in Hampstead over the weekend. I can't quite figure out what's going on there -- it looks like a woman attacking someone with a vacuum cleaner?! Surely that can't be right.

It was supposed to freeze on Sunday evening, and I went out just before bed and covered the banana tree. (Over Dave's protestations -- "It'll be fine," he insisted.) And sure enough, when I woke up Monday morning, there was no frost and the bird bath was entirely liquid. (We did have snow flurries, though.) Last night, with more freezing temperatures predicted, I didn't bother with the banana -- and this morning there's ice on the birdbath and frost on the lawn, and my phone says it's 30º F (-1º C). 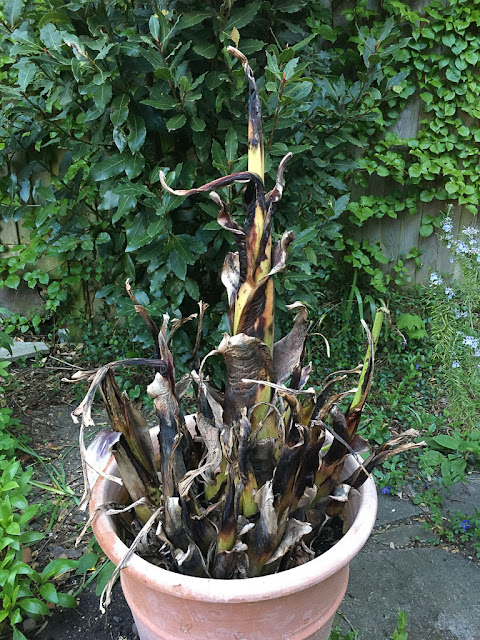 I think Dave's right, though -- the banana will be fine. It looks like it's been through a World War, but I imagine when spring really does finally get here it will recover.

You may have read that our lockdown began easing yesterday. The government allowed non-essential retail and some services, like hairdressers, to reopen, as well as restaurants and pubs with outdoor seating. Dave, who has been grumbling about his long hair for months, had an appointment with his barber right after school and came home well-shorn and much happier. It's been interesting to watch everyone walk around with early-'70s hair, but I guess we will all tonsorially modernize now.

I was surprised to read yesterday that we in the UK have "lived under the most strenuous level of government restrictions for the longest period of time in the world," according to The New York Times. I mean, I know our three lockdowns have cumulatively lasted for what seems like forever, but I didn't realize we were so different from what other countries were doing. And yet we still had relatively high death rates, at least until vaccinations came along. Go figure.

I don't even remember what it's like to walk into a department store or go to a pub. Part of me wonders why I would ever do that, when I could just come home and order from Amazon and have a glass of wine on the couch. It's all part of re-acclimating to social situations, I suppose.

Dave and I just finished Season Six of "The Walking Dead." We've taken to watching several of our shows with the closed captioning on, because the dialogue can be hard to hear -- and this cracks me up because my dad and stepmother used to do the same thing and I always wondered why. Now I get it! Anyway, in "The Walking Dead," whenever a character stabs a zombie in the head (which is how you have to kill zombies, just FYI), the closed captioning reads, "flesh squelching." It intrigues me from a linguistic point of view. I associate "squelch" with radio transmissions -- a setting on receivers that allows us to adjust reception. But apparently it also means "a soft sucking sound made when pressure is applied to liquid or mud."