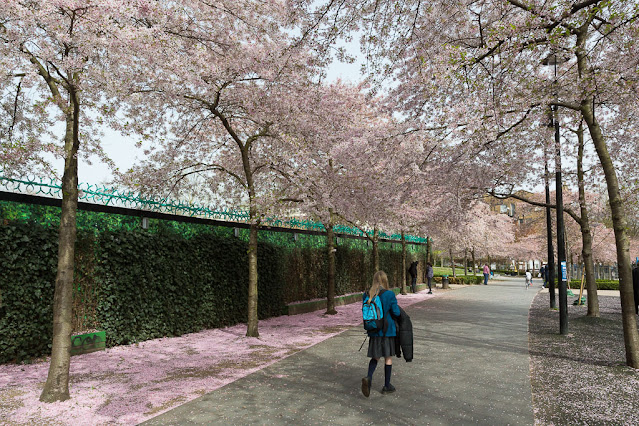 By the time I finally went to see this grove of blossoming trees at a park in Swiss Cottage on Thursday, they were a little past their peak. But it was still a beautiful scene, with pink petals dusting the ground.

That turned out to be a crazy workday. Not only was it busy, but I wore my dog-walking shoes to work by mistake (again), and though I am hardly a fashion plate I was self-conscious all day because they do look terrible -- crusty and brown with a film of dried mud. When I showed my boss, she laughed and said, "Wow, they're even worse than usual!"

And then I managed to injure myself with, of all things, a thumbtack. In my defense, it was the tack's fault. I was pushing it into a bulletin board when the plastic head of the tack split, and the metal post jammed into my thumb. I didn't know such a thing was possible. We are still not amused.

Anyway, I'm talking about Thursday because yesterday was so boring. I basically sat on the couch and read all day. I took the dog to the cemetery, where we saw this: 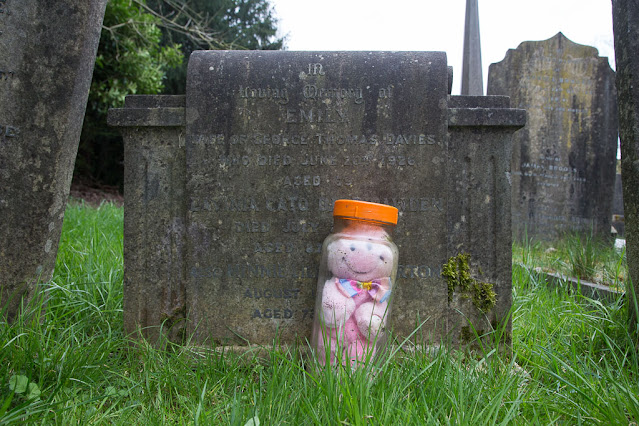 People leave the strangest things on graves, don't they? This is the grave of three older women, who all died about 100 years ago. Do they want a pink stuffed animal in a jar? I don't know. Maybe they do. 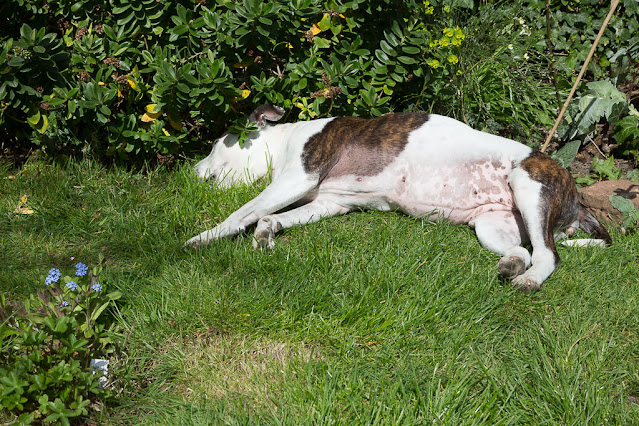 Then we came home and Olga went out into the garden to catch some rays. It was too bright out for her face, but she solved that problem.

We have the weirdest situation with some of the tradespeople who recently visited our house. The electrician who repaired (or did something to) our fuse box about ten days ago left behind a power drill, and later texted me to say he knew he'd forgotten it and he'd return and collect it. But he hasn't yet. I finally put it in the recently cleaned out closet beneath the stairs, where it can stay forever as far as I'm concerned.

Likewise, the roofers who erected the scaffold left behind a big aluminum ladder, a hammer and some roofing supplies. This is an even weirder situation. Our upstairs neighbor Mrs. Russia, who hired the roofing crew, had asked them to take their stuff away, and I left the garden gate unlocked for several days so they could collect it. But they never came, and finally I told her I had to start locking the gate for security reasons. She then came over on Thursday with a bike lock and said she wanted to lock up the ladder, so they couldn't use it if they tried to remove it without speaking to us. (In other words, I suppose, if they break into the garden.) She locked it to a pipe at the side of the house. She said they're very strange roofers and she doesn't trust them. Apparently she had some kind of dispute with them over the scope of the roofing job and the bill. God only knows who she hired, and now we're holding their stuff hostage. I'm not sure I have the full story. Do I need to worry about the Russian mafia?

So as to not end on that forbidding note... 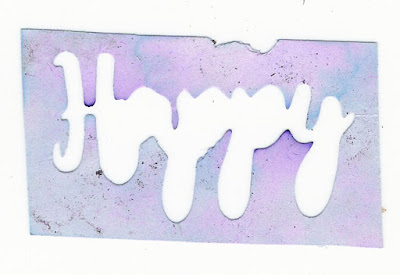 ...here's a happy piece of debris I found on the sidewalk.
Posted by Steve Reed at 7:08 AM