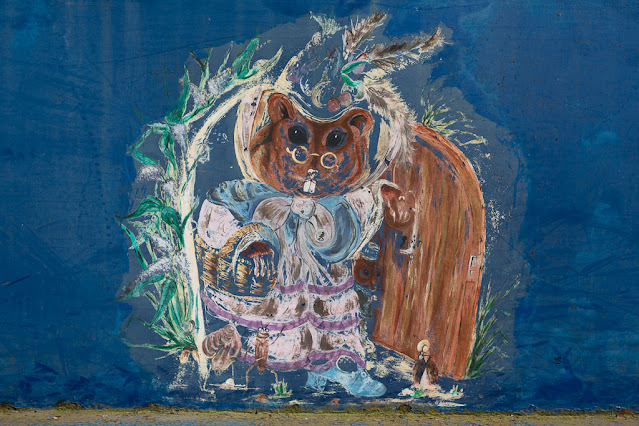 I found this rather weathered painting on the side of a canal boat on Saturday. I think it's a...beaver? In a dress? With spectacles? Maybe it's a Beatrix Potter character I'm not aware of. She seems to be opening the door and greeting some insects.

Yesterday at work, I began our springtime library inventory, which I love to do each year. Basically it means hiding out in the stacks and scanning every single book to determine whether any have gone missing. It's meditative -- I eventually hit a rhythm with the scanner and I can just let my mind wander.

Then, in the afternoon, I took my poor ailing camera to a Canon repair place down in Vauxhall. I'm so glad to finally be getting it serviced. There's been a piece of fuzz or hair in it for years that shows up on my pictures, and I can't for the life of me figure out where in the camera that fuzz is. I usually just edit the photos to remove it, but that's a pain. You can see it in this image, and also here, crossing the upper right corner of the frame.

Anyway, when I told the guy at the camera shop about it he used a magnifying device with a light and peered into the camera body and said, "Oh, yeah, there are several fibers in there, actually." (Probably Olga fur!) They're also going to fix the lens so I don't get that problem with the contact points that I mentioned on Sunday. It's going to cost a couple hundred pounds, but considering I haven't had the camera serviced at all since I bought it in 2012, and I've used it practically every day, that's not so bad.

What made this little errand so momentous is that it required me to ride the tube, which I've done only two or three times since Spring 2020. And it was the first time I've been south of the river since our initial lockdown began more than a year ago.

To make it even more momentous, I happened to ride down with a colleague from work who lives near Vauxhall, and after I dropped off the camera we WENT TO A PUB!!! My first pub outing in more than a year! We sat out on the sidewalk in front of a place called The Doghouse and had a couple of pints, and it felt very refreshing to live so normally. We watched pedestrians and were approached by a panhandler and saw a motorcyclist yell at a bicyclist in a case of road rage. Welcome to London!

I still experience a little frisson of anxiety when I'm around groups of strangers. I suppose it will take a while for that to dissipate. It's like we all have to re-learn how to socialize, you know?
Posted by Steve Reed at 6:18 AM